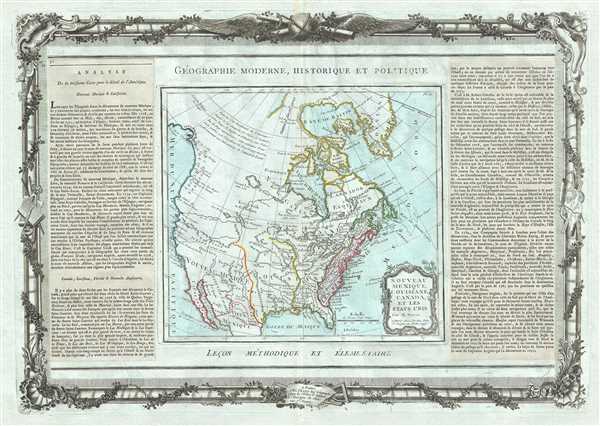 A rare and highly unusual 1786 map of North America by Desnos and Brion de la Tour. It depicts North America according to the French conception with a northwest passage extending west from Hudson Bay towards Lake Winipigue, then along the mythical 'R. de L'Ouest' to the 'Entree de Martin d'Aguilar' (likely the entrance to Columbia River). The main body of the map is divided into three sections, Nouveau Mexique, extending west of the Rio Grande, Louisiana between the Rio Grande and a fledgling United States, and along the eastern seaboard, the United States.

Nouveau Mexique includes the mythical kingdoms of gold Quiviara and Toguayo as well as more accurate indications for American Indian Tribes, missions, and rivers. Louisiana is divided into two regions, Floride, which contains all of the territory between the appellations and the Mississippi, and Louisiana proper. The United States is relegated to a narrow region along the Atlantic coast bounded on the west by the Appellation Mountains and completely excluded from access to the Great Lakes – possibly referencing a French claim to the region.

The earliest variant on this map was published in 1866 and varied only in that 'Nlle. Angleterre' was replaced with 'Etats-Unis' in later editions. A beautifully engraved title cartouche adorns the lower right quadrant of the map. To the left and right of the map are paste downs of French text with remarks and description of the map. Surrounding the whole is an elaborate decorative border featuring floral arrangements, surveying tools, elaborate baroque scalloping, and a winged globe. This map was issued as plate no. 51 in the most deluxe edition of Desnos’ 1786 Atlas General Methodique et Elementaire, Pour l’Etude de la Geographie et de l’Histoire Moderne.