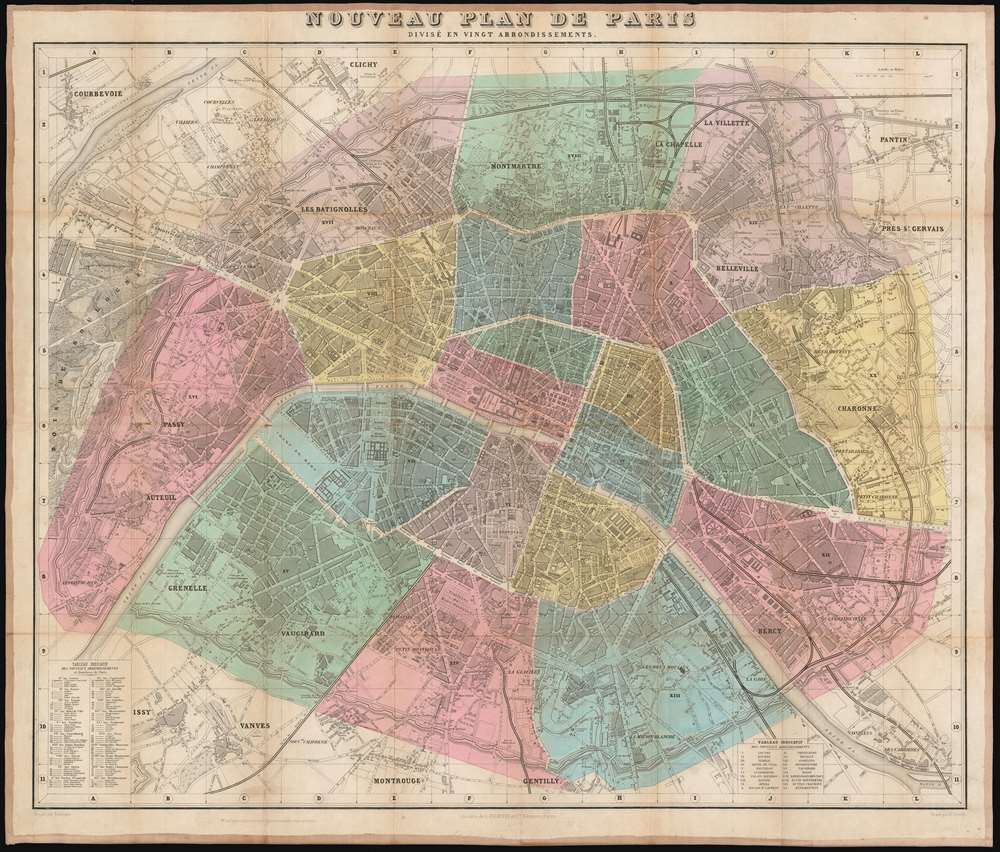 A beautiful city map of Paris after Haussmannization.

This is a beautiful 1870 Alexandre Vuillemin folding plan or map of Paris, France. Centered on the Seine River, the map depicts embastilled Paris as contained in the Thiers Wall, from the Bois de Boulogne to the Porte de Montreuil and from Clichy to Montrouge. Divided according to 20 arrondissements, each arrondissement is labeled with a Roman numeral and shaded a different color, to allow for easy differentiation. Streets, monuments, gardens, and churches are labeled throughout the city, with the Louvre, the Jardin des Tuileries, Notre Dame de Paris, and the Jardin du Luxembourg among them. Another of the major changes to Paris reflected here were the annexations of eleven communes outside the ring of fortifications surrounding the city, including Montmartre, Passy, La Villette, and Belleville, which expanded the city's system of arrondissements from twelve to twenty. A table in the lower left corner details these new arrondissements.

Published in 1870, the transformation of Paris by Emperor Napoléon II and Baron Georges-Eugène Haussmann were. 'complete', since Haussmann was dismissed as Prefect of the Seine that year. The work, however, continued until 1927. Known in French as the 'Grands Travaux,' Haussmann's redesign of Paris defined it as a modern city, with narrow alleyways and confusing streets replaced by a broad network of grand boulevards, imposing facades, parks, and monuments. Some of the more famous parts of Paris today, including the famous design of Étoile, where the Arc de Triomphe is located, were constructed during Haussmann's tenure as Prefect.

This map was drawn by Alexandre Vuillemin and engraved by E. George for publication by Hachette and Company in 1870. The OCLC records examples as being part of the institutional collections at the Getty Research Institute, the Bibliothèque nationale de France, and Utrecht University.

Good. Mounted on linen. Exhibits some loss at fold intersection. Blank on verso.