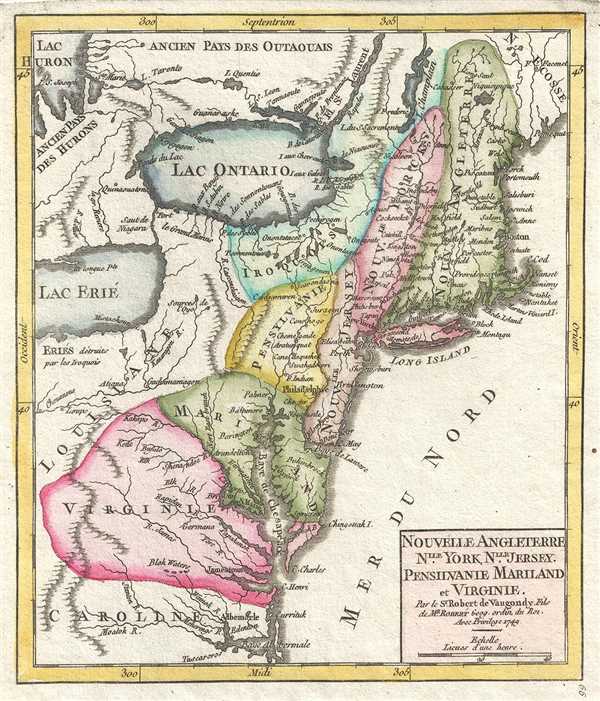 Uncommon map of the English Colonies in North America on the cusp of the French and Indian War.

This is a hand colored 1749 Didier Robert de Vaugondy map of the English Colonies in North America, including New England and the Mid-Atlantic colonies, on the cusp of the French and Indian War (1754 – 1763). The organization of the map is significant, with the French controlled Great Lakes dominating the map. The English colonies, which are disproportionally reduced, hug the coast but, save through their alliance with the Iroquois federation, have no access to the Great Lakes. Similarly, Pennsylvania, Virginia and Maryland are limited to lands east of the Appalachian Mountains, reflecting the French claims that would soon lead to war.

The map depicts from Lake Erie and Lake Huron on the left to the Atlantic Ocean on the right and from Lake Huron and New Scotland at the top to North Carolina and Albemarle (Albermale) Bay at the bottom. The map depicts the colonies of New England (Nouvelle Angleterre), New York (Nouvelle Yorck), Pennsylvania (Pennsylvanie), Maryland (Mariland), Virginia (Virginie), and Carolina (Caroline). Louisiana is labeled, which at this point in history was French territory. The Iroquois nation is also depicted.