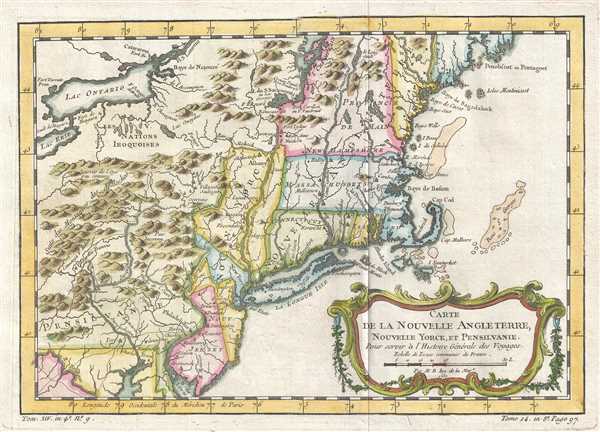 Map of New England during the French and Indian War.

This is a Jacques-Nicolas Bellin map of New England. The map depicts the region from Lake Erie to the Atlantic Ocean and from Lake Champlain to the extreme northern portion of the Chesapeake Bay, including some or all of the states of New York, Massachusetts, Pennsylvania, New Jersey, Connecticut, Rhode Island, Vermont, New Hampshire, and Maine. Numerous cities and towns are labeled throughout, including New York, Boston, Cambridge, Philadelphia, New Haven, and Salem. American Indian tribes and settlements are also identified, including the Five Iroquois Nations, while others are referred to simply as villages sauvages. Several rivers, lakes, and mountain ranges are also illustrated.

Bellin's Map and the French and Indian War