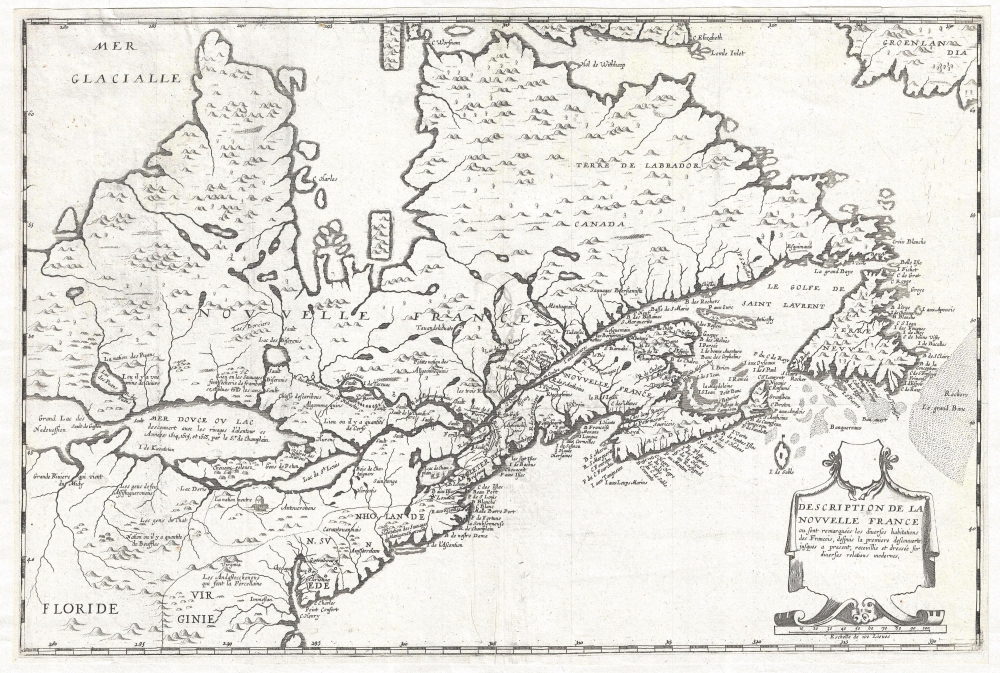 A rare separately published map considered the to be the first to illustrate all five of the Great Lakes. Drawn by Jean Boisseau, this map is cartographically derived from Samuel de Champlain's important map of 1632 with some important changes. The map covers from Hudson Strait to the Chesapeake Bay and from Lake Huron to Greenland.

The claim that his is the first map to illustrate and name all five of the Great Lake is here broken down by Burden,

Lac St. Louis (Lake Ontario) leads upriver to a reduced size Lac Derie (Lake Erie), this was because Champlain, unaware of its size, had only second-hand knowledge to rely upon. This leads to a more recognizable Mer Dovce ou Lac (Lake Huron, the freshwater sea, and Grand Lac (Lake Superior). Lake Michigan is believed by some authorities to be represented by the river system leading into it from the south called Grand Riviere qui Vient du Midy. However, on Sanson' Map of 1650 Lake Michigan is represented by Lac des Puans, which is here name to the north-east of Grand Lac. On Champlain's map both Lakes Erie and Michigan were unnamed. Although the configuration and size of them are incorrect, this is the first map to delineate and identify all five Great lakes. The Ottawa River is named R. Des Algonmequins, and leads from I. de Montreal upriver to Lac des Biserenis (Lake Nipissing)

This map exists in two states. The first state was issued in 1643 and is dated as such. The second state, offered here, has no date and latitude and longitude have been added. Moreover, while in the first state, with the exception of the Chesapeake Bay Chesapeacq Bay the English presence in North America is not recognized and the remaining nomenclature is entirely French. In the second state additional place names relating to Dutch, English, and Swedish colonies are added including Floride, Virginie, N. Suede, N. Holande, and N. Angleterre.

Jean Boisseau (fl. c. 1631 – 1657) was a French cartographer, publisher and enlumineur (colorist) active in the middle of the 17th century. Boisseau produced a number of important maps and atlases, including his 1643 reduction of Champlain's map, entitled Description de la Nouvelle France, identified as the first to name all five of the Great Lakes. He also produced the famous Colonel's Plan of Paris, and an important atlas, Tresor des Cartes Geographiques, arguably the first French world atlas. He held the post of Enlumineur du Roy pour les cartes geographiques and his work as a colorist is evident in map maps of the period from Royal libraries. Learn More...