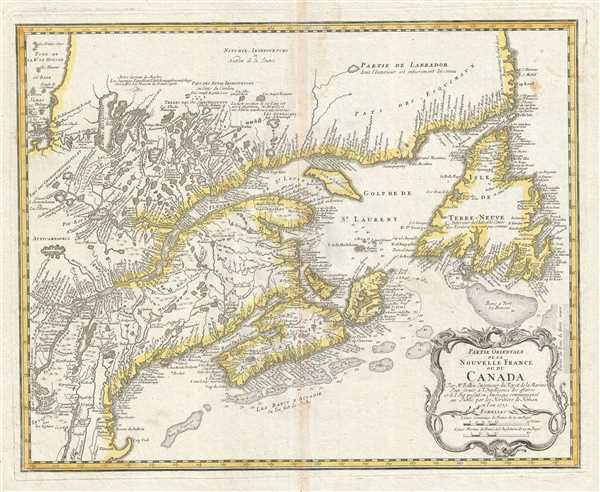 This is a beautiful 1755 map of eastern Canada and New England by Homann Heirs. Extends from Lake Ontario, St. Lawrence River and Cape Cod north to Newfoundland, Cap Rond and the Hudson Bay. The map renders the entire region in extraordinary detail offering both topographical and political information with forest and mountains beautifully rendered in profile. Rivers, lakes, shoals, soundings, missions, American Indian tribes, and early settlements are noted.

This map is an updated and revised version of the original work by the French Hydrographer Jacques-Nicolas Bellin. Centered on the St. Lawrence River, the map focuses on the French claims on the Maritime provinces of the region. Boston Harbor (Havre de Baston) and a primitively shaped Cape Cod are identified.

The map is significant on many levels, not the least of which is its presentation, from a French perspective, of the territorial alignments and claims of North America shortly prior to the outbreak of the French and Indian War. Most consider the French and Indian War to be a microcosm of the global Seven Years' War. It was however notably distinct both in that it began before that larger hostilities in Europe and that most of the major battles involved primarily parties only loosely aligned with the French or English - most specifically American Indians and lawless frontiersman, who had their own political agenda. The war began with French incursions into western Pennsylvania and other territories claimed simultaneously by French, English, and American Indian forces. Some important French forts are also identified, including Louisbourg on Isle Royale or Cape Breton Island. St. John, the capital of Newfoundland and the at the time the oldest English Colony, Port La Joye, the main French town on Prince Edward Island and the British naval base at Halifax are also identified.

A large and beautiful title cartouche in included in the lower right quadrant. Overall, this is a beautiful map of the North American theater of the Seven Years' War.