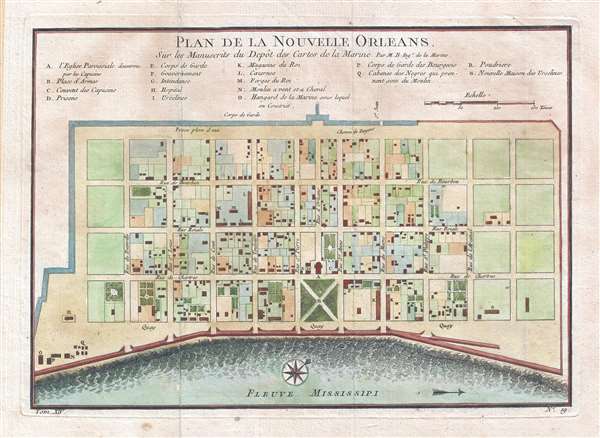 This scarce 1744 map by J. N. Bellin is the earliest obtainable map of New Orleans, Louisiana. Oriented to the east, Bellin's map covers the original settlement of New Orleans along the Mississippi River and inland as far the Fosse plein d'eau (roughly translated: 'Pit full of Water') near modern day Dauphine Street, and from modern day Iberville Street (shown but not named) to modern day Barracks Street (shown but not named). The map illustrates about 100 buildings with 18 specifically identified via an alphabetically coded table set just above the map.

There are several editions of this map, although after the first state, distinguishable for the inclusion of the engraver's name in the lower right margin, it is difficult to distinguish specific editions. The present example most likely dates to a 1745 or 1746 edition. Bellin originally prepared this map to illustrate Pierre François Xavier de Charlevoix's Histoire et description generale de la Nouvelle France. Later editions, most with slight modifications, were issued to accompany Provost's Histoire des Voyages and reissues of Charlevoix.