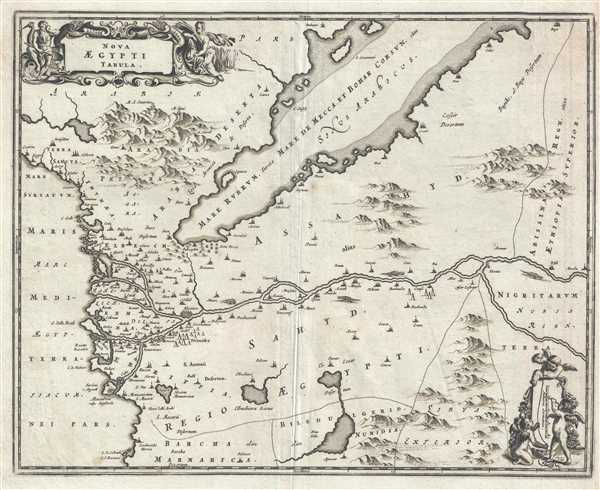 This is a 1686 Olfert Dapper map of Egypt and the western Middle East. Oriented towards the east, the map depicts the region from the Mediterranean Sea to Abyssinia, or approximately modern-day Ethiopia, and from the Arabian Peninsula past the Red Sea and the Sinai Peninsula to Libya. A rather detailed depiction of the region, numerous cities are labeled, including Cairo and Alexandria in Egypt and Jerusalem and Hebron in the Holy Land (Terra Sancta, as it is labeled on the map). The vast majority of the cities are situated along the Nile, which appears to divide the map in two before branching out into the Nile Delta. This allowed the cities a secure source of water. The Pyramids at Giza are illustrated, although a great number more than are actually present in Giza. Mountains are illustrated in southern Egypt, Libya, and the Arabian Peninsula, one of which bears the label Mt. Sinai. Several large lakes are illustrated near the bottom border of the map, which may correspond to the handful of small oases which are still located in that general area. A decorative title cartouche is situated in the upper left corner, while a decorative cartouche, surrounded by cherubs, in the lower right corner bears the scale.