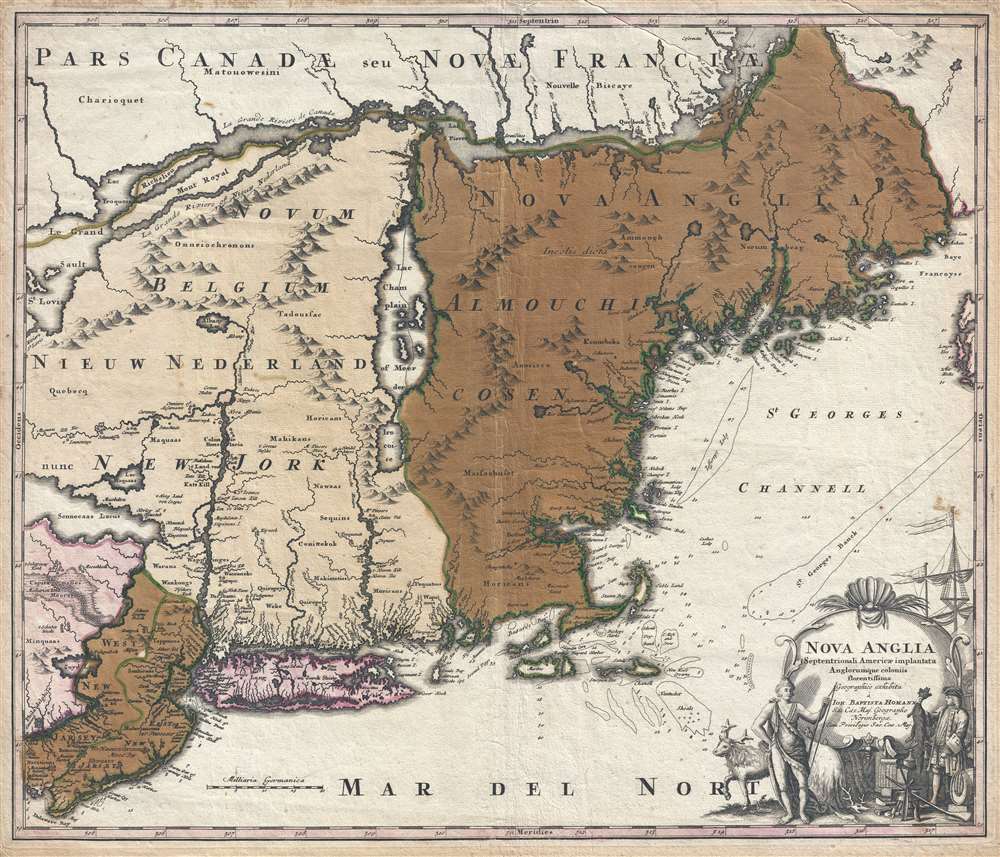 An iconic map of New York and New Engalnd!

A significant though often overlooked piece, this is J. B. Homann's c. 1716 map of New England, New York, and New Jersey. Though titled 'Nova Anglia,' (New England) Homann's map actually covers a much broader area from New France (Canada) to the Delaware Bay, and from Philadelphia to Nova Scotia, inclusive of all of New England, New York, and New Jersey, as well as parts of adjacent Canada and Pennsylvania. The map identifies both European and American Indian settlements, differentiating between the two by rendering indigenous settlements as pictorial villages, huts and all, and European towns as small circles, major cities like Philadelphia and Boston being the exception.

Most Europeans were content to follow the example of the gentleman in our cartouche by letting the more skilled American Indians trap beavers and other fur-bearing animals, then acquiring them through trade along the coastline at various inland depots. As the cartouche work suggests, guns and metal tools were the primary currency despite being specifically forbidden by the crown - for obvious reasons. Consequently, little was known of the interior aside from vague offered up by secretive Indians and a few early probes mostly associated with river systems. The Hudson River had not been explored beyond Albany. Although, the French explorer Samuel de Champlain had mapped Lake Champlain in 1609, challenges in determining Longitude caused him to place the lake well east of its actual location. Fur traders had also heard of the lake from the American Indians with whom they did business. To them, it was the ultimate source, a sort of Beaver Shangri La, however, they knew it by another name, Lake Iroquois - after the tribal confederation that dominated the area. Here Lake Champlain is properly labeled and, Lake Iroquois, just to the south, is now doubt Lake George.

Norombega appeared on maps from as early as the late 1500s.