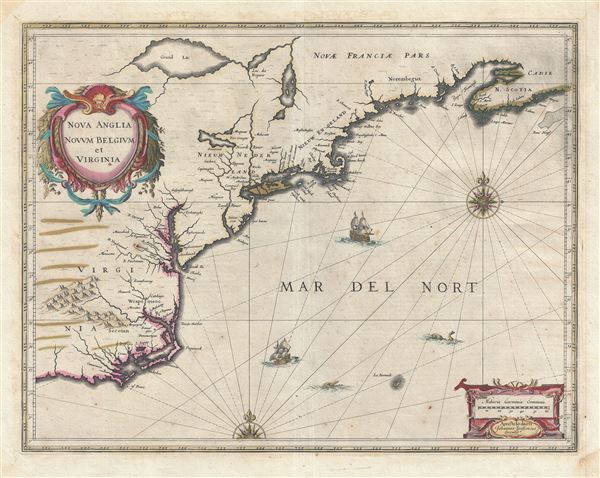 A large decorative title cartouche of a baroque ethic in the upper left quadrant present's the map's title Nova Anglia Novum Belgium et Virginia. The title sets the stage for the map as a whole, which can best be understood as a pageant of conflicting colonial and economic interests, in particular rivalries between English, Dutch, and French colonies. The very title, in which Nova Anglia supersedes Novum Belgium (named after the Belgian based Walloon Protestants who were the primary backers of the Dutch West India Company), exemplifies many of these issues. In subsequent editions of this map Jansson reversed the title order giving Novum Belgium precedence.

Jansson centers the map on New Nederland and more specifically on the Hudson Valley, sandwiched between English colonies in Nieuw Engeland (New England) and Virginia (Jamestown). Along the Hudson, identified using the Dutch term Noorde Rivier, Fort Orange (near modern day Albany) and New Amsterdam (New York) are identified. As this map was being drawn English and Dutch trappers would have been in fierce competition over the peltries along the Hudson, Connecticut (here Versche Rivier), and Delaware (here Zuydt Rivier) Rivers. These rivalries would eventually escalate into the English takeover of New Amsterdam in 1664 and its subsequent reassignation as New York.

The region of modern day Maine is identified using the archaic term Norembegua. This mysterious land appeared on many early maps of New England starting with Verrazano's 1529 manuscript map of America. He used the term, Oranbega, which in Algonquin means something on the order of 'lull in the river.' The first detailed reference to Norembegua, or as it is more commonly spelled Norumbega, appeared in the 1542 journals of the French navigator Jean Fonteneau dit Alfonse de Saintonge, or Jean Allefonsce for short. Allefonsce was a well-respected navigator who, in conjunction with the French nobleman Jean-François de la Roque de Roberval's attempt to colonize the region, skirted the coast of south of Newfoundland in 1542. He discovered and apparently sailed some distance up the Penobscot River, encountering a fur rich American Indian city named Norumbega - somewhere near modern day Bangor, Maine.

Several ships ply the seas and compete with two decorative compass roses, a recognizable Bermuda, and a secondary cartouche in the lower right quadrant featuring Jansson's imprint as well as a distance scale. This map was issued for the 1636 Appendix Atlantis Oder dess Welt Buchs but examples can also be identified in various editions of Mercator's Atlas Novus which was published in the same year. The present example, being a first state, features French text on the verso indicating that was extracted from the 1639 issue of the Nouvel Atlas.