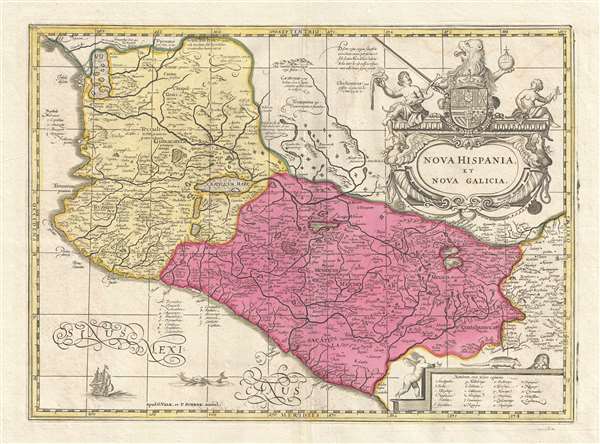 A beautiful and some would say underappreciated map of central Mexico.

This is a scarce and often underappreciated c. 1690 Petrus Schenk and Gerard Valk map of Mexico or New Spain. Depicting the viceroyalty granted to Hernan Cortez following his conquest of the Aztec Empire, this map details, roughly, from Mexico City westward to the Pacific coast and northward as far as modern day Michoacán. Cartographically, Schenk and Valk's map is based on one by Mercator and Hondius, which was heavily influenced by Ortelius' 1579 map of the same region. Though we are uncertain of Ortelius' sources, this map exhibits a combination of known and speculative cartographic elements. Mexico City appears at right center surrounded by water as it appeared at the time of the conquest. By the time Mercator created the map that inspired this one, much of the region between Mexico City and the Pacific ports along the coast, as well as the mining regions to the north and west, had been roughly mapped by the conquistadores. Lake Chapala (Chapalicum Mare), for example, is accurately situated and formed. However, as the map extends further north into only tenuously explored regions, the cartography becomes more speculative. The large inland sea in the northwestern quadrant with is four numbered and named islands is clearly drawn from indigenous legends, most likely as transmitted via the Codex Mendoza. An elaborate baroque title cartouche is situated in the upper right quadrant, while a key is included in the lower right corner.

This map was published c. 1690 by Petrus Schenk and Gerard Hondius.