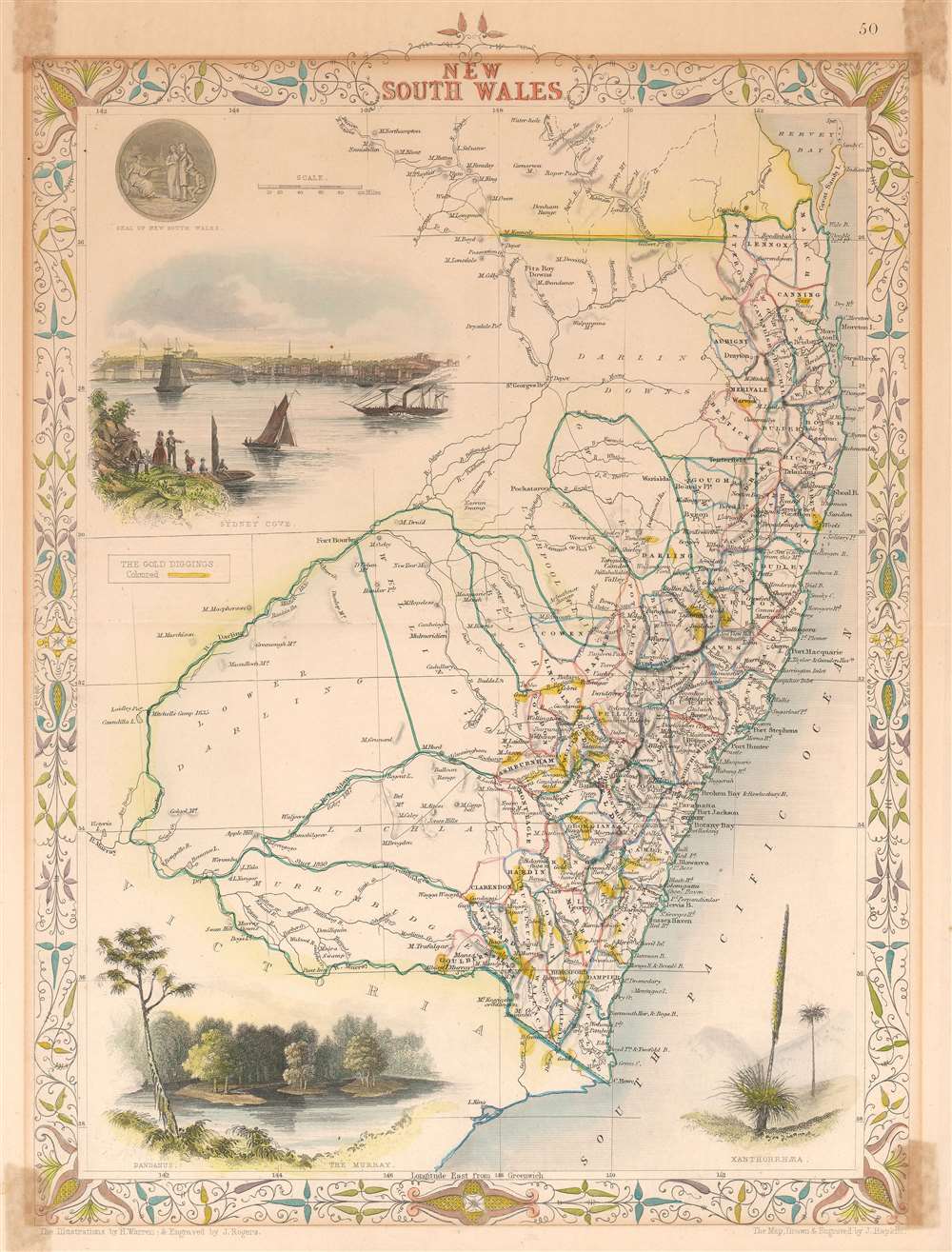 Highlights numerous gold claims across New South Wales at the beginning of the Australian Gold Rush.
$200.00

This is an 1850 John Tallis map of New South Wales, Australia highlighting the many gold claims peppered throughout the region. The map depicts eastern Australia from the Great Sandy Island south past Sydney to Cape Howe and extends a considerable distance inland despite the region being only tenuously mapped. Gold claims are marked by dashed lines and highlighted with bright gold colored ink. Beautiful illustrations by H. Warren depicting The Murray, a Xanthorrhaea (a plant endemic to Australia) and the Sydney Cove are also present. The seal of New South Wales is situated in the upper left corner. The map also notes the 1817 John Oxley's 1817 route is traced, along with that of Charles Sturt. The whole has the highly decorative presentation and elaborate border distinctive of Tallis maps.

John Tallis (November 7, 1817 - June 3, 1876) was an English map publisher and bookseller. Born in Stourbridge in Worcestershire, worked in his father's Birmingham agency from 1836 until 1842. Roughly in 1838, Tallis published a collection of London Street Views, and entered into a partnership with his brother Frederick Tallis from 1842 - 1849. Tallis and Company also published the Illustrated Atlas of the World in 1849. Also in 1849, Tallis traveled to New York City where he founded publishing agencies in six American cities. Upon returning from New York, Tallis paid his brother £10,000 for his share of the business, and operated from then on as John Tallis and Company until 1854. By 1853, John Tallis and Company had agencies in twenty-six cities in the United Kingdom, the United States, and Canada and employed over 500 people. By the end of 1853, Tallis had made the decision to share the burden of running such an extensive company and formed the London Printing and Publishing Company on February 24, 1854, becoming co-managing director with Ephraim Tipton Brain. After a series of setbacks, however, Tallis had to sell his estate and by 1861 was declared bankrupt. He was kept afloat by the kindness of friends and former employees, but none of his 'various ambitious projects' ever worked out for the rest of his life. Tallis married Jane Ball on December 6, 1836 in Birmingham, with whom he lived until her death in 1862. Tallis remarried on June 27, 1863 to Mary Stephens, with whom he had two children. Learn More...

Good. Exhibits soiling in all four corners. Blank on verso.
Looking for a high-resolution scan of this?