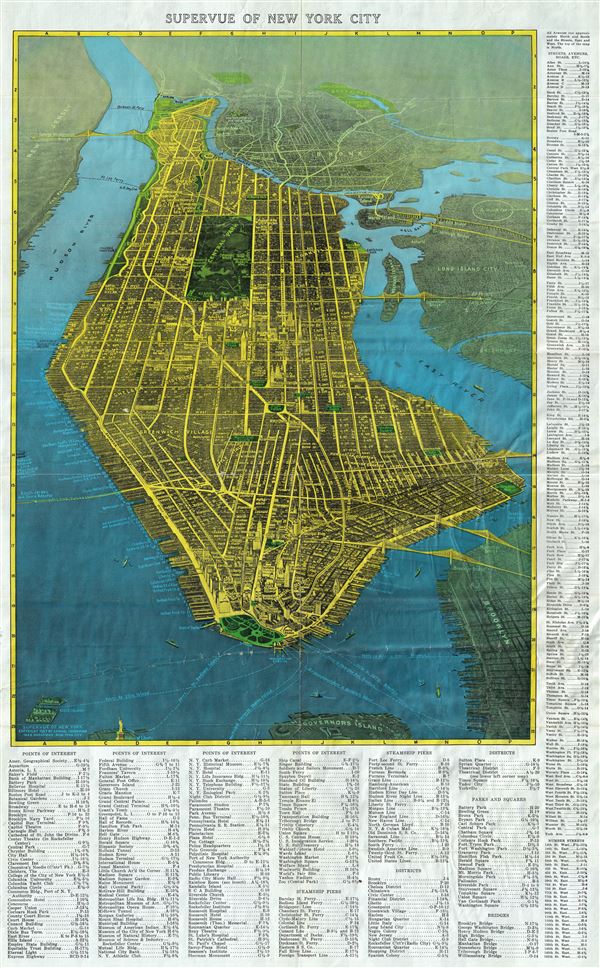 This is a stunning 1937 bird's eye view map or view of New York City, by Samuel Freedman. The view covers all of Manhattan Island and extends from Liberty Island and the northern end of Governor's Island to Harlem River. It also covers parts of New Jersey, the Bronx, Queens and Brooklyn. The map notes streets, piers, parks, squares, ferry lines, neighborhoods, and other topographical features. Major buildings and monuments such as the Statue of Liberty, the Empire State Building, Grand Central Station, City Hall, Rockefeller Center, Central Park, among others are rendered in profile. Bridges are also beautifully rendered, with ships sailing in the harbor. A Street index is included in the right margin while the bottom portion of the map includes a list of points of interest, piers, parks, squares and bridges. Verso of the map includes additional important tourist information including famous landmarks, libraries, churches and other New York City amusements. Also includes three additional maps, including a map showing the routes of the Interborough Rapid Transit Company (the original operator of the New York City Subway), BMT lines and a map of the locations of stations on the eight avenue subway. This particular map was issued as New York Latest Illustrated Map on Colors by the Supervue Map and Guide Co., and was copyrighted by Samuel Freedman in 1937.

Samuel Freedman (September 15, 1880 - 19xx) was a Russian-American printer and publisher active in New York City during the first half of the 20th century. Born in Bolnik, Russia, Freedman immigrated to the United States in 1887. Freedman owned his own printing shop by 1925 and continued to operate it through at least 1940. He was married to Anna Freedman, with whom he had at least three children, two daughters, and one son. We have been unable to locate any death records for Samuel Freedman. Learn More...

Very good. Some wear along original folds. Maps and text on verso. Folds into original paper binder. Text on verso.
Looking for a high-resolution scan of this?