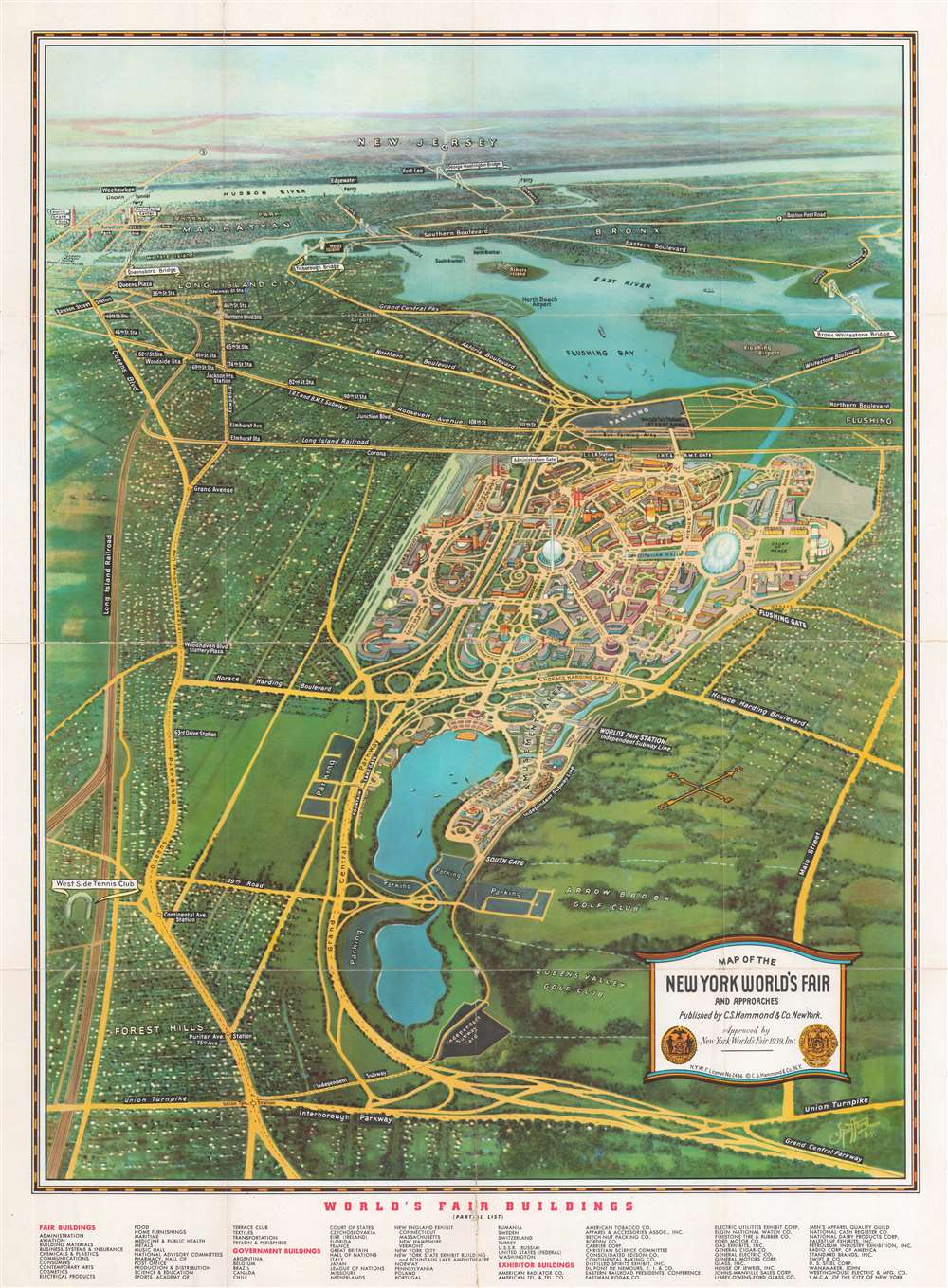 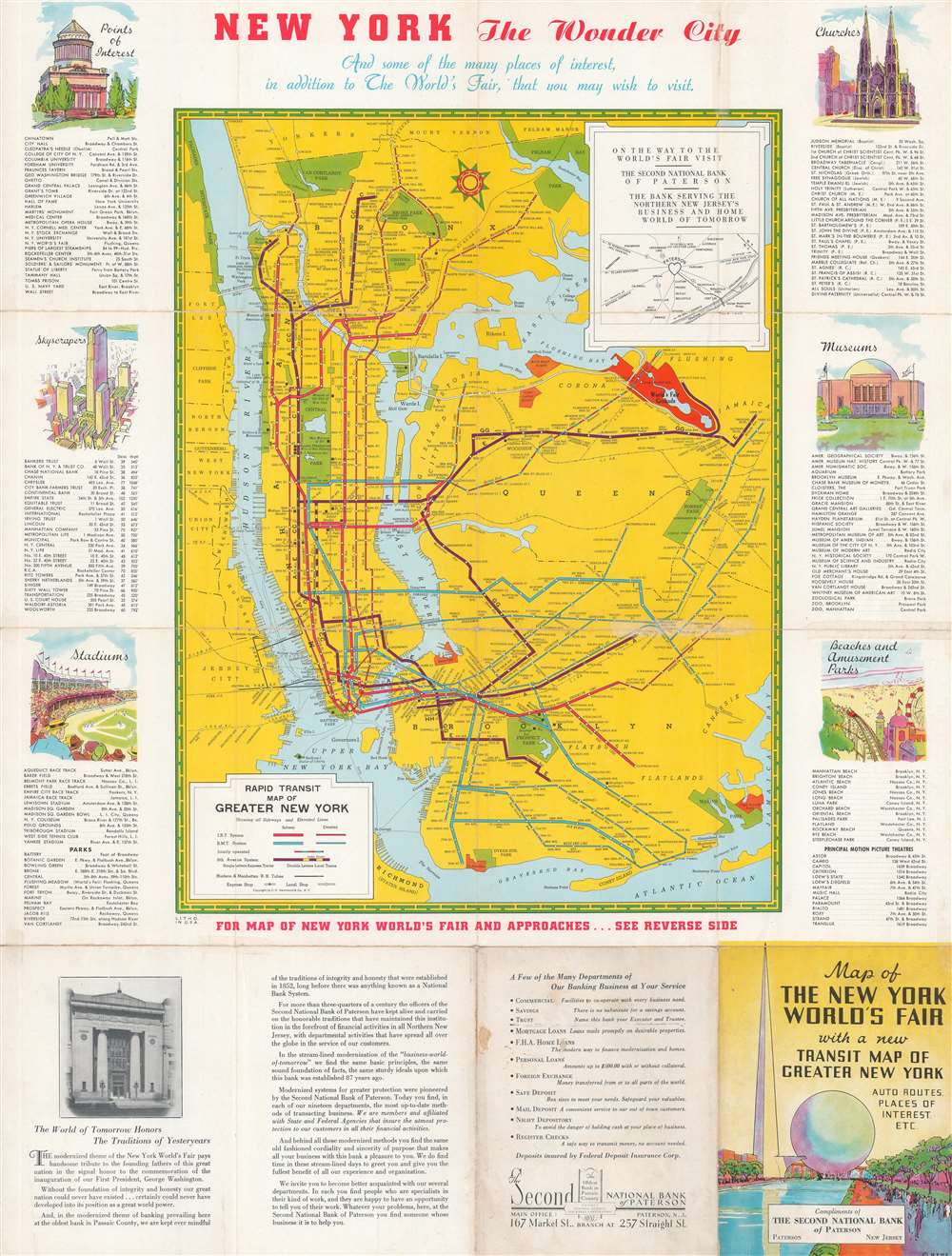 This is a 1939 Edward V. Spofford bird's-eye view map of the 1939 New York World's Fair. Overlooking the fair from a fictional highpoint to the east, many of the fair's buildings are illustrated. The famous Trylon and Perisphere are immediately recognizable. 'Streets' throughout the fairground are identified, along with Constitution Mall and several 'courts'. Subway stations, bus parking areas, and the Long Island Rail Road station are also labeled. Outside the World's Fair, main thoroughfares and subway lines recognizable in Queens, the Bronx, and Manhattan as far south as 34th Street and the Empire State Building. The Queens Midtown Tunnel is labeled as being under construction. Central Park, Rockefeller Center, and the Lincoln Tunnel are also identified.

A map of the New York Subway occupies three-quarters of the verso. The B.M.T. and the I.R.T. are differentiated and elevated and subterranean lines are separated out. An index split between the left and right borders lists museums, skyscrapers, stadiums, churches, beaches, amusement parks, and other points of interest. An advertisement for Second National Bank of Paterson in Paterson, New Jersey occupies the bottom quarter of the sheet. The map was provided compliments of the bank. Likely, this section of the map was reserved to promote any business that paid to distribute copies of the map before and during the fair.

The 1939 - 1940 New York World's Fair took place in Queens at Flushing Meadows - Corona Park. During its two exhibition seasons, over forty-four million people attended. It was also the second most expensive World's Fair in the United States, behind the 1904 Louisiana Purchase Exposition in St. Louis, Missouri. World War II began four months after the fair opened and many of the displays were affected, particularly those pavilions of countries under Axis occupation. After the fair closed in 1940, many of the European staff were unable to return home, so they stayed in the United States.

This map was drawn by Edward V. Spofford and published by C.S. Hammond and Company in 1939. It is well represented in institutional collections but scarce on the market.

Edward V. Spofford (1895 - May 21, 1940) was an American commercial artist. Born in Wichita, Kansas, Spofford's family moved to Brooklyn, New York, in his youth. He attended Manual Training High School in Brooklyn. Spofford served in the U.S. National Guard in World War I and served overseas from May 10, 1918 through March 6, 1919 and served as the supply sergeant of Company 4, 106th Infantry. He was wounded in action on October 17, 1918. He mustered out on April 2, 1919. After the war, Spofford worked as a commercial artist and in advertising. He had a studio at 366 Madison Avenue in Manhattan. He died suddenly of a cerebral hemorrhage on May 21, 1940. He married Dorothy A. Hanan on June 9, 1921, with whom he had two daughters, Jane and Mary. Learn More...