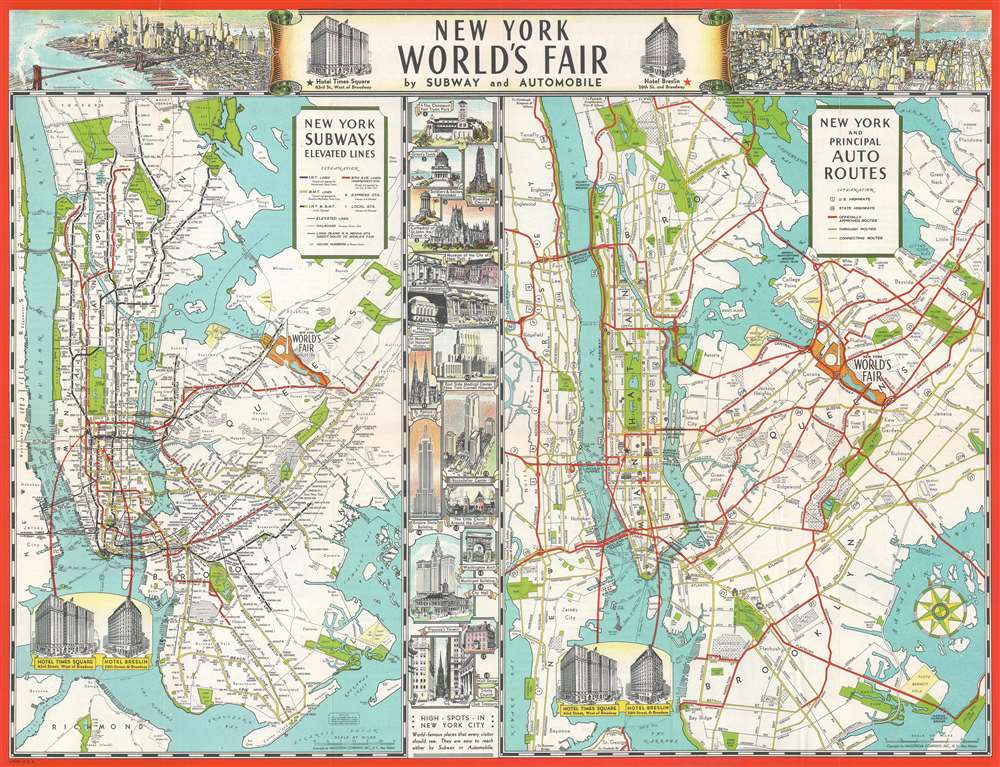 A wonderful promotional piece for the 1939 New York World's Fair highlighting travel routes to the fair and all that the city has to offer visitors.

A promotional piece for the 1939 New York World's Fair, this c. 1939 Hagstrom map combines a New York City subway map and a map of road routes to the World's Fair together on one sheet. Both maps illustrate generally the same area from New Jersey to Nassau County on Long Island and from Westchester County to The Narrows. The grounds of the World's Fair in Queens are shaded orange and include an illustration of the Trylon and Perisphere, the monumental constructions that became the symbol of the fair.

More detail is included in New Jersey in the road map, allowing travelers by car to have a better understanding of how to navigate the routes to the fair. On the other hand, significant detail is depicted in the five boroughs of New York City on the subway map, as nearly every subway station is marked, the I.R.T., B.M.T., and Independent lines are illustrated by different colors, and elevated lines (most of which have since been dismantled) are included as well.

Eighteen vignettes sites around Manhattan, including the Metropolitan Museum of Art, the Empire State Building, and Rockefeller Center, separate the two maps. Each vignette is numbered and labeled, with these numbers appearing inscribed in black circles on the auto route map. Other sites, such as Grand Central Terminal and Penn Station, are sketched on the auto route map as well. The Hotel Times Square and the Hotel Breslin are drawn in profile on both maps and marked by stars. They also flank the map's title along the top border. Two aerial views of New York City are also situated along the top border. A view of Lower Manhattan and the Financial District is included on the left, which includes the Brooklyn Bridge. On the right is a view of Midtown looking to the east, with both the Empire State Building and the Chrysler building prominently illustrated. The Trylon and Persiphere are visible on the horizon at the top of the view.

This map was created and copyrighted by Hagstrom and distributed by the Hotel Times Square and the Hotel Breslin c. 1939. We have been unable to locate any examples of this map in institutional collections and it is scarce on the private market.

Very good, Light wear along original fold lines. Text and printed photographs on verso.
Looking for a high-resolution scan of this?