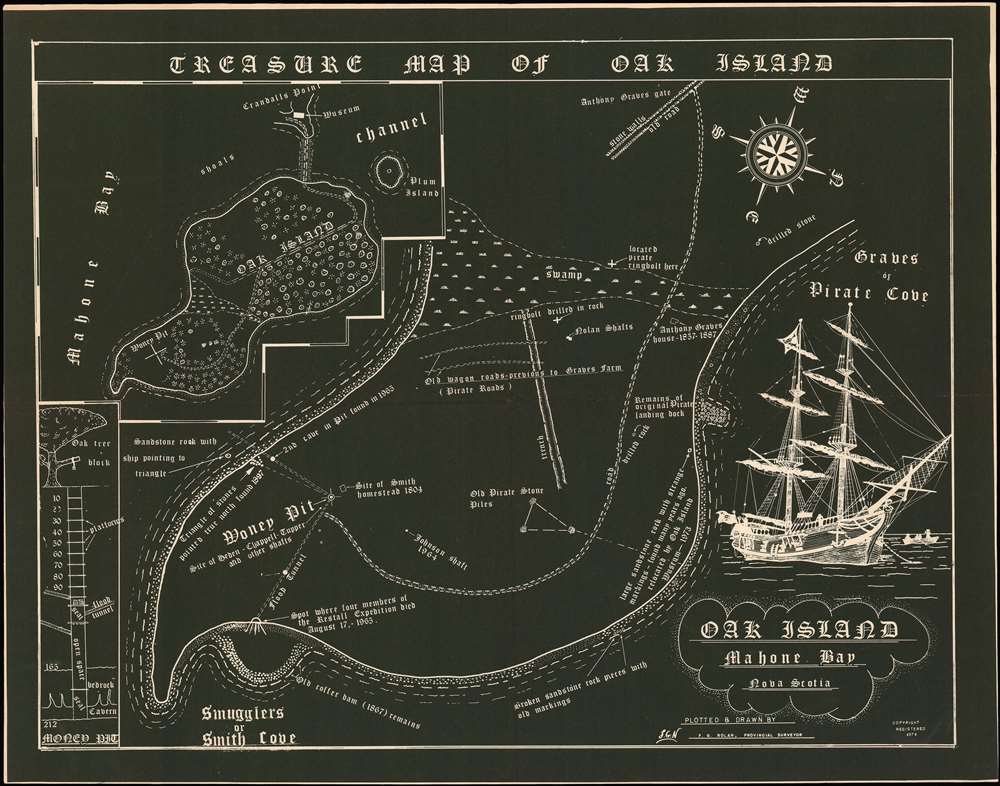 The mystery of Oak Island by one of its greatest Treasure Hunters!

A rare 1974 map of the treasure hunter haven of Oak Island, Nova Scotia. The map was drawn and published by the surveyor and treasure hunter Frederick G. Nolan, and illustrates his attempts to uncover the mysterious Oak Island treasure trove. The map is roughly oriented to the west and focuses on the eastern 3rd of the Island, where the fabled Money Pit is located. Much of this land was, at the time, Nolan's property, particularly the central swamp zone, illustrated on the present map. The Money Pit itself, as well eastern end of the island, was owned by competing treasure hunter William Chappell. Several sites of interest are noted, including the original Money Pit, the site of the Restall Disaster (1965), the 'original pirate landing dock', the swamp, a 'pirate ringbore', 'pirate roads' and more. An inset details the island as a whole, including the site of Nolan's Museum on nearby Crandall's Point. A second inset offers a profile of the Money Pit itself to 212 feet. A pirate ship appears on the lower right quadrant.

The Money Pit of Oak Island

Oak Island is a small island off the coast of Nova Scotia distinctive for its density of oak trees, uncommon on other islands in the region. According to legend, in 1799 Daniel McGinnis noticed a depression in the ground under a tree. Familiar with folk tales of a buried treasure related to the notorious pirate Captain Kidd, he began digging in the location that would later become known as the Money Pit. It is said that after 2 feet he discovered a layer of flagstones and at 10 feet, oak platforms. The platforms continued at 10-foot intervals until about 90 feet, but McGinnis stopped digging at 30, citing 'supernatural dread.' In 1802 another group, the Onslow Company, took over the search, pushing the excavation to 90 feet, discovering layers of logs, charcoal, putty, coconut fiber, and a large inscribed stone with undecipherable symbols. They removed the stone and, overnight, the pit flooded with some 60 feet of icy ocean water. Apparently, the removal of the stone triggered some sort of ingenious mechanism that opened secret flood tunnels. This flooding continues to confound treasure hunters today. Subsequent hunters tried various approaches, spending fortunes to ultimately excavate the money pit and secondary bores to over 200 feet in depth, generally with little to show for it. Today, Oak Island is 50% owned by Rick and Marty Lagina, with the other 50% owned by elderly treasure hunters David Blankenship and the heirs of competing hunter Frank Nolan - maker of this map. The Lagina brothers are spearheading yet another attempt to discover the treasure, throwing wealth, resources, modern technology, and the Discovery Channel at the centuries old mystery. Although the Money Pit continues to confound the Laginas, they have made significant discoveries, among them Knights Templar relics, ancient jewelry, and even some gold!

Nolan felt that his skills as a surveyor would enable him to succeed at Oak island where other treasure hunters failed. In 1963 Nolan acquired the central part of the island and, despite conflicts with Chappell, who owned the remainder of the island, proceeded to complete a meticulous survey. Nolan ran transit lines, identifying his greatest contribution to the treasure hunt, the discovery of what has become known as Nolan's Cross, a series of large stone markers which, if a line is drawn between them, form a huge cross. Nolan also constructed a museum at Crandall's Point, at the entrance to a causeway leading to the island. This map, clearly intended for the tourist market, was probably issued for sale to tourists at the museum. It illustrates some of Nolan's survey work and discoveries, which he believed would point the way to the great treasure.

This map was 'plotted and drawn' by Frederik G. Nolan. The odd in-negative illustration, gives the impression that the original survey may have been a blueprint - not surprising given Nolan's experience as a surveyor. The map was probably issued in limited quantities for sale in Nolan's short-lived Museum of Crandalls Point. Today all examples of this intriguing map are exceedingly rare.

Frederick G. Nolan (July 5, 1927 - June 4, 2016) was a Canadian surveyor and treasure hunter active in Nova Scotia during the second half of the 20th and early 21st centuries. Nolan was born in Halifax, Nova Scotia. Along with his brother, he operated the firm of Nolan Brothers Surveys, in Nova Scotia, receiving the designation Provincial Land Surveyor. In the 1960s, Nolan became obsessed with the Mystery of Oak Island, supposedly the home to a great buried treasure inaccessible due to a complex network of boobie traps that consistently flood the treasure shaft - known as the Money Pit. While other treasure hunters before Nolan searched the island rigorously, Nolan felt he had an advantage due to his expertise as a surveyor. Unfortunately, like most hunters of lost treasure, he died without unearthing the treasure. Learn More...

Very good. Minor wear on original fold lines.
Looking for a high-resolution scan of this?