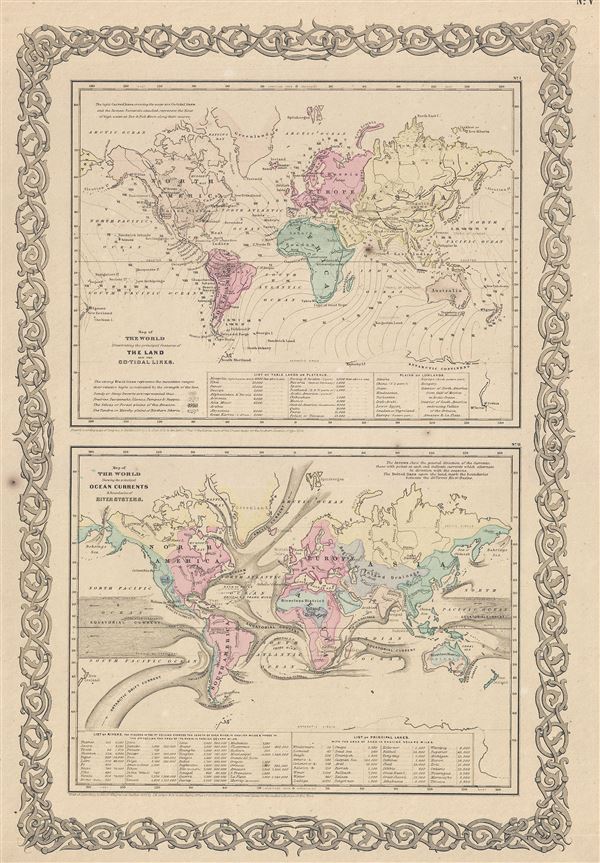 A beautiful 1855 first edition example of Colton's map of land features and ocean currents. The map is divided into two parts. The upper map depicts the principle features of land, and the co-tidal lines. Colors coded according to continent, countries in the upper map are labeled but their political boundaries are not shown. Small paragraphs in the upper and lower left corners contain information about the markings on the map. A table at the bottom of the map lists Table Lands or Plateaus and Plains or Lowlands.

The lower map depicts the principle ocean currents and boundaries of river systems. A small paragraph in the upper right quadrant contains information about the markings on the map. A table at the bottom of this map lists Rivers and Principle Lakes. Surrounded by Colton's typical spiral motif border. Dated and copyrighted to J. H. Colton, 1855. Published from Colton's 172 William Street Office in New York City. Issued as page no. V in volume 2 of Colton's 1856 Atlas of the World.

Very good. Blank on verso. Even overall toning. Some spotting at places.