1863 Mitchell Map of Ohio and Indiana 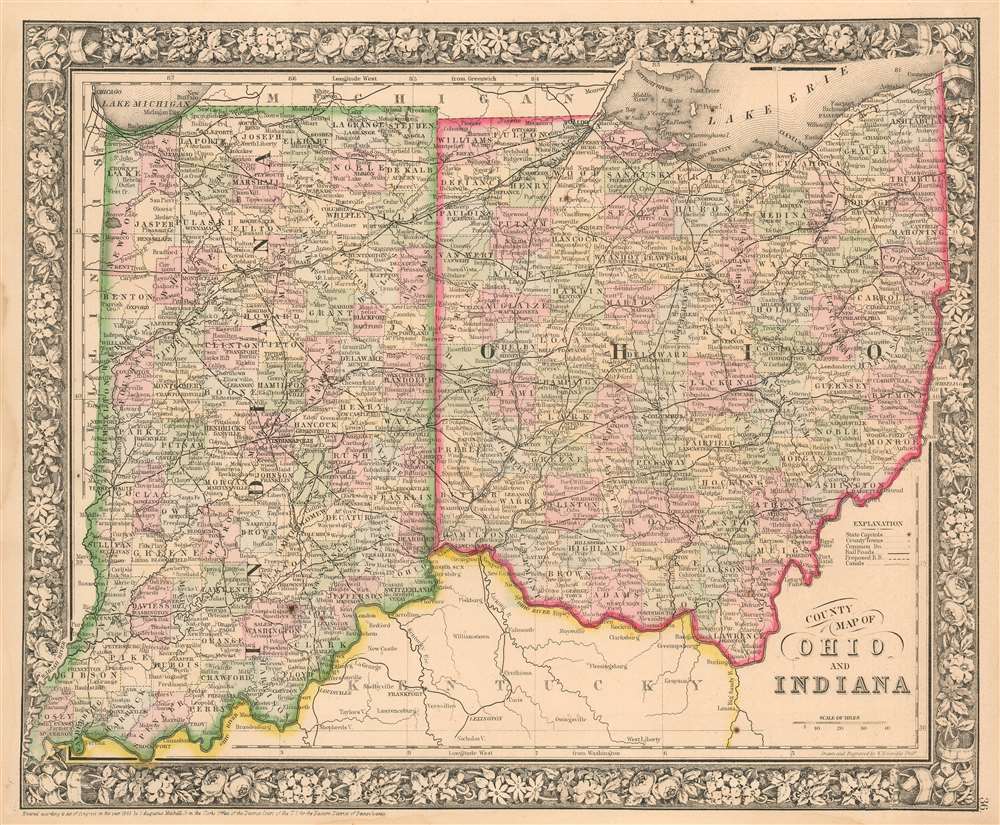 1863 Mitchell Map of Ohio and Indiana

Extending the Reach of the Great Lakes into the Midwest.
$100.00

This is an 1863 Samuel Augustus Mitchell, Jr. map of Ohio and Indiana. The map depicts the region from Illinois to Pennsylvania and Virginia and from Lake Michigan, the State of Michigan, and Lake Erie to Kentucky and Virginia.

Perhaps the most important aspect of this map is the illustration of the Wabash and Erie Canal. The canal connected the Great Lakes to the Ohio River, which established a direct waterway from the Great Lakes to the Gulf of Mexico. Although the canal was known as the Wabash and Erie (that label does not appear here), it was actually a combination of four canals: the Miami and Erie Canal from Toledo, Ohio to Junction Ohio; the original Wabash and Erie Canal from Junction, Ohio to Terre Haute, Indiana; the Cross Cut Canal from Terre Haute, Indiana to Worthington, Indiana; and the Central Canal from Worthington, Indiana to Evansville, Indiana. At over 460 miles long, the Wabash and Erie Canal was the longest canal constructed in North America. The Miami and Erie Canal, which also connected Lake Erie and the Ohio River, cut south across the state from Defiance, Ohio to Cincinnati, Ohio. The canals were hard pressed to compete with the newly - expanding (and much faster) railroads. Despite this competition, the canals survived until the early 1900s and then ceased operations due to decline in use and high operating costs.

Individual counties are illustrated, labeled, and shaded different colors to allow for easy differentiation in both Indiana and Ohio. Cities, such as Toledo, Cleveland, Cincinnati, Columbus, Indianapolis, Terre Haute, and Evansville are labeled, along with myriad other towns and villages. Rivers, creeks, and lakes are illustrated as well, though not all are labeled.

This map was prepared by S. A. Mitchell Jr. for inclusion in the 1863 edition of Mitchell's New General Atlas. The work was successful and examples of the map appear on the market, although separate examples of the map are scarce in institutional collections. The atlas is well represented in OCLC.