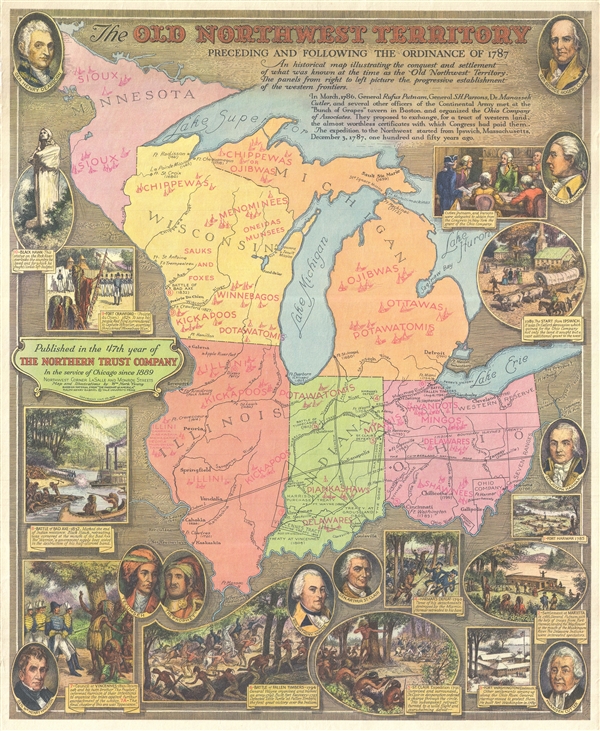 A rare 1936 pictorial map of Illinois by William Mark Young illustrating the land that comprised the old 'Northwest Territory,' essentially those lands northwest of the Ohio River. Centered on Chicago, the map covers from Minnesota and Lake Superior to the confluence of the Ohio and Mississippi Rivers and from the Upper Mississippi Valley to the Ohio-Pennsylvania border. The map graphically celebrates the Ordinance of 1787, which created the Northwest Territory, and was one of the most influential legislative acts of congress ever passed. It established the precedent by which the Federal government would be sovereign over westward expansion with the admission of new states, rather than with the expansion of existing states and their established sovereignty under the Articles of Confederation. Artist William Mark Young illustrates the most important people, events, and milestones in the development of the Northwest Territory in this rich tapestry of a pictorial map. The modern state border have been added and American Indian nations are named throughout.

William Mark Young compiled this map at the behest of the Northern Trust Company to celebrate that organization's 47th year in operation. The Northern Trust contracted Young to illustrate a map/poster for some, but not all, if its anniversaries. This map was printed by Ralph Henry Gabriel of Yale University Press.

William Mark Young (March 18, 1881 – January 1, 1946) was an American etching artist, muralist, and commercial draughtsman active in Chicago during the first half of the 20th century. Young was born in Upper Alton, where he attended Upper Alton High School before moving on to Washington University's school of fine arts in St. Louis. His first business venture was a commercial arts firm in St. Louis. In time he moved to Chicago where his most substantial work was produced. Young is known for commercial art etching and painting, advertising, murals, and illustrations. His most impressive works were the murals issued for the Ohio Exhibit at the 1933 Chicago 'Century of Progress' World's Fair. These murals were subsequently relocated to the Ohio State Capital Building. In addition, young illustrated children's books, including a 1939 edition of Dickens' A Christmas Carol, and several books for Whitman Publishing Company in the Big Little Books and Better Little Books series. Young died on New Year's day, 1946. Learn More...


Ralph Henry Gabriel (1890 – 1987) was an American academic, historian, publisher, and editor. He taught history at Yale University for forty-three years (1915-1958) and served as chairman of the History Department (1931-1934). Gabriel also taught at the United States School of Military Government (1943-1946) and was active in the American Historical Association. He was the general editor of the Pageant of America series and the Library of Congress Series in American Civilization. Learn More...