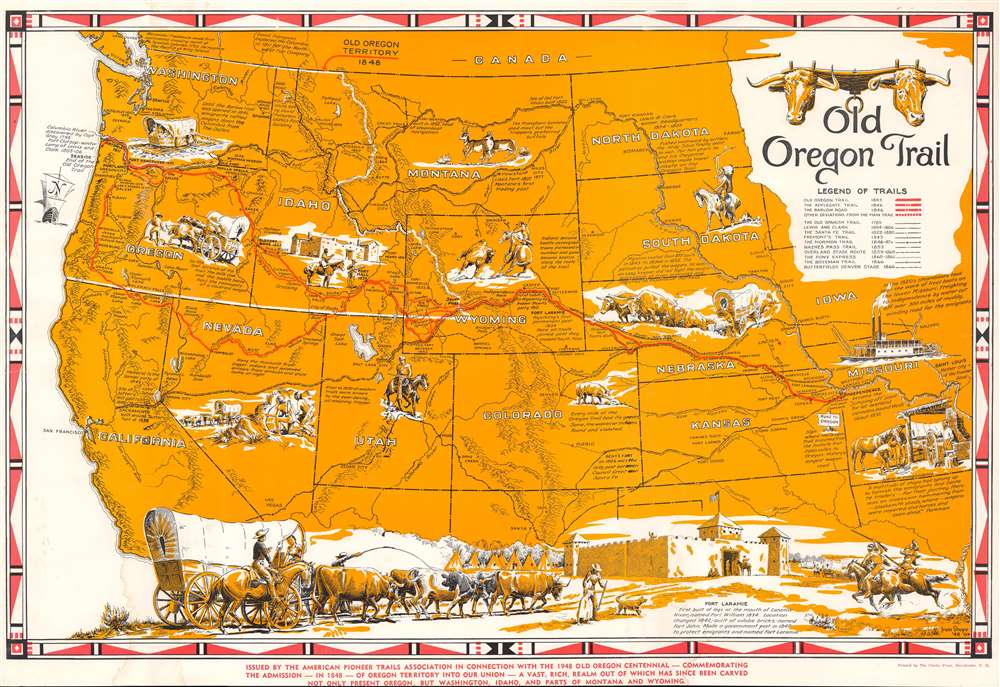 This is a 1948 Irvin Shope pictorial map of the western United States celebrating the Oregon Trail. Coverage embraces the western United States from roughly the confluence of the Missouri and Mississippi Rivers to the Pacific seaboard. The Oregon Trail, covering some 2,170 miles, was an important artery of trade and westward expansion in the mid to late 19th century - used by more than 400,000 settlers, farmers, miners, ranchers, and business owners and their families.

A thick red line highlights the Oregon Trail, and offshoots, such as the California Trail, are emphasized with dashed lines. Important waypoints are labeled, including Chimney Rock in Nebraska and South Pass in Wyoming. Other highlighted trails include the Santa Fe Trail, the Overland Stage Route, Lewis and Clark's route to the Pacific, and the celebrated Pony Express Route. Pictorial vignettes illustrate different aspects of the journey west. Covered wagons pulled by teams of oxen, Native Americans hunting bison and stalking settlers, and even a wagon floating across a river decorate the map. A stunning illustration of Fort Laramie and a covered wagon occupy the bottom portion of the map and truly encapsulate the popular stereotype of life in the Old West. Short captions offer historical facts about westward expansion. These note the importance of frontier forts, such as Bent's Fort, and significant moments in westward exploration.

This map was created and published by Irvin Shope in 1948. There are at least two editions, one issued by Shope himself, and a second, as here, licensed by the American Pioneer Trails Associate and printed in 1948 by the Clarke Press of Manchester, New Hampshire. It is well represented in institutional collections but is scarce on the private market.