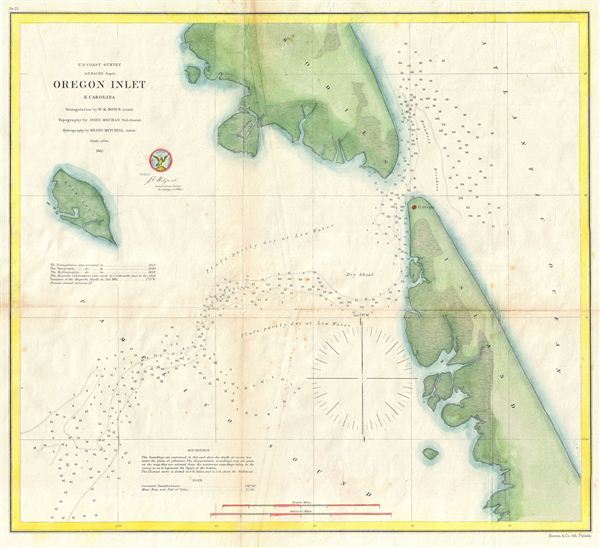 A fine example of the U.S. Coast survey map of Oregon Inlet, N. Carolina. The map covers the inlet as well as parts of Bodie Island, Pea Island, and Duck Island. This inlet, located on North Carolina's Outer Banks, provides access to the Pamlico Sound from the Atlantic Ocean. Apparently a hurricane in 1846 separated the islands. A ship name the Oregon rode out the storm on Pamlico Sound and was the first to report the new inlet, thus immortalizing itself in the region's geography. When this map was made, the southern island, today's Pea Island, was as yet unnamed and so both islands are here identified as 'Bodie Island.' Studying this pass on Google earth will reveal a remarkable change in the regional topography as over 100 years of storm has moved the inlet southwards over 2 miles since its original formation. Today Oregon Inlet is spanned by the Herbert C. Bonner Bridge and North Carolina Route 12. This map offers numerous depth soundings as well as notes on soundings and tides. The triangulation for this chart was completed by W. M Boyce. The topography is the work of John Mechan. The hydrography was accomplished by Henry Mitchell. Issued under the supervision of A. D. Bache for the 1862 edition of e U.S. Coast Survey Superintendent's Report.

Very good. Some wear and discoloration on original fold lines. Backed on archival tissue for stability.
Looking for a high-resolution scan of this?