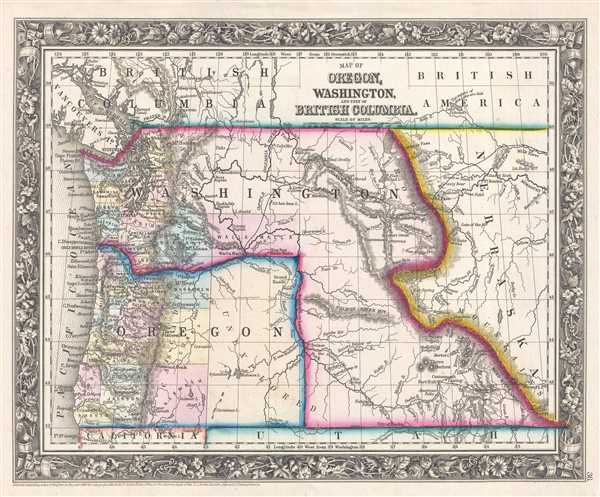 Illustrates the Washington Territory at its largest, from the Pacific Ocean to Wyoming.

Three important transportation routes in the history of the western United States are illustrated here. The first is the Oregon Trail, which, though not shown in its entirety, played a critical role in the settlement of the West. Fort Bonneville, Fort Hall, Fort Boise, and other waypoints along the trail are labeled, and the trail is illustrated from South Pass (located in the bottom right corner of the map) to Walla Walla, Washington. It is labeled as the 'Emigrant Route from the States'. Also illustrated beginning at South Pass, the California Trail snakes its way along the bottom border. Labeled as the 'Emigrant Waggon Road to California', between 1848 and 1869 over a quarter of a million people traveled along the route not only to California, but along spur trails to myriad other locations in the West.

The third transportation route illustrated here is the route Governor Isaac Stevens proposed for the transcontinental railroad. Although only the western portion of the proposed route is illustrated, but not labeled, this important rail route surveyed by Stevens eventually became the route of the Northern Pacific Railroad. Starting from St. Paul, Minnesota, Stevens surveyed and proposed a route that roughly following the 47th and 49th parallels westward and terminated at Puget Sound. He boasted that the harsh winter conditions of the northern territories would 'not present the slightest impediment to the passage of railroad trains.' To this the expedition's naturalist George Stuckley responded, 'A road might be built over the tops of the Himalayan mountains – but no reasonable man would undertake it.' Though the Stevens route appears on many early maps, it was not seriously entertained by any rational party other than Stevens himself. Following Stevens' death in 1862 during the Civil War Battle of Chantilly, the campaign for a far northern route lost its only champion and consequently its momentum. Nonetheless, the northern Pacific route was eventually completed, and Ulysses S. Grant drove the 'Golden Spike' in western Montana on Septemer 8, 1883.

Numerous details are included in the western portion of both the Washington Territory and Oregon. Individual counties are illustrated, labeled, and shaded different colors to allow for easy differentiation. Numerous towns and villages are labeled, including Olympia, Seattle, and Portland. Rivers snake their way throughout most of the map, while the Ricky Mountains cut a distinctive line down the eastern quarter of the map, creating the Washington Territory's eastern border. The whole is surrounded by the attractive floral border common to Mitchell atlases between 1860 and 1865.