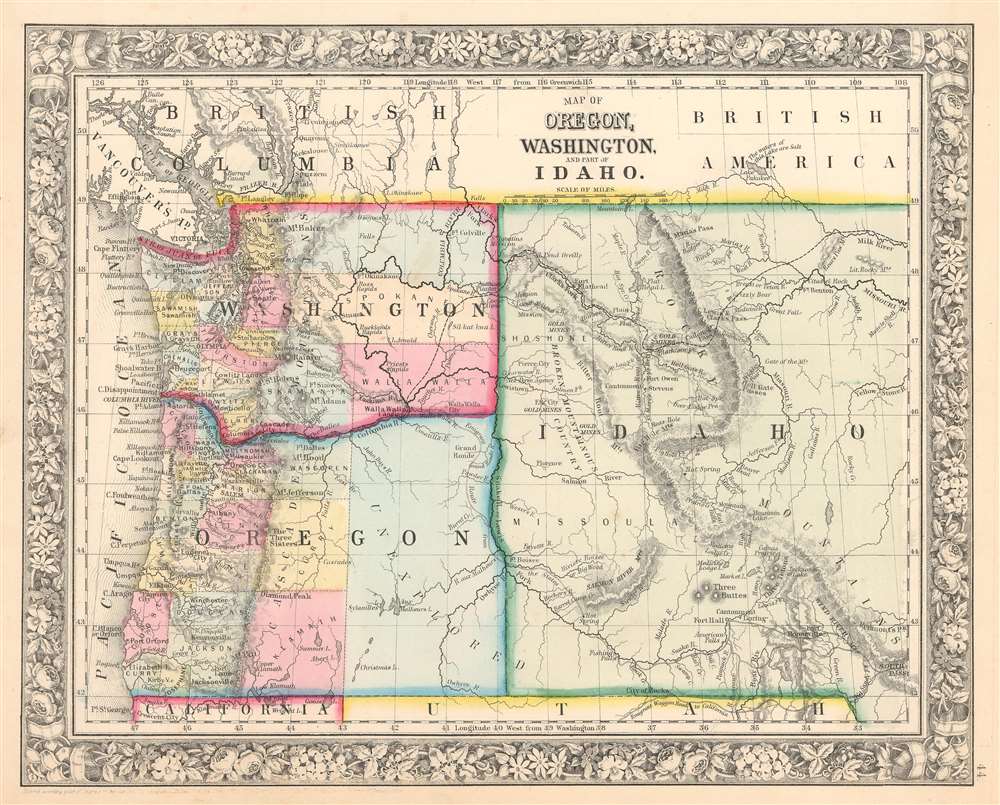 Illustrates part of the Idaho Territory at its largest - geography that only lasted for one year.

This is an 1863 Samuel Augustus Mitchell, Jr. map of the Pacific Northwest in one of its most ephemeral configurations. Depicting the region from the Pacific Ocean to South Pass and from Canada to California and Utah, this map illustrates part of the newly-formed Idaho Territory when it was at its largest. The Oregon Trail winds its way from South Pass northwest roughly along the Snake River to Walla Walla, Washington. Cities, towns, and other settlements are labeled throughout the region, including Olympia and Seattle, Washington, Salem, Oregon, and Lewiston, Idaho (then the territorial capital). Fort Boise is identified as well and would become the territorial capital three years after this map was published by a one-vote margin.

Counties are labeled and shaded various colors in Washington and Oregon, with the western third of Oregon labeled simply as 'unexplored'. No county divisions are illustrated in Idaho, but the Missouri and Yellowstone Rivers are labeled, as are numerous smaller rivers. The Rocky Mountains cut diagonally through Idaho and the territory west of the mountains is labeled simply as 'broken mountainous country'.

The Idaho Territory was created by an Act of Congress on March 3, 1863. At its largest (part of which is depicted here) the Territory stretched from the Continental Divide to the borders of Washington and Oregon, encompassing all of modern-day Idaho and Montana, and nearly all of modern-day Wyoming. Its northern border was the newly-agreed upon 49th parallel between the United States and Canada (then a British possession) and the northern border of Utah. This configuration of the Idaho Territory lasted for only a year because the Montana Territory was formed in 1864 and further land was ceded to the Dakota Territory that year as well. The Idaho Territory lost yet more land when the Wyoming Territory was formed in 1868. Idaho would not receive statehood until 1890.