1753 Vaugondy Map of the Eastern Guyenne Region of France 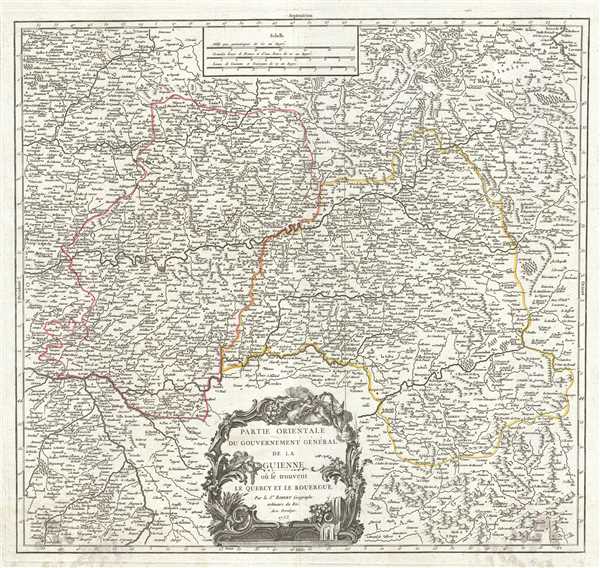 1753 Vaugondy Map of the Eastern Guyenne Region of France

Covers the wine and cheese producing regions in southern France.
$300.00

This is a scarce 1753 map of the Eastern Guyenne region of France by Robert de Vaugondy. It depicts the southern portion of France from Samatan east to Bruide and south as far as Toulouse and covers the whole or parts of the departments of Dordogne, Tarn-et-Garonne, Lot, Aveyron, Cantal and Herault. The map renders the entire region in extraordinary detail offering both topographical and political information with forests and mountains beautifully rendered in profile. The important cities of Toulouse, Cahors, Castres, Entraignes, Brioude and Montauban are identified.

This area is also an important stopping point on the historic Chemin du St. Jacques, or the mediaeval pilgrimage route to Santiago de Compostella. The region of Lot is known for its agriculture, distilled spirits, wines, and fine hunting. Its capital is Cahors and the wines here are rich reds excellent with duck. Dordogne is best known for its production of Monbazillac, a sweet white wine, and Cabecou, a soft goat cheese. Tarn et Garonne is centered around the city of Moissac, which is known for its fine desert grapes. This area produces a number of quality wines, such as AOC Fronton, Cotes de Brulhois, and the Vins de Pays des Coteaux et Terrasses de Montauban.

Tarn-et-Garonne is also home to the area of Coteaux du Quercy, which has a reputation for producing supple and full-bodied wines. Aveyron, centered on Rodez, is famous for its production of Roquefort, a flavorful ewe's milk blue cheese. This region is also known for the legendary Bete du Gevaudan, a terrible man-wolf who terrorizes the countryside. The Chemin St. Jacques also passes through the northern part of this department. Herault, France. This area is home to a wide variety of vineyards and is part of the larger Languedoc wine-growing region, the oldest in France. The red wines produced here are meaty, tannic wines with a deep red color. The area is also known for its production of Pelardon cheese, made from goat's milk, and Perail, an ewe's milk cheese. Cantal, a firm cheese is named after the region of Cantal, where it is produced.

Rumsey 3353.043. Pedley, Mary Sponberg Belle et Utile: The Work of the Robert de Vaugondy Family of Mapmakers, 148.
Looking for a high-resolution scan of this?