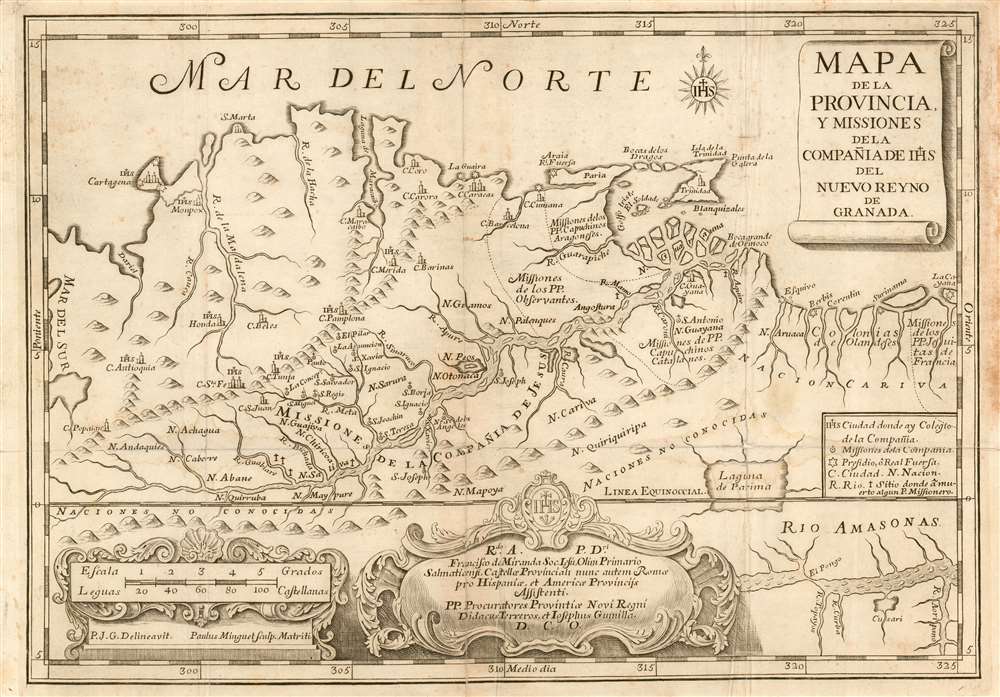 A Detailed and Richly Engraved Map of Jesuit Missions in 18th Century Venezuela
$2,500.00

This is an elegantly-engraved and scarce 1741 Jesuit map of Venezuela and Colombia, produced by a longtime Jesuit missionary active in the region. The author, Joseph Gumilla, had been born in Spain but spent most of his life in the Orinoco river valley in New Granada, which is now modern-day Columbia and parts of Venezuela.

The region covered encompasses South America north of the equator: from Cartagena and Antioquia in Colombia in the west, to Cayenne in the east. Barring a portion of the Amazon appearing to the bottom of the map, all detail disappears south of the equator and in general, the regions south of the immediate vicinity of the Orinoco are labeled Naciones no conocidas (Unknown nations). Lake Parima, long sought as the location of El Dorado, is shown - but with no hoped-for city of gold. The coastline is reasonably well-depicted, showing the Laguna de Maracaibo, the complicated Orinoco delta, and the island of Trinidad.

Indigenous nations are labeled throughout the map, some very considerable. Almost twenty individual nations are shown. With this as the background, the map is then divided between spheres of influence of European missionary and political power. The coast is marked with royal Presidios - three at Cartagena alone. The region of modern-day Guyana is marked as a Dutch colony; beyond that, the region around Cayenne is dedicated to missions of French Jesuits. Near the center, the lower Orinoco is marked generally with Capuchin and Franciscan missions. The western reaches of the map, well into modern-day Colombia, appear more established: marked with cities, many with Jesuit colleges.

The north shore of the Upper Orinoco, as demonstrated on the map, was the heart of Jesuit missionary activity in the region; indeed, the whole of this area is labeled as such. Fourteen Jesuit missions are shown there, mainly between the Meta River and the Cinaruco River in what is now western Venezuela. Three missions appear south of this region; two others appear further downstream. But further west along the Orinoco, the Jesuits appeared unable to go: there, four crosses mark the places where missionary Fathers died.

The map, necessarily, focuses on fixing the geographical places in which Gumilla lived and worked: thus the political and religious aspects of his work are foregrounded in the map. In the context of Gumilla's history of the region, the map would serve to frame his descriptions of plants, animals, and birds, in addition to the efforts to convert local people.

This map was engraved to accompany Gumilla's natural history of the Orinoco region, El Orinoco Ilustrado in 1741. The book is reasonably well represented in institutional collections. The separate map appears only in the Huntington, the Bibliotheque National, the Biblioteca Nacional de Espana, and the Bayerische Staatsbibliothek. The map is rare on the market: We are aware of only one example appearing at auction in the past decade.

Joseph Gumilla (1686-1750) was a Spanish Jesuit priest who produced a natural history of the Orinoco River Valley of Venezuela and Colombia. Ordained in 1714, he was sent to Venezuela and worked in the region for thirty five years. He variously served as Rector of the School of Cartagena, Provincial Superior of New Granada, and Procurator in Rome from 1738. He wrote his natural history, El Orinoco Ilustrado in Rome at the end of the 1730s and published in Madrid in 1741. He returned to South America in 1743, dying in Los Llanos. Gumilla is credited with having introduced coffee into Venezuela, in 1732. Learn More...