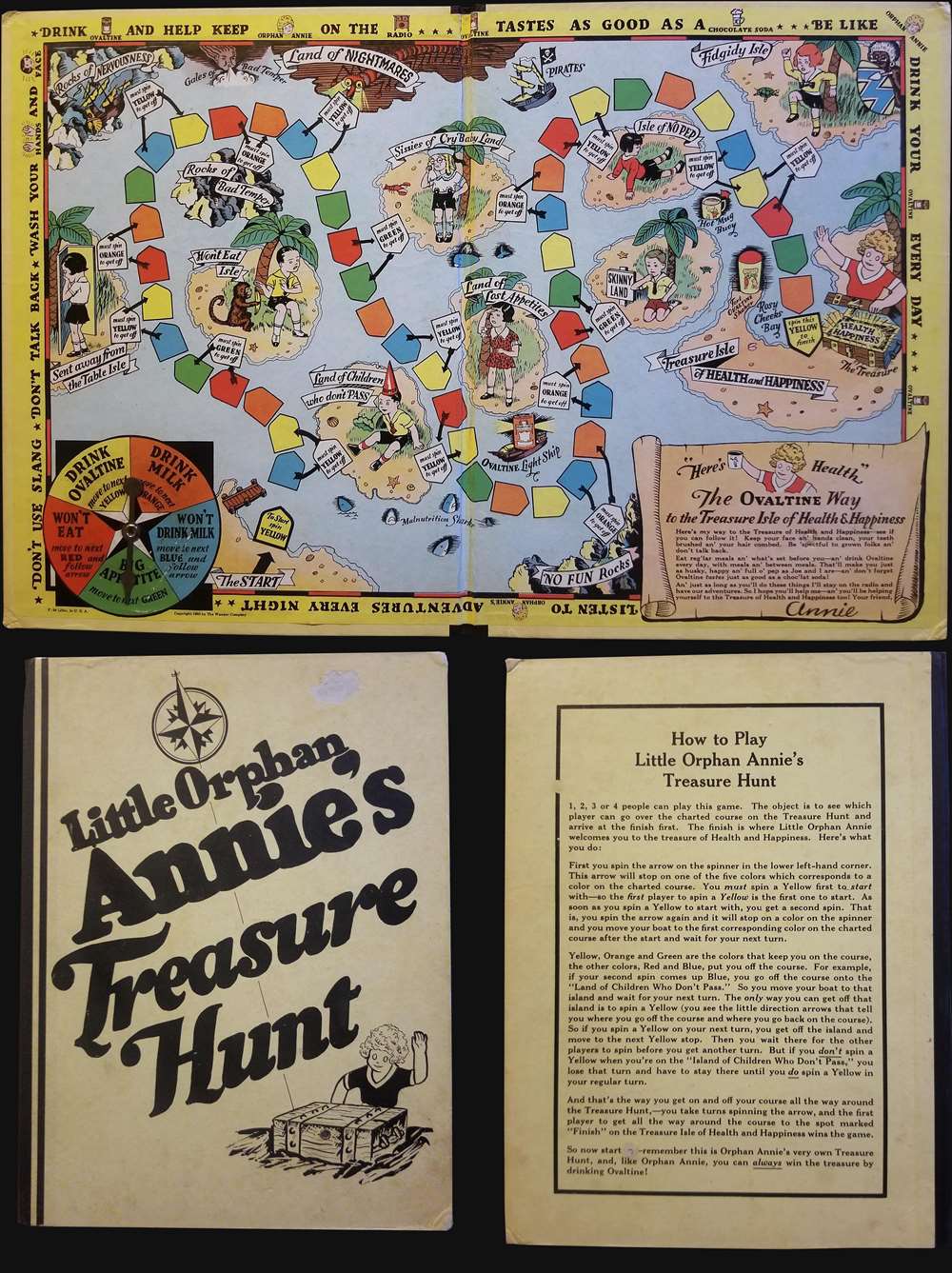 A board game created to promote the Little Orphan Annie radio show.
$225.00

This is a 1933 Wander Company fantasy map board game of a treasure hunt featuring the radio show character Little Orphan Annie. The map traces the 'charted course' from the Start through several childhood obstacles faced by children that misbehave before reaching the Treasure Isle of Health and Happiness, which, of course, if what any child will gain from drinking Ovaltine. As the player sails along the course to the Treasure Isle, they can be waylaid on 'Won't Eat Isle', 'Sent away from the Table Isle', and the 'Land of Lost Appetites'. The 'Land of Nightmares' and the 'Rocks of Nervousness' are also features in this rather dystopic landscape. Another hazard, the 'Sissies of Cry Baby Land' provides an intriguing look into how children were raised in the 1930s, although, in many ways, not much has changed in the intervening years. The whole is surrounded by a border which bears the message, 'Drink Ovaltine and help keep Orphan Annie on the radio - Ovaltine tastes as good as a chocolate soda - Be like Orphan Annie drink your Ovaltine every day - Listen to Orphan Annie's adventures every night - Don’t' use slang - Don’t talk back - Wash your hands and face.'

This board game was created and published by The Wander Company in 1933 most likely as a prize for children that sent in proofs of purchase from Ovaltine packages. The Little Orphan Annie radio show would promote these giveaways, which also included items like mugs and secret decoder rings.

The Wander Company (1917 - 1988), better known as the maker of Ovaltine, was a firm based in Villa Park, Illinois, a suburb of Chicago. The company began operating in Villa Park in 1915 and chose the location because of its proximity to Chicago, access to a good water supply and two railroads, and its rich farmland. The company was founded by George Wander in 1863 in Switzerland, as he began his search for a nutritional food supplement. His son, Albert Wander, continued his father's research until Ovomaltine was discovered in 1904. The drink, comprised of whole milk, fresh eggs, cocoa, and barley malt extract, first found a use in hospitals as a way to get patients to take their vitamins. It was decided around 1915 that production of the product should begin in the United States, but here it became known as Ovaltine. The Wander Company, which later became known as the Ovaltine Company, inserted itself into the life of the community, even going so far as to provide milk and wafers to schoolchildren during the Great Depression. During the late 1930s and into the 1940s, Ovaltine was one of the sponsors for several popular radio programs, including 'Captain Midnight and the Secret Squadron' and 'The Latest Adventures of Little Orphan Annie'. The radio announcers would encourage listeners (i.e. children) to collect proofs of purchase from Ovaltine packages so that they could exchange them for prizes, such as mugs, decoder rings, and board games. A larger post office had to be built in Villa Park to accommodate the deluge of mail created by these promotions. The company operated in Villa Park for decades and was a fixture in the community, until it was purchased by another firm in the late-1980s and moved to Minneapolis, where Nestle still makes Ovaltine to this day. Learn More...

Very good. Wear along original center binding. Wear along the edges and at the corners. Some small areas of loss, particularly to the spinner in lower left corner. Printing on verso.