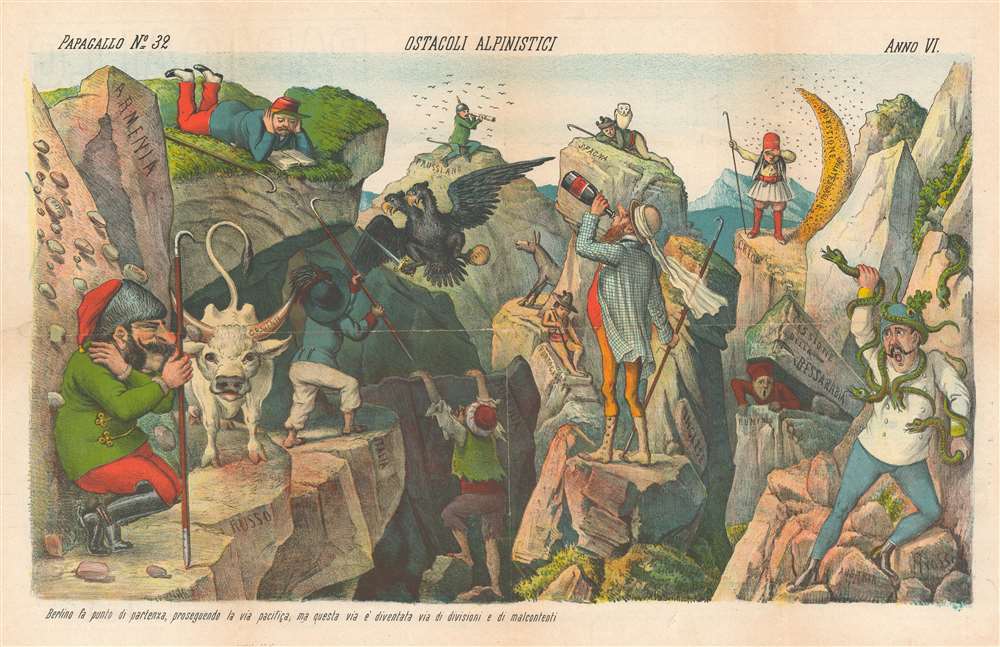 An Italian political cartoon illustrating the complex political situation in Europe following the Treaty of Berlin.
$900.00

Published almost a month after the Treaty of Berlin, this 1878 Augusto Grossi pictorial cartoon depicts the European powers attempting to navigate the treaty's ramifications. Grossi depicts the tense political situation as a hazardous mountain pass, with sheer cliffs, precipices, and towers of rock creating obstacles on the road to harmonious international diplomacy. The caption reads, 'Berlino fa punto di partenza, proseguendo la via pacifica, ma questa via e diventata via di divisioni e di malcontenti (Berlin makes a starting point, continuing the peaceful way, but this way has become a way of divisions and discontent)'.

The European powers are illustrated as people, many of which are facing terrible peril. Turkey, then known as the Ottoman Empire and referred to as the 'sick man of Europe', had recently lost the Russo-Turkish War of 1877-78 which forced the Congress of Berlin and the signing of the Treaty of Berlin, and is illustrated here trying to pull itself up onto a ledge with barely a foothold. Italy is fighting off advances from the double-headed eagle of Austria-Hungary. Austria also appears on the lower right being attacked by snakes, each of which represents a different part of the Balkans, a region over which they want to solidify their control. Balkan Slavs are fighting for independence and pan-Slavism, a movement without a defined leader. Romania is emerging as an independent power, after the forced cession of Bessarabia to Russia. Greece is standing on a cliff covering its eyes and hoping not to be attacked by bees, representative of the 'Thessaly Question.' This was a rebellion in Thessay, Epirus, and Macedonia that attempted to throw off Ottoman control and reattach to Greece. England enjoys the spoils of Cyprus, while Spain sleeps through the conflict, and Armenia tries to ignore it all. Prussia, indicative of Germany, watches from its isolated peak in the background, seeing all but doing nothing. Russia, in the foreground, sleeps, waiting for its time to fight to regain lost territory.

This cartoon was published by Augusto Grossi in the Sunday, August 11, 1878 edition of Il Papagallo. Only one example is catalogued in the OCLC and it is part of the collection at the Library of Congress.

Good. Backed on archival tissue for stability. Areas of infill. Text on verso.