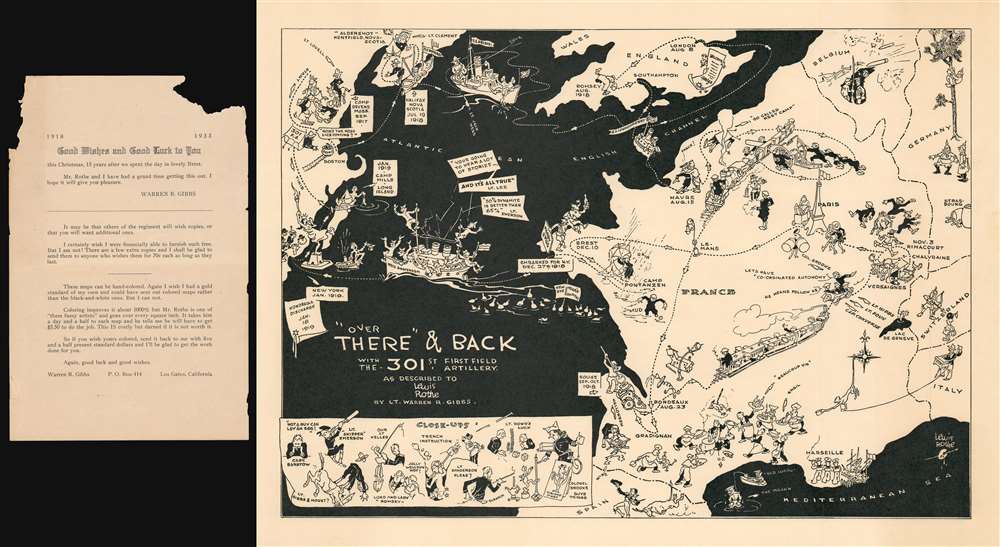 This is an extremely rare 1933 Lewis Rothe and Warren Gibbs pictorial map of Europe playfully commemorating the peregrinations of the 301st Field Artillery during World War I. The map traces the movements of the 301st from Boston through Nova Scotia and England to France and then back across the Atlantic to New York City after the end of the war. Created in conjunction by Lewis Rothe, the artist, and Warren R. Gibbs, a veteran of the 301st, commentary, hilarious vignettes, and in some cases a surprising level of detail, are present throughout. A series of 'close-ups' are included in the lower left, which are caricatures of some of the men in the unit that highlight, among others, Lieutenant Dowd's luck at gambling, and Colonel Brooke's habit of buying souvenirs.

The Travels of the 301st

The journey begins at Camp Devens in Massachusetts, with the 301st leaving the United States in July 1918 and heading to Nova Scotia before crossing the Atlantic to England, and finally the English Channel to France, all while following at dotted line with arrows pointing the way. The three of ships upon which they traveled are illustrated and named, with two of the crossings highlighted by seasick men. It appears that before the unit left England they played a game of baseball. Once in France, arriving on August 15 at Le Havre, the unit winds its way around France on foot and by train. Artillery pieces, trains, doughboys in uniform, waiters at French restaurants, and the Eiffel Tower are among the illustrations, with no sign of combat. A doughboy carries a bearded Santa Claus on his shoulder to mark Christmas 1918, two days before the unit leaves Europe to return to the United States.

This map was drawn by Lewis Rothe and published by Warren Rockwood Gibbs in 1933 to celebrate the fifteenth anniversary of the end of the war. We are aware of only two other examples, which are part of the institutional collections at the Wisconsin Veterans Museum Research Center and the Waltham Public Library in Waltham, Massachusetts.

Lewis Rothe (July 6, 1874 - November 28, 1951) was an American artist, illustrator, and painter. Born in Massachusetts, Roth spent most of his adult life in California, residing in San Francisco, San Diego, and Oakland. He married Enid Miller in 1939, with whom he had a son and a daughter and was a stepfather to Enid's two children from a previous marriage. Learn More...


Warren Rockwood Gibbs (June 17, 1878 - May 3, 1941) was an American manufacturer and farmer. Born in Burlington, Vermont, Gibbs attended Cornell University and graduated in 1900. He served with the Supply Company of the 301st Field Artillery during World War I. After the war, Gibbs returned to Richmond, Massachusetts, where he and his wife rand Rock Ridge Farm for an unknown number of years moving to California, where he died at Berkeley. He married his wife Rebecca McClure Whitehead on October 18, 1906 in Pittsfield, Massachusetts, whom he may have divorced, as it appears he was married to Irene Gibbs in 1940, and Rebecca's death is recorded as June 13, 1947 in Richmond, Massachusetts. Learn More...