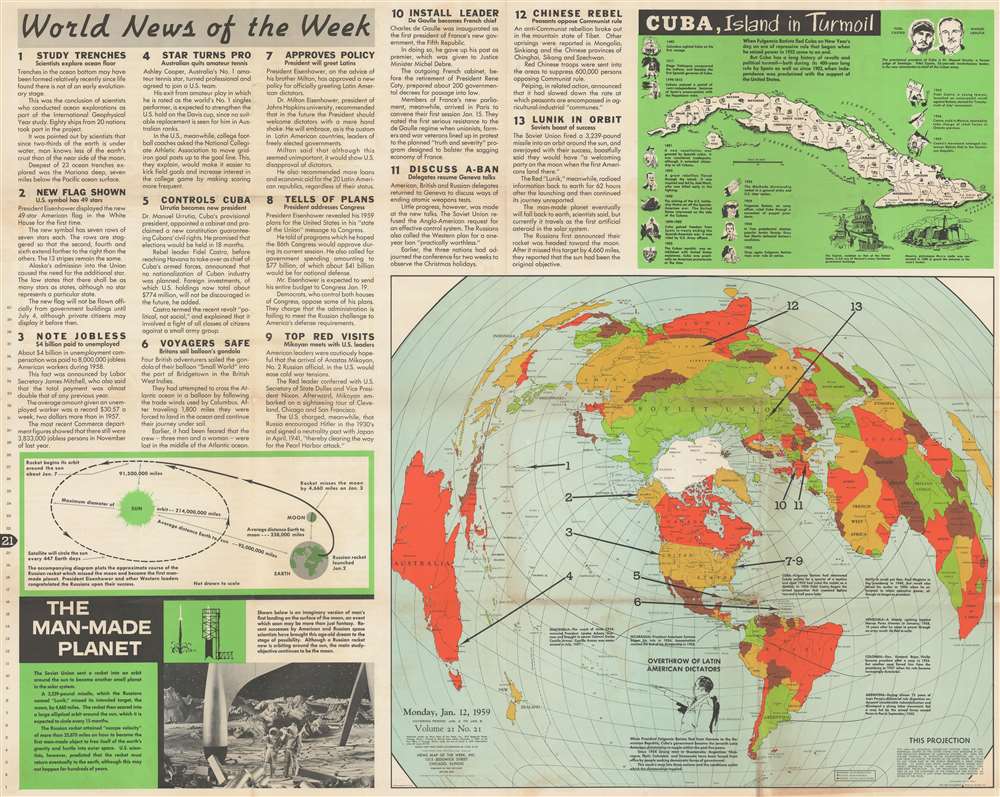 Highlights the seven Latin American dictators that had been overthrown in the late 1950s and the Soviet rocket that was orbiting the Sun.

This is a 1959 Hubert A. Bauer and News Map of the Week, Inc. map of the world chronicling the toppling of Latin American dictators from 1954 through 1959. A portrait of Fulgencio Batista, the ousted dictator of Cuba, occupies the southern Pacific Ocean and introduces the map's purpose - to detail the rise and fall of seven Latin American dictators from Cuba to Argentina. The other arrows, each numbered one through thirteen, indicate where the thirteen news stories summarized occurred. These include a landmark study of deep ocean trenches, the appointment of a cabinet in Cuba, a new U.S. national flag with a 49th star, a visit by the No. 2 Russian official Anastas Mikoyan to the United States, and a rebellion in Tibet. An inset, entitled 'Cuba, Island in Turmoil' provides a history of Cuba in thirteen vignettes. Profile views of the Cuban capital and Morro Castle are included as well. Bauer employs the azimuthal projection, developed by American Airlines. The projection allows the rendering great circle routes as straight lines.

As was stated by headline thirteen above, the Soviet Union launched the first man-made rocket into space during this week in history. Two graphics in the lower left corner further explain this event. The first illustrates how the rocket, which was supposed to orbit the moon but missed by 4,660 miles, was launched on January 2nd and settled into an orbit around the Sun, making it the first 'man-made planet'. The box in the lower left corner further educates the viewer on 'Lunik' and states that it was the first man-made object to reach escape velocity, meaning that it was able to leave Earth's gravitational pull. A very 'science-fiction' drawing of two men and a rocket on the Moon accompanies this short explanation, reinforcing everyone's goal for the Space Race.

This map was created by Hubert A. Bauer and the whole broadside was created and published by News Map of the Week, Inc. in 1957. This is the only known surviving example.

Hubert Anton Bauer (1882 – 19xx) was a German-American geographer and cartographer. Born in Germany, Bauer served in the German Merchant Marine for ten years, during which time he made nine trips around Cape Horn between 1905 and 1909. He then served in the German Navy for another four years. He came to the United States to earn his Ph.D., which he received from the University of Washington. After receiving his degree, he taught Earth Sciences at the University of Washington for a few years before accepting a position as a research supervisor to the Oregon State Planning Board, where cartography was one of his principal tasks. Then, he was selected as a consultant to the Alaska Planning Council and worked with the National Resources Planning Board in the Alaska Territory for four years, engaging in field work, research, and mapping. He worked for the Civil Aeronautics Administration during World War II and wrote and edited a series of aeronautical textbooks for Macmillan. His biography in his work Cartography (Map Making) summarizes his cartographic work quite nicely

Dr. Bauer is the author of numerous scientific articles on geographic topics, and of three books, one of them a brief treatise on cartography. Besides editing wall maps and charts for private map companies, he spent several years in independent cartographic work on numerous educational maps. Among his map products are modern air-age maps for the Air-Age Education Research, New York, a series of new map designs for the New Map of the Week, Inc., in Chicago, and a series of atlas maps for the revised J. Russell Smith geographies. He also prepared and edited for the Denoyer-Geppert Company, of Chicago, a series of four Meteorology Wall Charts which have become very popular with our air-minded school population.

Bauer was a professor at Villanova University from at least 1950 until at least 1957. Learn More...

News Map of the Week Inc (c. 1940 - c. 1973) was a company based in Chicago, Illinois that published weekly educational broadsides that were distributed by subscription to elementary and high schools across the United States. The broadsides consisted of a world map on the top half and short summaries of the past week's headlines on the bottom half. Sometimes historical content other than material relating to the past week's news was included. Learn More...