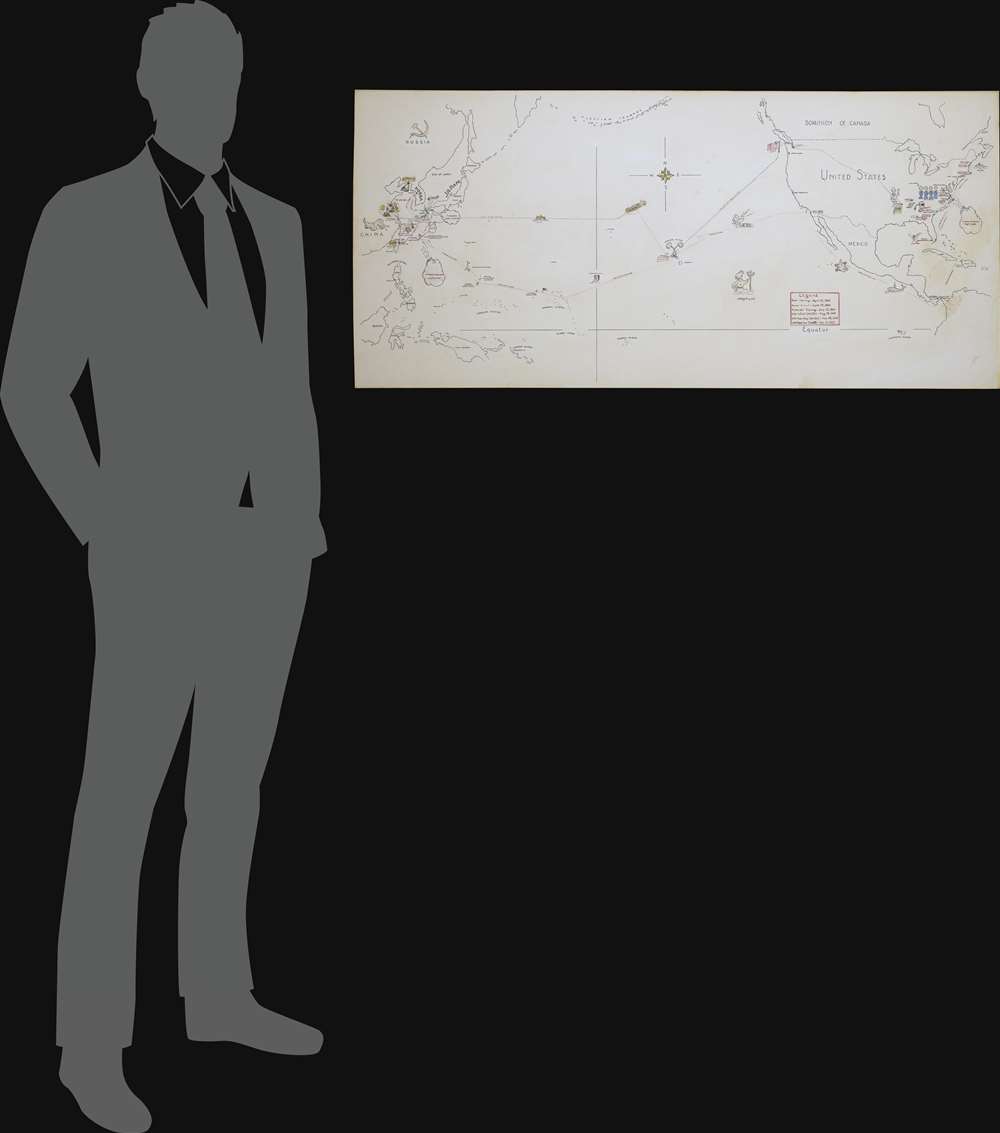 A remarkable survival, this is a c. 1947 manuscript pictorial route map of the Pacific War following the World War II service of a U.S. Navy man. Pictorial vignettes highlight the sailor's wartime experience: swearing in, working at the Charleston Navy Yard, surveying the Pacific, weathering typhoons, mine sweeping, good times in Shanghai, and the voyage home. Dated lines trace his travels, with red dates marking wartime movements and yellow dates identifying his return.

Hailing from Nashville, Tennessee (where he was drafted on April 17, 1944), this sailor was sworn in at Memphis on April 19, 1944. He shipped out to bootcamp near Williamsburg, Virginia, via Cincinnati, Ohio, where he arrived on April 21, 1944. Then, he was assigned to Radar School (June 27, 1944) and Minecraft Training (July 12, 1944), before becoming part of the crew of the U.S.S. Inflict (AM 251) on August 28, 1944, the day the Inflict was commissioned. Inflict and her crew spent the next few months on the Atlantic Seaboard, going on a shakedown cruise, minesweeping exercises, and participating in antisubmarine warfare exercises off the coast of Maine in late October and early November 1944. Inflict arrived in Miami, Florida, on December 1, 1944, and served as a training school ship until March 9, 1945, when she left for a tune up before embarking for the Pacific. She left for the west coast via the Panama Canal on April 14, 1945 and arrived in San Diego in on May 6, 1945.

The Inflict left for Hawaii two days later, arriving at Pearl Harbor on May 17, 1945. She left Pearl Harbor on May 22 for Eniwetok in the Marshall Islands and then proceeded to Guam and Saipan. Inflict led a convoy bound for Okinawa from Saipan beginning on June 15, 1945. The ship operated out of Okinawa after the island was declared secure on June 21. From Okinawa, the Inflict commenced mine sweeping operations in the South China Sea during July 1945 and cut her first mine on July 7 - illustrated here by an individual with a dustpan and broom sweeping up a mine. She then swept mines near Kyushu from August 13 to August 23, 1945 and prepared for occupation duty. Inflict left for Korea, Formosa, and Japan, on August 30, 1945, referenced here by a gigantic bell proclaiming 'Liberation' for Korea and a sinking maru off Kyushu.

According to the map, Inflict went to Taiwan from Kyushu in mid-November, where on November 28, 1945 the artist transferred to the U.S.S. Mainstay, the same day he learnt he was being set home. From Taiwan. he went to Shanghai on the Mainstay, where he spent a week enjoying that city's famous postwar 'nightlife'. Finally, he transferred to the U.S.S. Basilan, a barracks-stores-water distillation ship, for the voyage home. The Basilan left Shanghai on December 9 (per the map) and arrived in Hawaii on Christmas Day. Apparently, the Basilan encountered mines along the way and the artist contracted dysentery. The Basilone left Hawaii on December 27 and arrived in Seattle on January 5, 1946. The artist left Seattle on January 9 for Memphis, where he was discharged on January 16, 1946.

Maps tracing a unit's movements during World War II were created by American and British units both during and after the war. As a genre, these maps represent a wide range of aesthetics, from the purely functional that label places and provide dates, to the artistic, even comic. Many combine the two and provide a visually striking but historically informative summary of the unit's peregrinations. Most such maps were printed by units in Europe during occupation duty. Many others were included as fold outs in unit history books published after the war. We have encountered very few route maps of the Pacific Theater. Likely, traveling between islands in the vast Pacific was not as compelling as walking or driving across Europe. Moreover, Europe held a cultural significance in the United States that Pacific islands did not. Also, very few of the maps in the genre were created in manuscript. This is thus an exceptional example of the genera shedding a unique light on the Pacific War experience.

Very good. Manuscript. Mounted on art board.
Looking for a high-resolution scan of this?