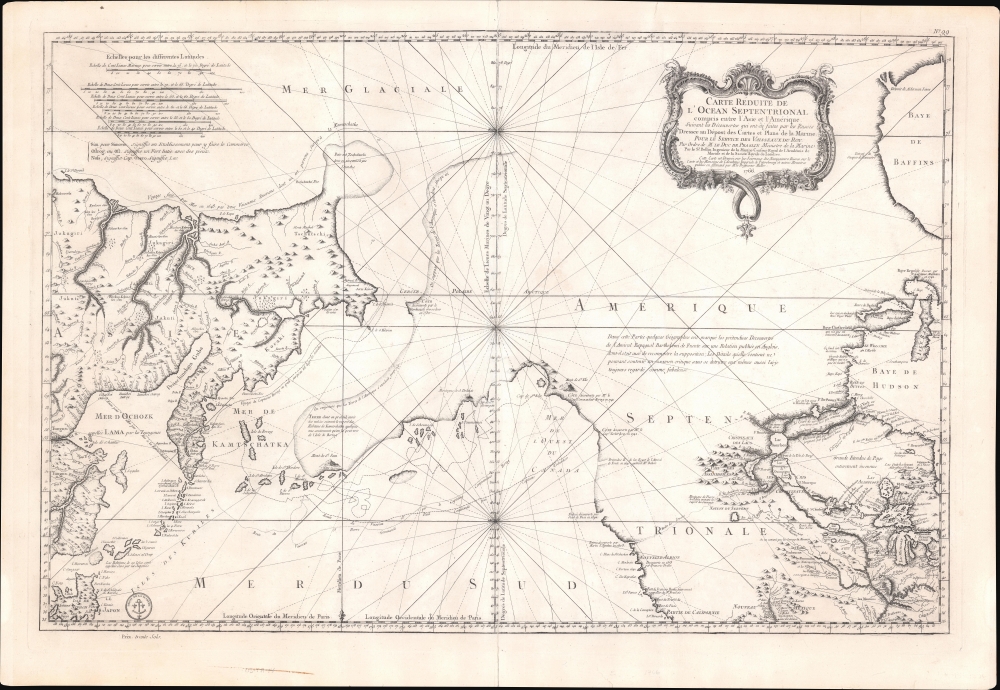 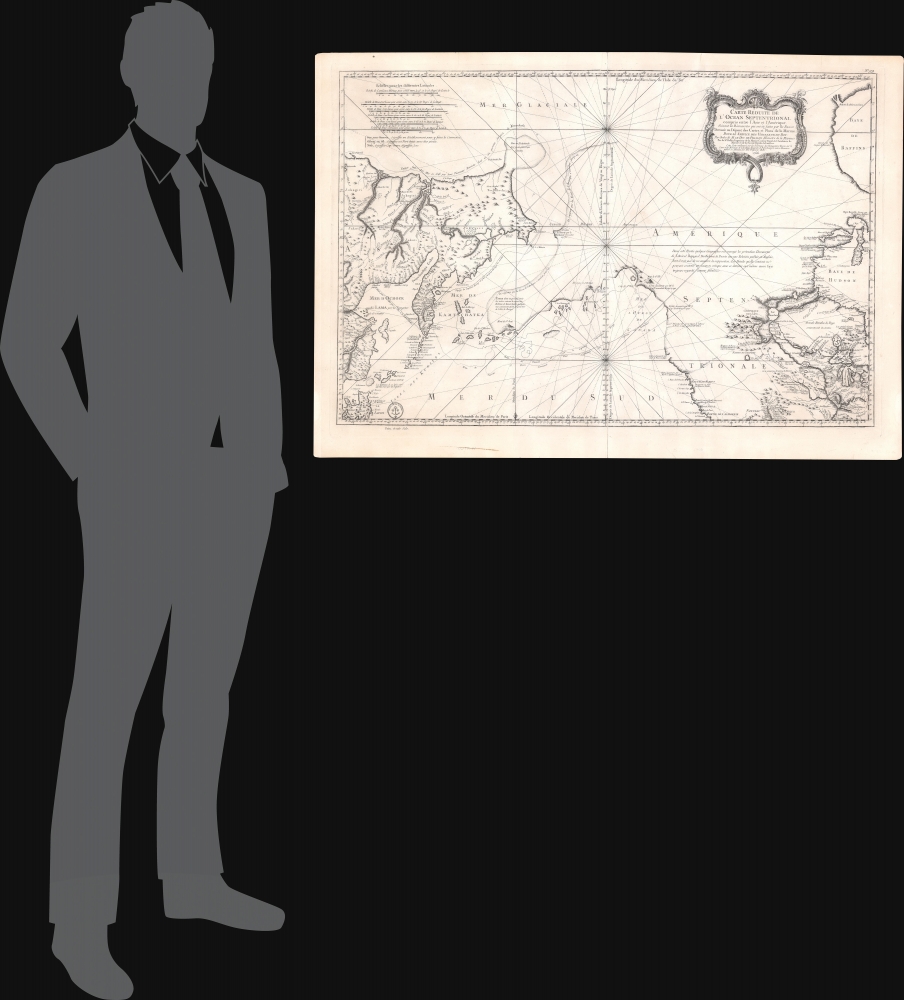 A beautiful example of Bellin's splendidly engraved 1766 map of the Pacific Northwest, Alaska, the Bering Strait and Siberia – the first major French map to embrace Frederick Muller's revolutionary cartography relating to the discoveries of Vitus Bering and Aleksei Chirikov. This map is a smorgasbord of cartographic speculation. It was issued after the seminal explorations of Vitus Bering (1733 - 1743) on the Asia side of his namesake strait, but before the voyages of Captain James Cook mapped the American side of the Bering Strait. Centered on the Bering Strait, the map covers from the Sea of Okhotsk (Ochozk) to the Hudson Bay, and from the high Arctic south as far as New Mexico, and Honshu (Japan).

In the middle part of the 18th century there were few paces on Earth as remote or as little known as the American Northwest and the Siberian Northeast in the vicinity of the modern-day Bering Strait. The first major scientific incursion into this region was the 1733 - 1743 Great Northern Expedition led by Vitus Bering and Aleksei Chirikov. The expedition was widely discussed in European scientific circles, but Bering and Chirikov's actual discoveries were suppressed by the Russian Academy of Sciences until 1747 when Joseph-Nicholas De L'Isle, younger brother of the famous French cartographer Guillaume De L'Isle, who was then working in Russia for the Tzar, fled Russia and published a preliminary interpretation of the Bering-Chirikov discoveries in partnership with Philippe Buache. Buache incorporated some of the unpublished cartographic musings of Guillaume De L'Isle, who was by then deceased, to fill in the then largely unknown northeastern parts of America.

The St. Petersburg Academy of Sciences was understandably offended by the unofficial leak of knowledge from the Great Northern Expedition and sponsored the German cartographer Gerhard Freidrich Muller to issue an official response map to De L'Isle/Buache. That map, which was published in 1754, was the first to contain substantial accurate information with regard to Russian discoveries it the Pacific Northwest and is the basis for much of the cartography seen here, including the Muller's most significant innovation, the so-called Muller Peninsula.

The Muller Peninsula is a large speculative peninsula that bears a vague resemblance to Alaska. It was postulated by Muller based upon his reading of the Bering-Chirikov reports. As shown here on Bellin's map, we can follow the track of the expedition as Bering and Chirikov skirt the Aleutian Islands, sighting land on numerous occasions, before reaching the North American mainland and sighting Mount Saint Elias (Mont de St. Elie). One has no difficulty understanding how, by drawing a line between Bering's sightings of the Aleutian Islands, Muller presumed them connected in the form of a vast Aleutian peninsula. Despite the exaggerated westward proportions of Muller's Peninsula, his mapping, as seen here, is significant in that it

Another feature of extreme interest is the ghosted bulbous peninsula identified as Tschuktschi in northeastern Siberia. Earlier versions of this were known as Witsen’s Peninsula. This oddity appears in various forms on numerous maps dating from the late 17th and early 19th century. It is a legacy of Peter the Great's obsession over the search for a Northeast Passage. Around 1648, the Cossack Semen Ivanovich Dezhnyov (1605 - 1673) put together a rough and ready expedition to explore the region. His company consisted of Fedot Alekseyev, traveling with the merchants Andreev and Afstaf'iev (representing the Guselnikov merchant house), who provided their own ship, and Gerasim Ankudinov, an experienced sea captain with his own ship and some 30 men. Dezhnev, along with Mikhail Stadukhin, recruited some 19 men of their own and procured a traditional kocha ship. Including escort vessels, a total seven ships sailed from the mouth the Kolyma River, along the Siberian Arctic, to the Anadyr River north of Kamchatka, and in doing so became the first Europeans to sail through the Bering Strait some 80 years before Vitus Bering. Dezhnyov described rounding a large mountainous promontory identified as Chukchi, Tschuktschi, or Chukotka Peninsula. Of the seven vessels and multiple leaders, only three ships, including Dezhnev’s, survived the passage.

Dezhnyov ultimately proved that there was indeed a nautical route from Russia to East Asia, but at the same time confirmed that it was exceedingly impractical for trade. Nonetheless, his promontory was subsequently embraced by European cartographers who, lacking serious scientific data from the Dezhnyov expedition, surmised the form. The first of these was Dutchman Nicholaas Witsen, who prepared a map in 1687 based upon Dezhnyov's records that he discovered on a 1665 trip to Moscow – hence the term Witsen’s Peninsula. Many cartographers followed suit, and some even went so far as to suggest that this landmass may actually be connected to America. Dezhnyov's actual reports were rediscovered by Gerhardt Friedrich Muller who published them in 1758 and incorporated them into his own influential map of the Siberian Arctic.

Beyond the discovery of Mount Saint Elias, much of the Pacific Northwest is notably blank. Along the west coast, the map notes the speculative River of the West, supposedly discovered by Martin D' Aguilar in 1603, the factual Strait of Juan de Fuca falsely attributed to Jean de Fuca (1592), and further north the supposed river entrance discovered of De Fonte, to which Bellin clearly gives little credit. All of these are present to suggest that Bellin has not yet given up hope that an inland river route might exist between the Hudson Bay and the Pacific. Nevertheless, between these discoveries and Lake Winnipeg (Ouinipigon) there is little content.

Some of the river systems around Lake Winnipeg have been added and updated considerably over the Muller map based upon the discoveries of French Jesuit missionaries and fur traders active in the early 18th century. Among areas of note are the headwaters of the Missouri (which are not connected to the Missouri), the Lake of the Woods, Fort Maurepas, and an interesting mapping of the Red River connecting it to the Lake of the Woods.

This map was published in the second volume of the 1766 edition of Bellin's Hydrographie Francoise, one of the most important nautical atlases of the 18th century. Because of the rapid redefining of this region in the second half of the 18th century, this map had a short lifespan and, despite its great historical importance, is rarely seen on the market. An essential item for any serious collection focused on the Arctic or the Pacific Northwest. An empty OCLC reference exists for this piece, suggesting that a former cooperative member created the entry before withdrawing from OCLC.

Very good. Even overall toning. A few minor verso repairs and reinforcements along edges and to original centerfold.