1902 Norris Peters Map of Steamship Routes across the Pacific 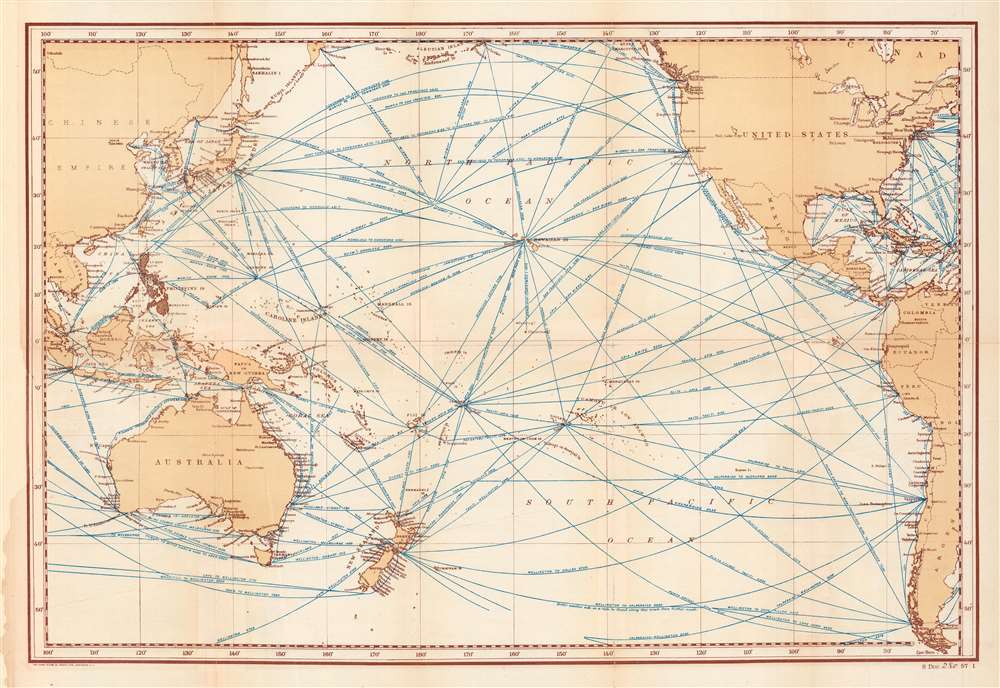 1902 Norris Peters Map of Steamship Routes across the Pacific

This is a scarce 1902 Norris Peters map detailing steamship routes across the Pacific. It was produced when the United States was consolidating its control of the Philippines, Hawaii, Guam, and other Pacific possessions in the wake of the Spanish-American War, a process which the map was designed to facilitate.

This map depicts the Pacific Ocean, as well as portions of the Indian Ocean, Atlantic Ocean, and Caribbean Sea, crisscrossed by lines representing the shortest route between ports by steamship in nautical miles. It is a fascinating record of Trans-Pacific travel and communication at the start of the 20th century.

As the map appeared in a Congressional document about the recently-seized Philippines (see Publication History and Census below), the islands are shaded in black here. Several features jump out quite readily, including the dominance of San Francisco over long-distance shipping on the western coast of the U.S., the importance of Panama even before the completion of the canal in 1914 (the Panama Railroad was already in operation for nearly fifty years by this point), and the role played by 'nodes,' ports and coaling stations, in the Trans-Pacific steamship network. Some of these are well-known ports like Honolulu and Yokohama, while others, such as Apia and Punta Arenas, are hardly household names.

The Spanish-American War and Its Legacy

The Spanish-American War was fought between Spain and the United States between April 21, 1898, and August 13, 1898. The war started after the USS Maine suffered a massive explosion and sank in Havana Harbor. Tensions had been rising between the two countries for some time, with the U.S. showing support for Cuban independence while Spain claimed Cuba as a province. The Spanish were quickly outclassed and outnumbered by the U.S. forces and surrendered after minimal conflict. After the fighting ended, the U.S. received the Philippines, Guam, Puerto Rico, and Cuba as U.S. protectorates.

During the war, Hawaii, which had been functioning as a republic dominated by American-descended white elites for four years, was annexed by the U.S. Also at the turn of the 20th century, the U.S. competed with other major powers to claim islands and island chains in the Pacific, including Midway Atoll and a portion of the Samoan Islands that became American Samoa. Although a large segment of the U.S. public was deeply ambivalent about such blatant imperialism, concerns about hostile foreign powers taking control of the Pacific won out and the U.S. became a Pacific imperial power, which it has remained ever since. This map would have been useful in orientating lawmakers and their staffs with the Pacific, a region with which most of them would have had very limited familiarity prior to the Spanish-American War.

This map was lithographed in 1902 by Norris Peters Co. and published as part of Senate Document 280 of the 1st Session of the 57th U.S. Congress in 1902, titled A pronouncing gazetteer and geographical dictionary of the Philippine Islands, United States of America, with maps, charts, and illustrations… The map is not independently cataloged as belonging to any institution and has no known history on the market, while the entire senate document is well-represented in institutional collections but scarce to the market.

Good. Repaired tear at left towards bottom. Fold lines visible in places.
Looking for a high-resolution scan of this?