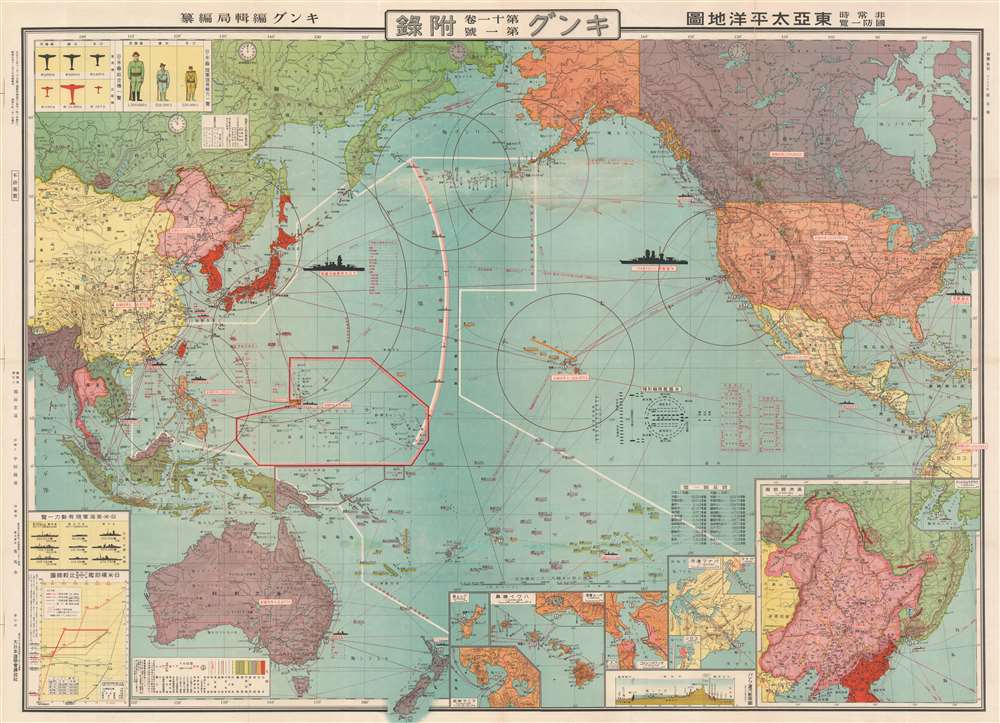 5 years before the Pearl Harbor Attack.

This is a fascinating and important 1935 (Showa 10) Nakata Fukuzou Pre-World War II Japanese propaganda map of the Pacific foreshadowing the Pearl Harbor attack, the Aleutian Islands Campaign, and the Philippine Campaign. Covering the entire Pacific, from the Bay of Bengal to New York and from the Bering Strait to New Zealand, this map anticipates the overarching Japanese strategy for World War II in surprising detail.

The map juxtaposes Japanese forces and territory with Soviet and American Forces. The Japanese Empire, including Japan, Hokkaido, Korea, Taiwan, southern Sakhalin, and Micronesia, is outlined in red, while areas of Japanese influence, including Korea and Thailand, are in lighter red. Important flight and shipping routes across the Pacific are noted, as are military bases.

When this map was issued, World War II (1939 – 1945) had not yet officially broken out, but in the Pacific, preliminary conflicts between Japan and its neighbors had been underway since the 1920s. The Japanese strategy for dominating the Pacific is here clearly illustrated. The map identifies 8 spheres of influence, which, if their center was controlled, control of the entire region would follow. These includedThe map further illustrates a defensive belt of Japanese planes and warships just west of Hawaii extending into the South Pacific that was intended to limit American expansion into the western Pacific. Japanese diaspora populations are noted in Canada, the United States, Mexico, China, Manchuria, Australia, Micronesia, and the Philippines - possibly intended to validate Japanese claims to these regions. Insets in the lower right detail Hawaii, including a large inset of Pearl Harbor, the Panama Canal, San Francisco, Manchuria, Guam, Manila, and Vladivostok. There are also several comparative charts illustrating the relative sizes of the American, Japanese, British, and Soviet armies and navies. Ships at various points on the map describe the naval forces of several countries, including the U.S. fleets in the Philippines, near San Francisco, a 'spy fleet' near the Panama Canal, an Atlantic Fleet near New York, British fleets near Hong Kong, a French fleet based in Indochina, an Australian fleet, and even a Canadian fleet. Just southeast of Hawaii is an interesting diagram detailing the deployment of the U.S. Pacific Fleet.

We Should Have Known…

After the attack on Pearl Harbor, this map was republished in the Herald American Pictorial Review on Sunday, August 22, 1943. According to the paper, the map was stolen by a Korean cabin boy from a Japanese military officer on a tour of the United States in 1941, and then passed on to a Korean American activist and spy in Washington D.C. named Kilsoo Haan (한길수).

Japan-U.S. Tensions Prior to the Pacific War

Although Japan and the U.S. only went to war in December 1941, a string of incidents stretching back decades had led to that point. The potential for tensions was evident in 1905, when, on the sidelines of negotiating the Treaty of Portsmouth, the Taft-Katsura Agreement was crafted to avoid a conflict over the Philippines or Korea. Japan felt slighted at the Paris Peace Conference when Woodrow Wilson and other Western leaders refused to insert a racial equality clause into the Treaty of Versailles, and when the U.S. teamed up with other Western powers to limit Japan's naval capacity and return Qingdao to Chinese sovereignty at the 1922 Washington Naval Conference. Relations worsened significantly with Japan's invasion of Manchuria in 1931 and further encroachments into China throughout the 1930s, culminating in the deaths of American civilians during the Second Sino-Japanese War (1937 - 1945). U.S. support for Chiang Kai-Shek's regime and criticism of Japan's militarism brought the relationship to the breaking point. When Japan occupied southern Indochina in July 1941, the U.S., Great Britain, and the Netherlands imposed an oil embargo (effectively cutting off its oil supply) and froze Japanese assets in the U.S., the main catalysts for the Pearl Harbor attack.

King (キング) was a monthly general interest magazine published from 1924 - 1957 by Dai Nippon Yūbenkai Kōdansha (大日本雄辯會講談社, now known simply as Kōdansha). It was one of the most important magazines in Japan in this period. Its wide range of material combined with a readership that cut across class and geographical divisions meant that King was an important contributor to the birth of Japanese mass culture. Along with King, Kōdansha published magazines including Women's Club (婦人倶樂部) and Boy's Club (少年倶樂部) and had become a major shaper of Japanese culture and public opinion by the 1930s, controlling 70% of the magazine market.

This map was printed December 3, 1934 (Showa 9) and published on January 1, 1935 (Showa 10) as an addendum to the January 1935 edition of King magazine. It was engraved by Mori Yoshio (森芳雄) of Atlas Publishers (アトラス社), printed by Nakata Fukuzou (中田福造) of Shūeisha (秀英舎), edited by Fuchida Tadayoshi (淵田忠良) of the King Editorial Department, and distributed by Dai Nippon Yūbenkai Kōdansha (大日本雄辯會講談社).

Nakata Fukuzou (中田福造; fl. c. 1933 - 1935) was a Japanese cartographer who produced maps of Japan and the Pacific in the period of increasing Japanese imperialism. Learn More...


Mori Yoshio (森芳雄; December 21, 1908 - November 10, 1997) was an accomplished Japanese painter and ocassional cartographer who also worked in the film industry during the Pacific War. He primarily painted in the Western style and was selected to study painting in France in his youth after winning several international awards. After the war, he continued to paint and taught at the Musashino Art University in Tokyo. Learn More...


Fuchida Tadayoshi (淵田忠良; Fl. c. 1928 - 1940) was a Japanese editor and writer with Dai Nippon Yūbenkai Kōdansha (大日本雄辯會講談社), a major magazine publisher of the era. He was responsible for overseeing a series of maps of China, Manchuria, Mongolia, and other regions that were published as special addendums to Kodansha publications, especially King (キング) magazine. Learn More...