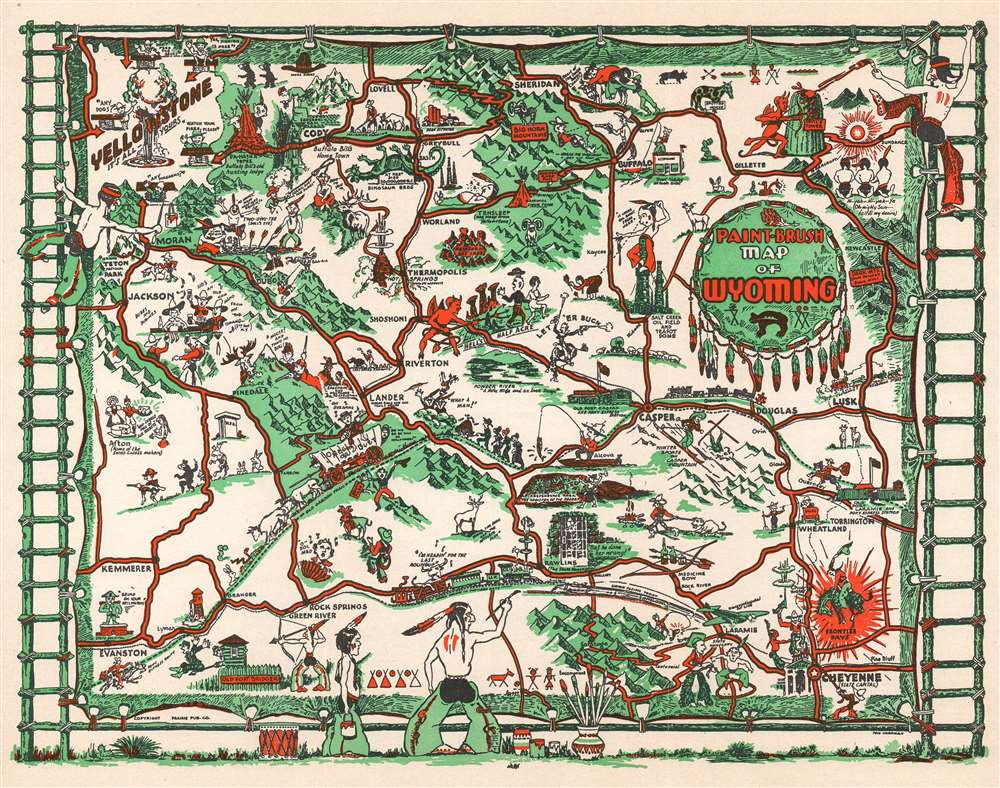 This is a 1938 Thomas Graham Carrigen pictorial map of Wyoming. The map depicts the entire state and highlights some of the most well-known locations in Wyoming, including Yellowstone National Park, Grand Tetons National Park, and Devil's Tower. Drawn conceptually as a hide being stretched and tanned in the traditional Native American manner, the map has ostensibly been 'painted' on the hide by several different Native Americans, two of which are illustrated climbing ladders on either side of the map, while a third is seen painting along the bottom of the hide. Vignettes from Wyoming's history, short comments, and other comical moments are included throughout. Native Americans and white settlers are illustrated coexisting with relative ease (which may have been wishful thinking on Carrigen's part), including a couple in Afton, situated along the left side of the map, offering some of their homemade Swiss cheese to a Native American.

Yellowstone, of course, occupies a large part pf the upper-left corner, complete with an illustration of Old Faithful in mid-eruption and several park rangers giving advice about the rules of spending time in the park. Further south, the Old Pony Express line is illustrated, along with several frontier forts. The Union Pacific Railroad traverses the lower part of the state as well, with an old steam train heading toward Cheyenne and a more modern train heading toward California. The Oregon Trail and the Mormon Trail are both referenced, marked by a covered wagon pulled by oxen. Fishermen and hunters abound, including a pair of hunters that have cornered a particularly angry moose, and another seen tiptoeing through the wilderness, with several animals tiptoeing behind him. The modernity of aviation and oil wells are also referenced. Numerous cities and towns are labeled, including Cheyenne, Laramie, and Cody, Buffalo Bill's home town.

This map was drawn by Thomas Graham Carrigen and published by the Prairie Publishing Company of Casper, Wyoming, in 1938.

Thomas Graham (Tom) Carrigen (February 20, 1896 - January 2, 1967) was an American photographer and artist. Born in East Chicago, Indiana, Carrigen spent some of his youth in Indiana before moving to Clovis, New Mexico with his parents. The family left Clovis two years later and moved to Denver, where Carrigen attended school. After serving in the U.S. Army for two years during World War I, Carrigen found employment as a traveling washing machine salesman until 1920, when he was let go from that position while in Casper, Wyoming. Carrigen stayed in Casper, where he found work as a draughtsman and then as a projectionist for one of the town's theatres. Then, in 1922, he and his wife Eva opened a photography studio, called De Luxe Studio, that was located on Center Street. Eventually, the studio was renamed and became the Carrigen Studio. Carrigen was a man of many talents, known for his music, etchings, and art prints; all of which greatly entertained the people of Casper. He loved photography and it was his hobby as well as his business. He and his wife had one daughter, Eleanore. Learn More...