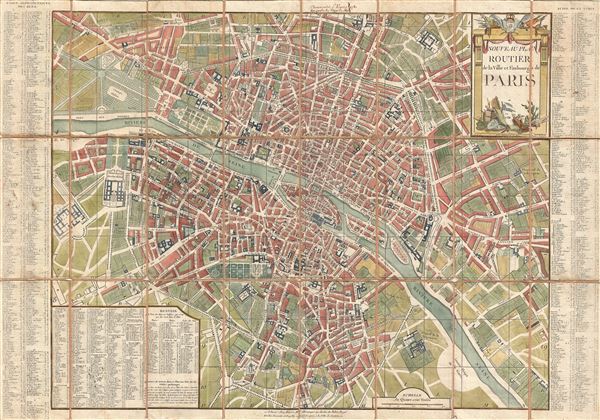 A fine 1781 dissected pocket map of Paris issued by Esnauts and Rapilly. Centered on the Seine, this map depicts Pre-Revolutionary pre-Haussmann Paris. Covers Paris on Both sides of the Seine from the Ecole Militaire to the Hospital de la Roquette, extends north as far as Montmarte and south roughly to Les Gobelins. Produced at the height of French dominance of the cartographic arts, this map is a masterpiece of the engraver's art. Individual buildings, fields, streets, hills, valleys, orchards, and public gardens are revealed in breathtaking detail. We can even see the incomplete state of the northern wing of the Louvre Palace.

As this map was being drawn Benjamin Franklin was the toast of the town, visiting to negotiate the Treaty of Paris that formally ended the American Revolutionary War. Though Revolutionary sentiment was high among the Parisian populace, it had not yet taken on the radicalism that would soon follow. Thus street names and building names here reflect their pre-Revolutionary status rather of the more egalitarian nomenclature adopted later in the Revolution (ie. Palais Royal = Palais de l'egalite).

This type of map, known as a pocket or case map, is designed with the traveler in mind and while it displays beautifully unfolded, is designed to fold and fit in a vest or coat pocket. It accordance with its purpose, the map has been dissected and mounted on linen in 24 sections. This system was devised in the 18th century to protect folding maps against damage caused by repeated folding and unfolding. The linen backing absorbs the stress of folding and can easily be mended or replaced, thus preserving the integrity of the actual paper document. Folded this map fits into a beautiful brown tooled leather slip case, which is included.