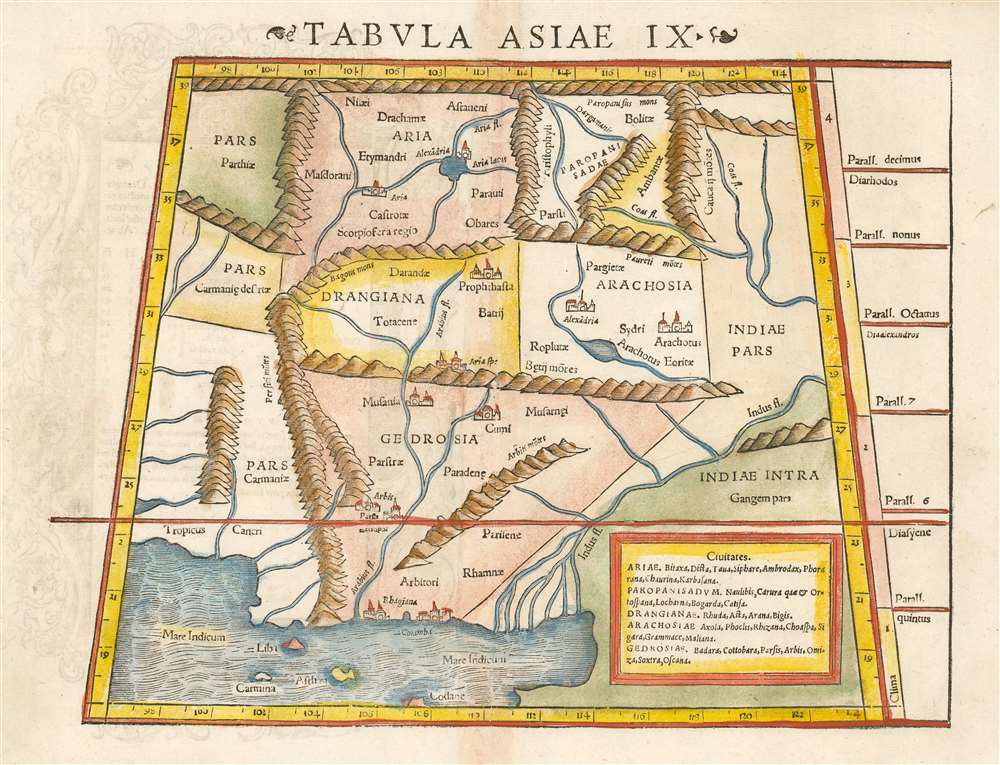 Afghanistan and Pakistan as known in the Classical Era

This 1552 Munster map depicts the areas west of the Indus River Delta, including present-day Pakistan, Afghanistan, and eastern Iran as they were known to the second-century geographer, Claudius Ptolemy. It appeared in the final, 1552 Munster edition of Ptolemy's Geographia. The regions of Aria, Drangiana and Arachosia refer to Afghanistan; Gedrosia is roughly equivalent to the Pakistani province of Baluchistan. The portions of Parthia and Carmania shown in the western part of the map are part of modern-day Iran. Despite being shown pictorially, the course of the Indus River and the depiction of the mountainous region bordering Persia is remarkably correct. The table at lower right indicates place names that had changed between Ptolemy’s time and that of Munster.

This map appeared in Sebastian Munster's modernized Ptolemy, which was printed in four editions in 1540, 1542, 1545 and 1552. The typography of this example identifies it as belonging to the 1552 edition. Nine examples of the separate map appear in OCLC in various editions; the entire book is held by a number of institutions. This is a map that appears on the market from time to time.

Munster, S./Ptolemy, C. Geographia Universalis (Basel, Petri) 1552     Following in the footsteps of Martin Waldseemuller and Lorent Fries before him, Sebastian Munster edited and published a modernized version of Claudius Ptolemy's Geographia. This appeared in six Latin editions in 1540, 1541, 1542, 1545, 1551 and 1552. According to Karrow, Munster based the text on the Latin translation of Willibald Pirkheimer, but he carefully collated it with previous editions, adding notes of his own. The first three editions contained 48 maps, consisting of 27 based on Ptolemy's ancient geography, and 21 maps based on modern geographical knowledge. The latter three editions contained 54 maps, comprised of the same ancient works but with six of the modern maps discarded, and twelve new ones added. For the collector, the modern maps are of sharpest interest. Some were based on Waldseemuller's geography, but many were based on Munster's own surveys and those of other European geographers whose assistance Munster had been able to enlist. Most of these would be reprised in Munster's magnum opus, Cosmographia Universalis. A disproportionate number of Munster's modern maps show contemporary geographical knowledge of the their respective areas for the very first time: The first map to show the continents of the Western Hemisphere; the first map to focus on the continent of Asia; the first modern map to name the Pacific Ocean. Even in cases where earlier maps exist, Munster's works very often remain the earliest such acquirable by the collector.