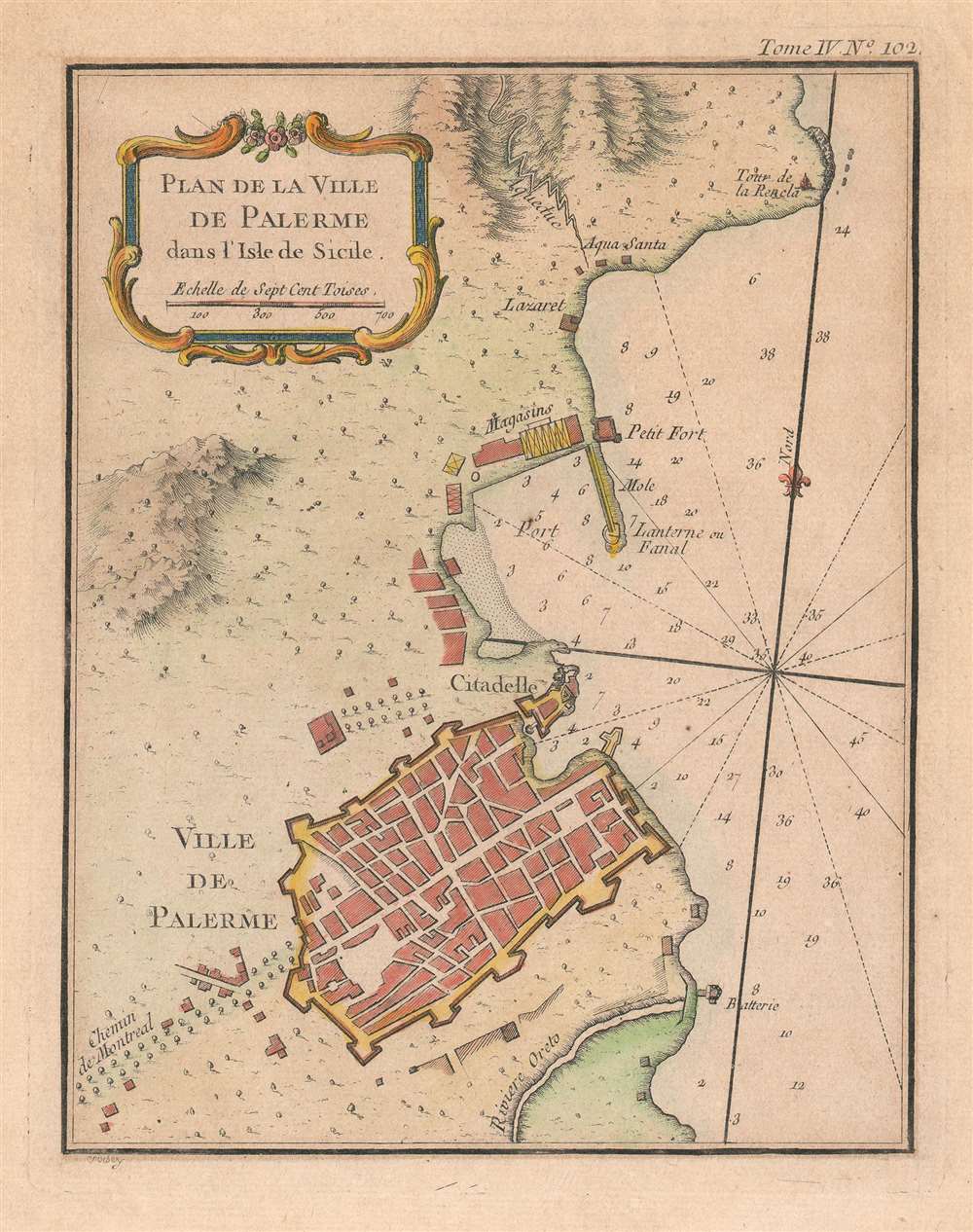 This is a beautiful 1764 Jacques-Nicolas Bellin city plan or map of Palermo, Italy. The city occupies the bottom portion of the map, with its citadel and shore battery both labeled. its city walls are clearly illustrated. The Chemin de Montreal (the road to Monreale) is labeled to the left of the city and heads west.The Oreto River appears south of Palermo, while the city's port is to its north. A small fort and storage facilities near the port are both illustrated and labeled, along with a signal lantern. An aqueduct brings water from the nearby mountains to a site labeled 'Aqua Santa', which would translate to 'Holy Water'. Today, Palermo is the economic and tourist capital of Sicily and draws people because of its history, art, culture, music, and food. Its Mediterranean climate, incredible architecture, and nightlife all appeal to tourists. The city is also home to eight UNESCO World Heritage sites dating from the era of the Norman Kingdom of Sicily (1130 - 1194): three cathedrals, two palaces, and a bridge. Two other cathedrals, in Cefalù and Monreale, are also part of the UNESCO World Heritage Site designation.

This map was drawn by Jaques-Nicolas Bellin, engraved by P. Croisey, and published by Bellin in his Le petit atlas maritime in 1764. Three examples are cataloged in OCLC and are part of the institutional collections at the Bibliothèque national de France in Paris, the Bayerische Staatsbibliothek in Munich, and the Biblioteca Nacional de España in Madrid.


P. Croisey (fl. c. 1765 – c. 1800) was a French line-engraver active in the 18th century. Croisey was based in Versailles, France and is best known for his fine portrait of Marie Antoinette, when Dauphiness. He also maintained a location on Rue Haute-Feuille, Pairs. One of his early trade cards survives in which he describes himself as a geographical engineer and engraver of civil and military architecture, topography, and geography. His wife, Madame Croisey was also an engraver, specializing in music and text. He died around 1800. Learn More...