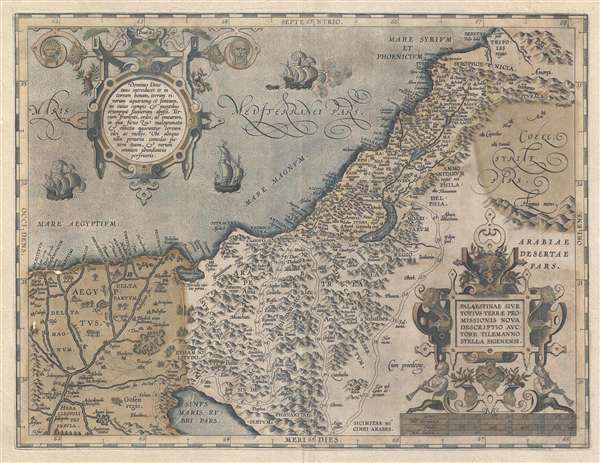 This is an old color 1603 Abraham Ortelius map of Palestine or the Holy Land. The map covers from the ancient city of Berytus (Beirut, Lebanon) to the Red Sea and from the Nile River to Damascus (Syria). The map shows the route taken by the wandering Hebrews after the Exodus from Egypt across the Red Sea. The Dead Sea is anomalously depicted in crescent form. A baroque title cartouche sits at the lower-left with a scale underneath. At the upper-right, another decorative cartouche contains a text which describes the area. There are three ships in the Mediterranean, one of which appears to be towing a skiff.

Cartographically, this map is derived from the work of Tileman Stella, an earlier German mapmaker. In contrast to much of Ortelius' other work, which emphasizes the most recent information, his Palestinae Sive Totius is more of a historical map and the geography, spiritual. For Ortelius, who was devout, Old Testament geography was sacred, and no amount of historical or empirical evidence could change what was divine.

This map was printed in 300 copes to accompany the 1603 Latin edition of Ortelius' iconic atlas, the Theatrum Orbis Terrarum.