1835 Bradford Map of Israel, Palestine or the Holy Land 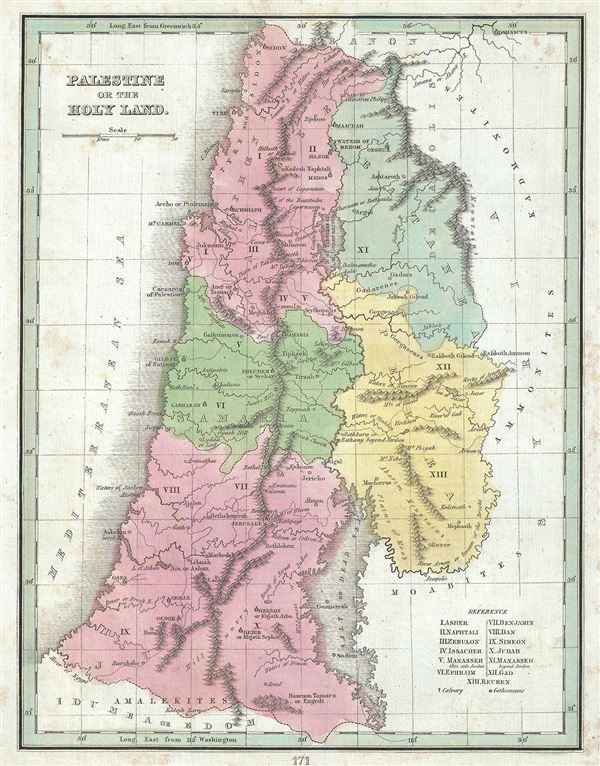 1835 Bradford Map of Israel, Palestine or the Holy Land

This is an interesting 1835 example of the map of Israel, Palestine or the Holy Land by the important American mapmaker T. G. Bradford. It covers the region from Sidon south to the southern tip of the Dead Sea and includes the modern day nations of Israel, Lebanon and Palestine as well as parts of Jordan and Syria. The regions claimed by the various tribes of Israel are noted with a key in the lower right quadrant. It covers the region as it existed in Biblical times and marks both ancient and contemporary place names as well as the locations of Biblical events and ruined cities. Identifies numerous cities, river systems, historical sites and mountain ranges.

The map was published as plate no. 171 in Thomas G. Bradford's 1835 Comprehensive Atlas Geographical, Historical and Commercial.  Bradford's atlas, published in 1835 was an important work on many levels.  First, it was one of the first American atlases to follow an encyclopedic format, offering readers extensive geographical and statistical tables to supplement the maps themselves.  Second, it was published in Boston and influenced the city's rise as a publishing center later in the 19th century (at the time most publishing in the United States was restricted to New York and Philadelphia).  Third, this atlas was the first to contain a separate and specific map showing the Republic of Texas.  Fourth and finally, Bradford's atlas in some instances broke the Euro-centric mold regarding atlas production.  Among other things, Bradford focused his atlas on the Americas and abandoned the classical decoration common in European atlases in favor of a more informational and inherently American approach.