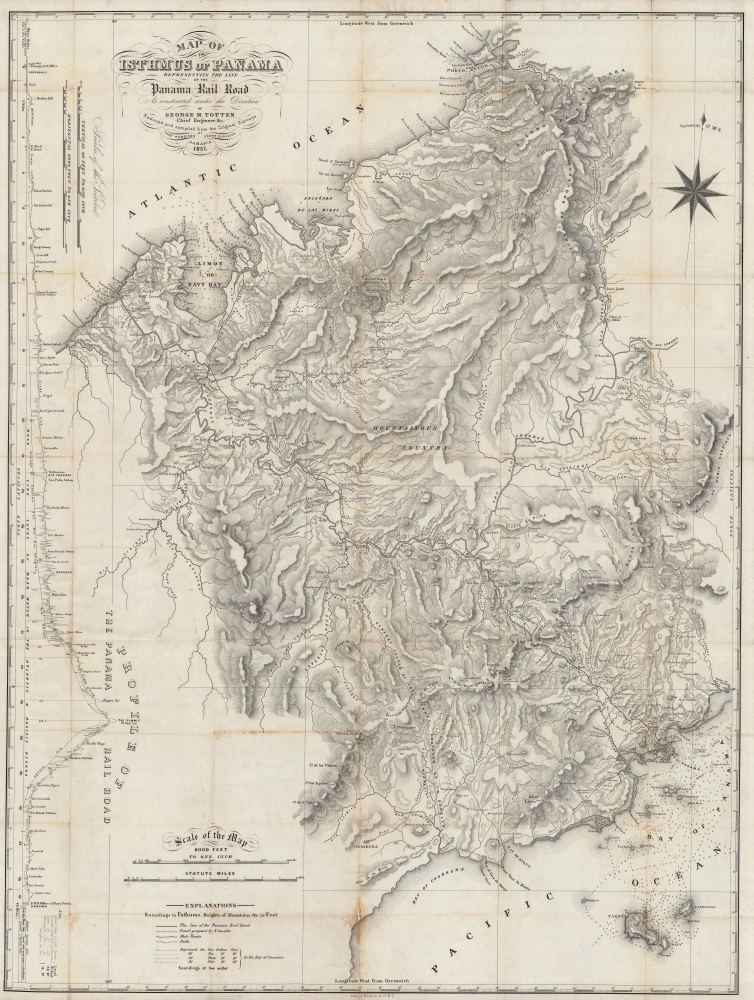 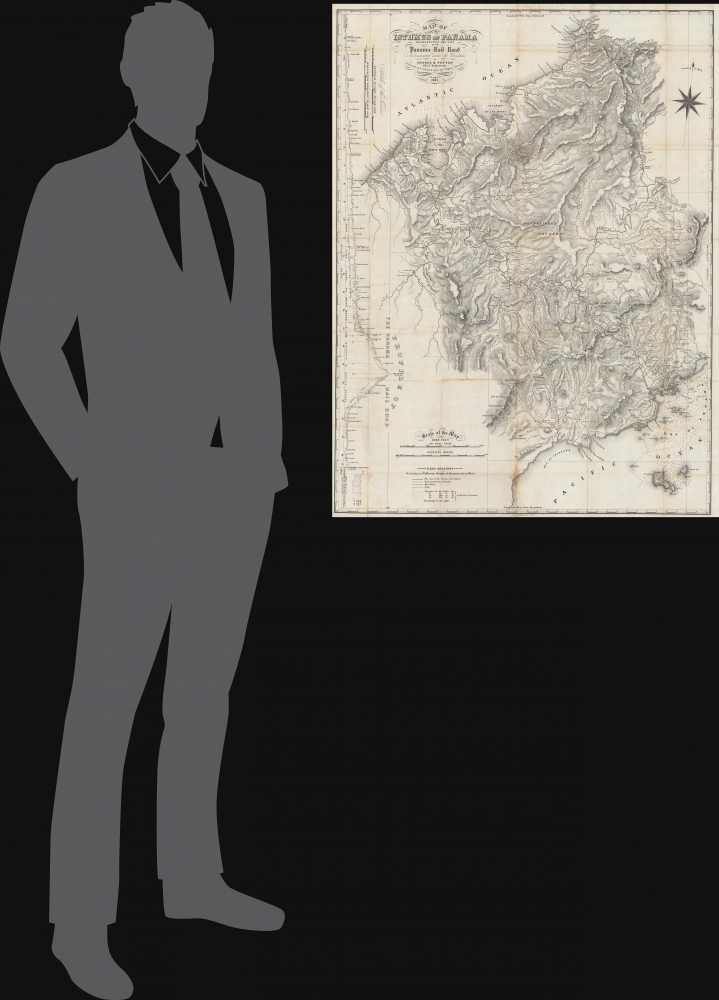 A fascinating 1857 folding map of Panama, highlighting the course of the recently-completed Panama Railroad and the proposed Panama Canal. It was produced by George Totten, the railroad's chief engineer, relying on earlier surveys by Thomas Harrison.

The narrowest part of the isthmus is displayed in remarkable detail, with waterways, elevation, settlements, the course of the railroad, and the route of a proposed canal indicated. Occasional notes describe terrain, such as 'swamp,' 'beautiful,' and 'undulating savanna.' On navigable waters, soundings, hazards, islands, and coastal features are noted. A profile of the terrain across the isthmus is provided at left. Much of the land here illustrated was flooded with the 1913 damming of the Charges River, creating Gatún Lake and facilitating the Panama Canal.

The proposed canal was laid down by Napoléon Garella, a French engineer sent to survey a potential canal route. Garella's scheme failed to attract funding and was abandoned. It is notable for lying considerably to the west of the ultimate canal course from Colón to Panama City.

Less well-known than the more famous canal, the Panama Railroad was the first major trans-isthmus link and an engineering marvel in its own right. The idea for a trans-continental channel between the Pacific and Atlantic can be traced to the Spanish colonial period, when roads and trails crossed the isthmus. Must such roads fell into disrepair during the Napoleonic Wars and Latin American wars of Independence. Here thye are noted here as 'now only practicable during the dry season.' Alexander von Humboldt, Simon Bolívar, and Andrew Jackson all proposed building a more durable route across the isthmus, and plans began in earnest in the 1830s for a railroad or canal. However, logistical and financial challenges ruined these early efforts before they could get off the ground.

A plan in the late 1840s gained more traction, thanks in part to fortuitous timing, coinciding with the California Gold Rush (1848 - 1850). Even prior to the Gold Rush, the growing presence of Europeans on the west coast of North America demanded an easier connections between the Atlantic and Pacific. American businessman William Henry Aspinwall and his partners founded the Pacific Mail Steamship Company in 1848 and immediately set about drumming up interest and capital for a railway in Panama under the auspices of the Panama Railroad Company. The project's chief engineer, George Totten, had to contend with incredible challenges, including swampy ground, dense forests, broiling heat, and tropical diseases.

The first task was to construct a city on Panama's Atlantic coast for unloading the necessary supplies and rolling stock for the railway. The city of Aspinwall (Colón) was founded on the island of Manzanillo, which was then connected to the mainland over a causeway built over pile-driven timbers. The initial portion of the railway was one of the most difficult, and 20 months of work resulted in just 8 miles of track at the cost of hundreds of workers' lives and staggering investment. At this point, the railway reached navigable waterways across the isthmus to Panama City. Forty-niners eager to get to California were happy to pay handsomely for the 8-mile ride, providing necessary capital for completion of the railway. Still, the project was not finished until January 1855. It necessitated the construction of more than 150 bridges and culverts, as well as constant infusions of gravel to shore up the roadbed, and a massive excavation at the Culebra Cut. In all, the project cost $8 million and the lives of as many as 10,000 workers, hailing from as far away as China. It preceded the more celebrated 'Transcontinental Railroad' in the U.S. by five years and greatly facilitated travel between the Atlantic and Pacific.

Some fifty years later, the Panama Canal project was undertaken, following the course of the railway. Rather than replacing the railroad, the two avenues of transportation became symbiotic, to the extent that the railway was later renamed the Panama Canal Railway. After becoming unprofitable and falling into disrepair in the late 20th century, control was turned over to the Panamanian government. In the early 21st century, a group of private entities were given control of the railway and undertook long-overdue renovations, allowing it to continue its role as an important freight and passenger service.

This map was prepared by George Totten, the chief engineer of the Panama Railroad who built several other railways in Central and South America. Totten relied on earlier surveys undertaken by Thomas Harrison, a British surveyor based in Jamaica. It was printed in New York by Endicott. This map is held by 11 institutions worldwide and is scarce to the market, especially in such good condition.

Thomas Harrison (c. 1823 - 1894) was a British surveyor active in the Caribbean and Central America, who most notably served as the first Government Surveyor of Jamaica. He had apprenticed under Edward McGeachy (d. c. 1851), whom he succeeded as Surveyor of the county of Surrey on Jamaica. Harrison built upon the work of McGeachy and fulfilled the latter's dream of conducting a detailed scientific survey of the entire island. Learn More...

Good. Wear, discoloration, and some loss along the fold lines, repaired on the verso, including areas of infill.