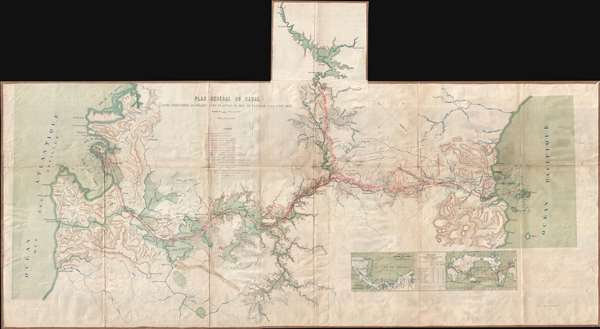 This is a scarce and highly detailed c. 1895 French topographical planning stage map of the Panama Canal issued by the French Compagnie Nouvelle du Canal de Panama. The map is oriented to the northeast with Panama at the right and Colon at the far left. The 74 miles of proposed canal is mapped from the Baie of Limon. As this is an actual planning map for the revived canal project under the Compagnie Nouvelle du Canal de Panama, there is a wealth of detail regarding topography, river rerouting, and the proposed canal route, and more. There are also manuscript annotations in pencil, clearly related to the construction work, but these have faded and are now indecipherable.

The Panama Canal was the vision of the French diplomat Ferdinand de Lesseps. Lesseps had been successful in the excavation of the Suez Canal and saw the construction of Panama Canal as a grander, more lucrative, next project. He incorporated the Compagnie Universelle du Canal Interoceanique on March 3, 1881. Unprepared for the jungle climate and corrupt political system, all progress was soon mired by disease, poor planning, political posturing, fraud, and bankruptcy. The Compagnie Universelle du Canal Interoceanique was dissolved by French bankruptcy court on February 4, of 1889. Five years later, in 1894, the company's assets were reorganized under new investors as Compagnie Nouvelle du Canal de Panama. This organization immediately began new plans to resume excavations, including producing detailed new maps of the project – among them this large planning stage map.

The map here is most likely derived from Lesseps' plan to reroute the Charges River creating a sea-level canal without tunnels or locks. Ultimately, although the route here, from Limon Bay to Panama City, was roughly followed, the notion of a lock-free sea level canal proved impractical due to the need to tunnel through the Continental Divide at Culebra. Ultimately, the French lost control of the canal project to the United States. In 1903 the Hay-Bunau-Varilla Treaty between Panama and the United States granted the United States canal-building rights and the sole right to operate and control the Canal Zone (q.v.). The Compagnie Nouvelle du Canal de Panama sold its holdings to the United States in 1904. The canal officially opened under U.S. Management ten years later in 1914.

The map was engraved and printed in France by L. Courtier, 43 Rue de Dunkerque, Paris.

L. Courtier (fl. 1890 – 1910) was a French printer and engraver active in Paris in the late 19th and early 20th century. Courtier was the publisher of the Annales des Mines, a journal dedicated to the mining industry. Most of his work focused on railroad, mining, and other major engineering projects, including at least one important map of the Panama Canal. Learn More...