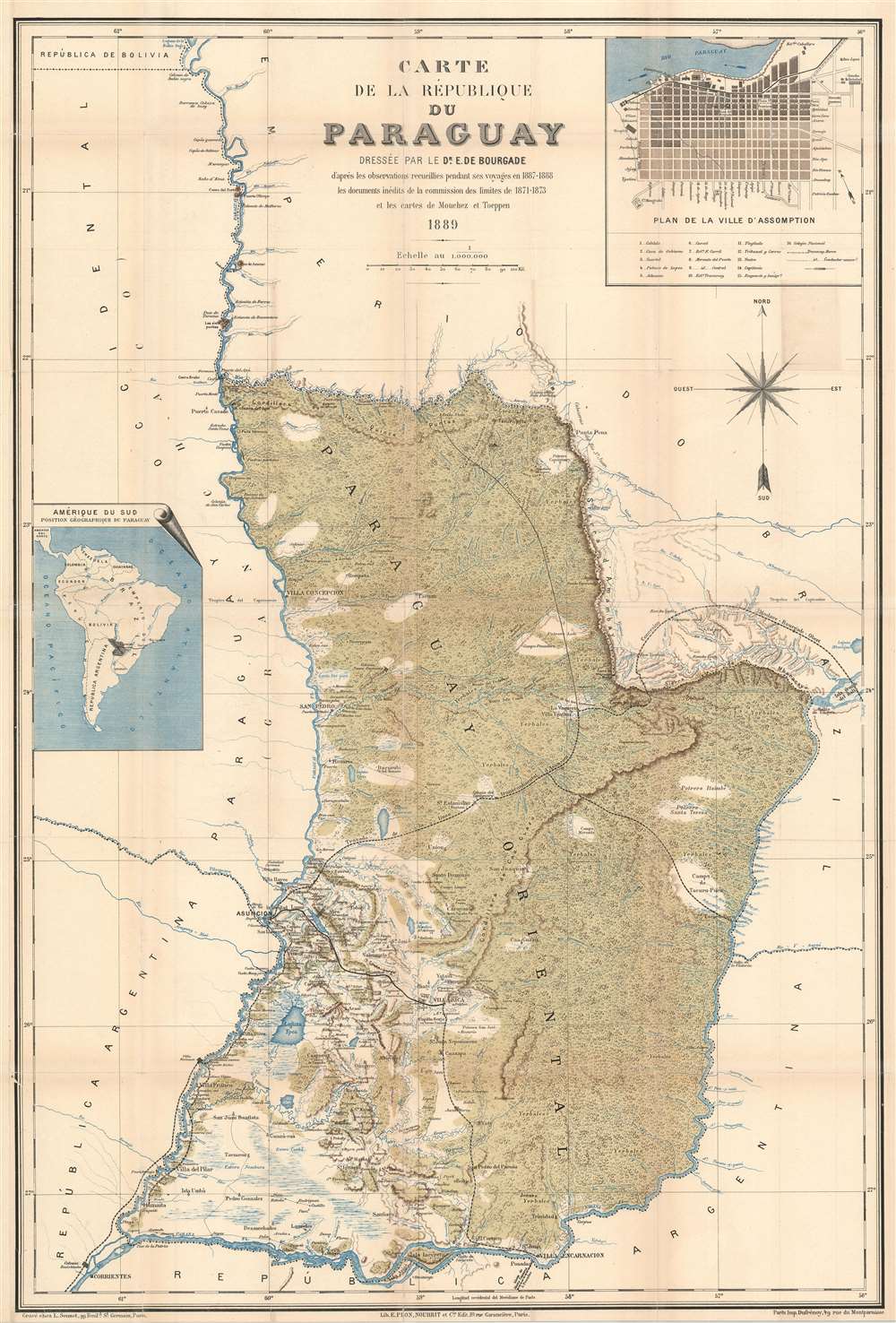 This is an 1889 Emmanuel de Bourgade La Dardye map of Paraguay. The map depicts the country after the Paraguayan War, which resulted in Paraguay forfeiting massive amounts of territory to both Argentina and Brazil. After suffering a devastating defeat in the war, these annexations forced Paraguay into the boundaries presented here, bounded by the Parana and Paraguay Rivers.

De Bourgade spent two years exploring and researching in Paraguay. This map, which was the best-published map of Paraguay at the time, summarizes all de Bourgade's geographic knowledge of the country. Cities, towns, and villages are labeled, including Asuncion. The country's railroads are noted, along with major roads connecting Villa Rica and Asuncion. An inset in the upper right details Asuncion and numerically identifies sixteen locations, which correspond with a key along the inset's bottom border. A second inset, along the left border, situates Paraguay on the South American continent.

In compiling this ground-breaking map, de Bourgade consulted the best surveys available. The works of Ernest Amédée Barthélemy Mouchez and Dr. Hugo Toeppen, both landmark maps of Paraguay, provided valuable information for de Bourgade, as did the unpublished maps created by the International Boundary Commission. The Boundary Commission 'determined the frontier line between Paraguay and Brazil' after the Paraguayan War (1864 - 1870). However, in his book on Paraguay, de Bourgade states that these maps did not 'completely accord with [his] own person observations' in certain areas.'

This map was created by Emmanuel de Bourgade La Dardye to accompany his book Le Paraguay, first published in 1889. Five examples of the separate map are cataloged in OCLC. They are part of the institutional collections at the University of Chicago, the Biblioèque nationale de France, the Biblioteca Nacional de España, the Staatsbibliothek zu Berlin, and the University of Cambridge.

Emmanuel de Bourgade La Dardye (1854 - 19xx) was a French doctor. Born in Tiers, he received his doctorate in medicine in Paris in 1884. He then spent from 1887-1888 in Paraguay, where he undertook extensive field studies. He published a book entitled Le Paraguay in 1889 that was accompanied by an incredibly detailed map of the country. At some poiont during his lifetime he was named Vice President of the Academy of Sciences of Paraguay.


L. Sonnet (18xx - 19xx) was a French engraver active in Paris during the late 18th century and early 19th century. His works include plans of Paris and Versailles and an important map of Paraguay.


Eugène Dufrenoy (January 21, 1834 - 189?), aka Dufrenois, was a French printer, lithographer, and engraver active in Paris during the second half of the 19th and the early 20th centuries. Dufrénoy born in Bourg-la-Reine, in what is today the southern suburbs of Paris. He was based, for at least part of his career, at 34 Rue du Four, Paris. In 1881 Dufrénoy acquired a large space at 49 Rue du Montparnasse. This space still operates as a printshop with Dufrénoy's old presses as IDEM Paris. ˜

Good. Laid down on archival tissue. Some wear along original fold lines - especially at fold intersections some of which exhibit slight loss.