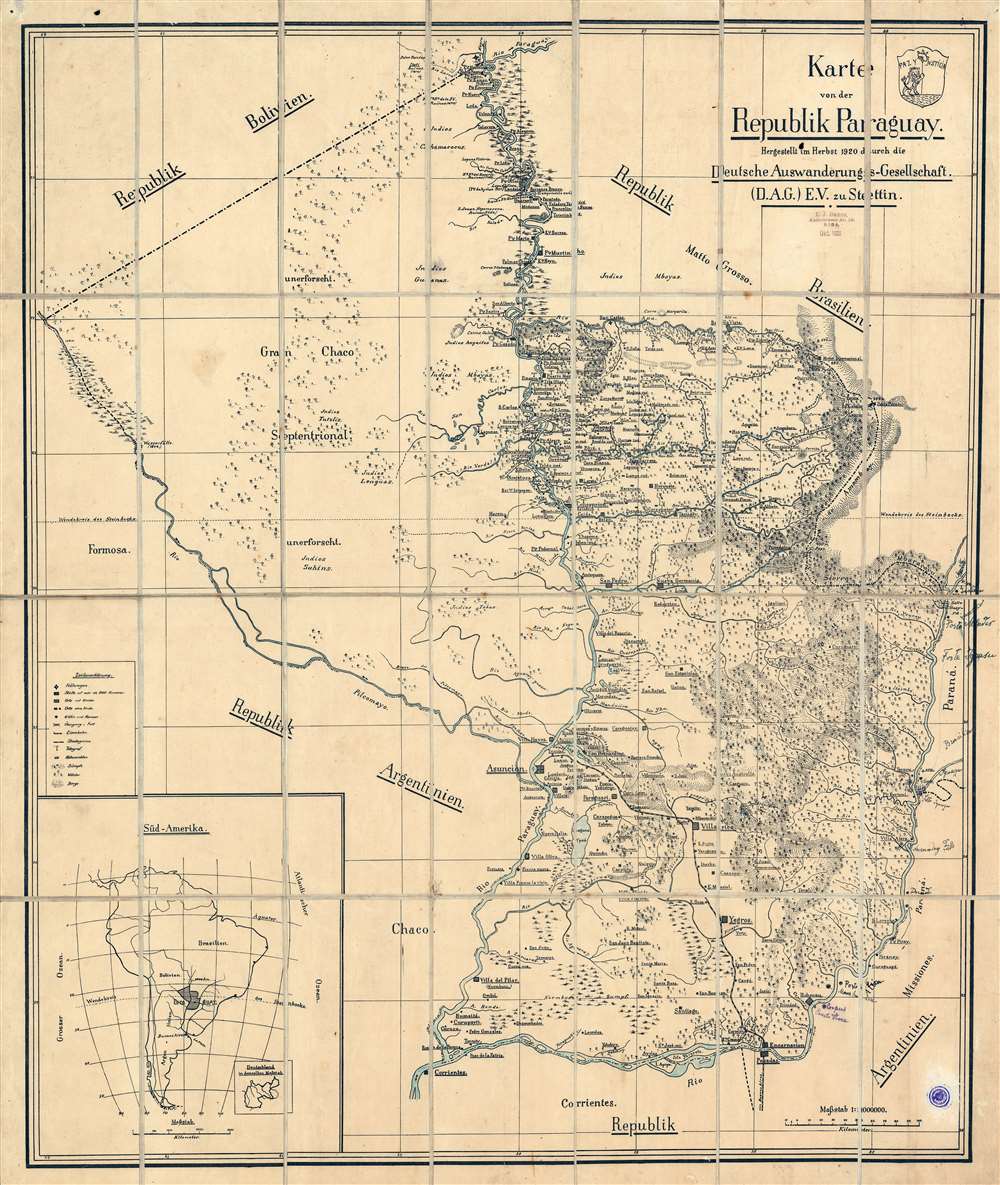 This is an extremely rare 1920 map of Paraguay, separately published by the Stettin German Emigration Society (Deutsche Auswanderungs-Gesellschaft) in support of an effort to establish a Paraguay colony.

This large folding map of Paraguay shows the greatest detail between the Paraguay River and the Paraná. It identifies forts, cities, and settlements as small as individual farms, denoting towns and distinguishing between those with or without churches. Forests, mountains, and swamps are illustrated pictorially. The railroad connecting Asunción with Buenos Aires is shown, as are telegraph stations throughout. To the west of the Paraguay River, the unerforscht (unexplored) regions of the Gran Chaco are marked with the names of the indigenous tribes. To the east, the Guairá Falls are marked on the upper Paraná: these were a series of immense waterfalls on the border between Brazil and Paraguay. The falls - considered a natural wonder - ceased to exist in 1982 when they were inundated by the construction of the Itaipu Dam.

Settlements in Paraguay - and Beyond

Along the east banks of the Paraná River, in Argentina's Misiones Province (formerly claimed by Paraguay, lost to Argentina in the Paraguay War) and in Brazil's Paraná province are marked a number of settlements, in manuscript. This highlights the influx of immigrants in the early 20th century. The villages of Corpus, Puerto Roca, (now Gobernador Roca) Porto Rico, Dorado (Now El Dorado, the third most populated city in the province), and Forte Iguazu (Puerto Iguazú) are noted in manuscript. Within the borders of Paraguay, the town of Colonia Independencia is marked in manuscript as well: it was founded by German settlers in January 17, 1919, mostly by retired World War I military from Baden-Württemberg and Bavaria. Other largely German settlements - the 'Nueva Germania' colony, and the cities of Encarnación and Hohenau - are printed to the map.

The D.A.G. of Stettin were one of a number of Auswanderungs-Gesellschaften, or emigration societies. These groups, usually unified by religion, were intended to pool resources for travel expenses, purchasing land, and building churches and schools. The establishment of these societies occurred in Germany throughout the 19th and early 20th centuries. This period saw significant German migration to the Americas - mostly to the United States. A relatively tiny number emigrated to Paraguay, whose depopulation during the disastrous Paraguayan War made the government eager to welcome settlers. By 1920, a number of German-speaking settlements had already been established (see below).

This specific emigration society is maddeningly obscure. This map appears to be the only printed record of the group and nothing is hinted of their religious affiliations. Stettin, at the time, was Prussian, and like the rest of Germany, suffered under the turmoil attendant to the Weimar Republic. The same economic and social pressures that would have spurred the settlers of Independencia would have likely also spurred the members of the D.A.G. zu Stettin, but it is not known if they were affiliated.

On the cover of the map, as well as below the title, there are dated library stamps for one E. J. Bahrs, with an address of Kalkstrasse 18, in Riga; one dated 1920, the other 1921. Bahrs was a commercial photographer there: his name and imprint appear on a number of postcards sold in the city during this period. Riga had a large, influential and successful German population; however, their power and class privileges came to an end following the Bolshevik revolution and the independence of Latvia in 1919. Although Baltic Germans would take part in Latvia's war of independence against Bolshevik Russia, independence brought about land nationalization and a displacement of Baltic Germans from positions of authority. Consequently, many Baltic Germans fled to Germany. It is not difficult to imagine that some - aware of the economic difficulties developing there - might wish to relocate further abroad.

This conflict, also known as the War of the Triple Alliance, was fought from 1864 to 1870 between Paraguay and the combined forces of Argentina, Brazil, and Uruguay. The deadliest inter-state war in Latin America's history, it went particularly poorly for Paraguay, which suffered incalculable human losses as well as territorial losses to Argentina and Brazil. Although the actual numbers are unknown, the Paraguayan War (1864 - 1870) resulted in a massive regional depopulation: as many as 90% of males were killed; and overall as high as 69% of the population died, mostly due to illness, hunger, and physical exhaustion. This catastrophe led Paraguay to the official policy - in the latter part of the 19th century and the beginning of the 20th century - of encouraging open settlement by European countries. The 1880s saw an influx of more than 5600 South American immigrants and some 2000 Europeans; between 1890 and 1919, far more European immigrants were welcomed than South American. In the 1910s, immigration spiked with 1,434 settlers coming from elsewhere in South America, as compared to 4,135 from Europe; numbers of European settlers skewed heavily to Italy, Spain, and Germany. This map appears within the context of this spike in immigration. Later, Paraguay saw a wave of immigration by Mennonites from Canada (driven by postwar insistence on the use of English in school) and Russia (driven by Stalinist persecution and the Ukraine famine).

While Paraguay was impoverished by the war, one of the territories she fought to retain benefited economically from its capture by Argentina. Like Paraguay, Argentina would institute laws to encourage immigration, but was better able to fund the new settlements. The map shows several new Argentine towns in the Misiones region, added in manuscript: Eldorado, (Dorado on the map), for example. This town was founded in 1919 by the German/ English Adolf Julius Schwelm, and was characterized by its planned agricultural colonies, experimental farms, citrus plantations, and the systematic cultivation of yerba mate. The region was also settled by Swiss, Danish and Ukrainian settlers.

Paraguay had already welcomed settlers in the underpopulated Chaco region, beginning with the 1856 founding by French immigrants of Nueva Burdeos (Nouvelle-Bordeaux) on the west bank of the Paraguay River. The town was renamed Villa Hayes in 1879 - chosen in honor of the United States President, Rutherford Hayes, who had arbitrated between Paraguay and Argentina after the Paraguayan War. His award of the disputed Gran Chaco region to Paraguay made him a national hero, hence the honor. Other towns appearing here, founded during the postwar period by European settlers include Yegros, originally settled by French colonists as Colonia Nouvelle Picardie, the first town in Paraguay built to a plan. Later the town attracted settlers from Germany and Switzerland.

Nueva Germania, shown here on the banks of the Aguaray-Guazú River about 250 kilometers from Asunción, was founded in 1886 by a group of emigres from Saxony. Led by Bernhard Förster and his wife, Elisabeth Förster-Nietzsche. Förster's outspoken anti-Semitic views led to his ostracism and the loss of a teaching job, came to Paraguay with the explicit goal of building a community underpinned by notions of Aryan superiority. The harsh environment, poor supplies, and hubris led to the death of most of the settlers by starvation and disease. Förster abandoned his remaining followers, committing suicide in San Bernardino, Paraguay, in 1889; his wife Elisabeth Nietzche returned to Germany in 1893 dedicating her life to lionizing Förster as a hero, and to capitalizing on her brother, Friedrich Nietzsche's life's work. She did so by repackaging it to reflect her husband's Aryan nationalism and antisemitism, qualities absent in her brother's labors prior to her interference. Eventually, she joined the Nazi Party, who had embraced the corrupted version of her brother's work.

In another effort to build a community based on racial lines, settlers from Australia in 1893 attempted to form a segregated commune of English-speaking, teetotalling, whites. In short order, the prohibition of alcohol, and maintenance of the 'color line' with respect to the locals, led to dissent in the community - especially after the second wave of colonists appeared the following year. A group of the original settlers broke off to found San Cosme, which can be found here on the banks of the Rio Paraná.

The town of Nueva Italia was established in 1904 by the Paraguay government for colonists from Italy: German and Ukrainian emigrants moved to live there later.

This map was printed as a separate issue in 1920, and appears to have had a single edition. We are aware of only two copies in institutional collections; one in the Staatsbibliothek zu Berlin, and the other in the Deutsche Nationalbibliothek Leipzig. This is the only example to have come on the market.