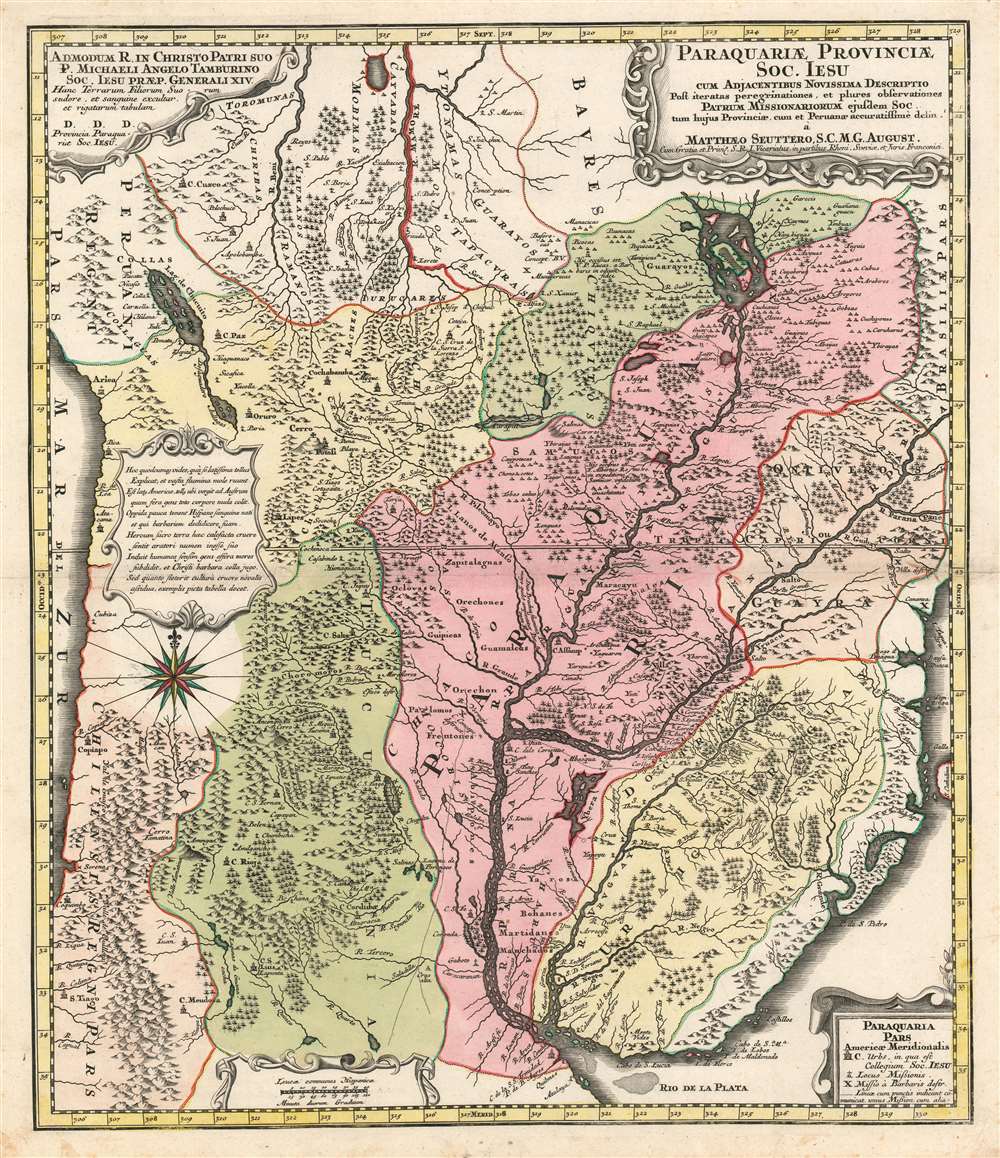 Chronicling Jesuit Activity in and around the Rio de la Plata.
$550.00

This is Matthias Seutter's 1730 map of Paraguay, showing specifically the Jesuit province of Paraguay and the surrounding regions including present-day Uruguay, and parts of Argentina and Brazil. This map, commonly given a date of 1730, is a faithful copy of a 1722 map of the same area produced by Juan Francisco D'Avila, which substantially improved from earlier maps of the region and provided what was the most complete map of the Rio de la Plata watershed available at the time. Furlong, in his Cartografia jesuttica del Rio de la Plata hailed the D'Avila map as 'without doubt the most complete and most comprehensive map undertaken by the Jesuits up to the middle of the eighteenth century' (Buenos Aires, 1936, p. 44). This map does not exhibit any of the added missionary tracks that appear on Antonio Marchoni's corrected 1732 iteration of the map, supporting a 1730 date. The map shows the full length of the Rio de la Plata from its source at the mythical Lake Xarayes (see below) to its mouth, at Buenos Aires and Montevideo. The map embraces central South America, and includes the Pacific coast from Peru to Coqimbo in Chile. Lake Titicaca (Chiquito, on the map) is shown, as is the famous Cerro Potosi, location of the Spanish Colonial silver mint - source of the massive wealth of silver drawn from South America by Spain via slave labor throughout the sixteenth and seventeenth centuries. Throughout the map are shown Jesuit missions - both active, and those destroyed by the indigenous population. Cities with Jesuit colleges are shown as well. As is not atypical for Jesuit maps, the locations of martyrdoms are also shown.

The mythical Laguna de Xarayes is illustrated here as the northern terminus, or source, of the Paraguay River. The Xarayes, a corruption of 'Xaraies' meaning 'Masters of the River', were an indigenous people occupying what are today parts of Brazil's Mato Grosso and the Pantanal. When Spanish and Portuguese explorers first navigated up the Paraguay River, as always in search of El Dorado, they encountered the vast Pantanal flood plain at the height of its annual inundation. Understandably misinterpreting the flood plain as a gigantic inland sea, they named it after the local inhabitants, the Xaraies. The Laguna de los Xarayes almost immediately began to appear on early maps of the region and, at the same time, to take on a legendary quality. Later missionaries and chroniclers, particularly Díaz de Guzman, imagined an island in this lake and curiously identified it as an 'Island of Paradise,'

Xarayes was, throughout the 18th century considered a possible gateway to the supposed riches of the Amazon interior.

Seutter's map was prepared for inclusion in his Grosser Atlas and was printed as early as 1730. (An OCLC notation for a 1709 issue would seem to be in error, as the progenitor of this map was not completed until 1722.) The map is well represented in institutional collections.