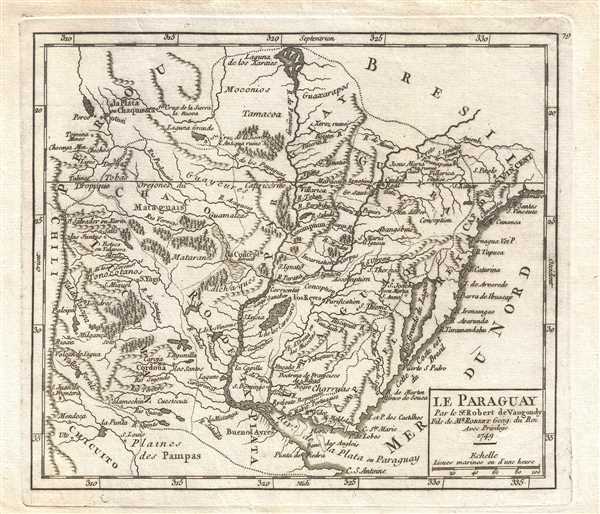 This is a 1749 Didier Robert de Vaugondy map of Paraguay. The map depicts from the border between Paraguay, Brazil, and Peru to Rio de la Plata and Uruguay (Uraguay) and from Chili to the Atlantic Ocean. The Laguna de los Xaraies is labeled along the top border a mysterious lake that appeared on maps of South America from about 1600 to 1850. The Laguna, located new Matte Grosso, was often associated with the gateway to the Amazon, legends of El Dorado, and the Earthy Paradise.

The name Xaraies comes from the Xarayes (a corruption of 'Xaraiés'), an indigenous people occupying what are today parts of Brazil's Matte Grosso and the Pantanal. When Spanish and Portuguese explorers first navigated up the Paraguay River, in search of El Dorado, they encountered the vast Pantanal flood plain at the height of its annual inundation. Understandably misinterpreting the flood plain as a gigantic inland sea, they named it after the local inhabitants, the Xaraies. The Laguna de los Xaraies began to appear on maps of the region and almost immediately began to take on a legendary aspect. To the north of the Laguna was believed to be the gateway to the Amazon and the Kingdom of El Dorado. Sadly, later explorers discovered that, in addition to the absence of El Dorado, the Paraguay River did not connect to the Amazon system.

Highly detailed, the map is covered in forests, mountain ranges, rivers, and lakes. Myriad cities and towns are labeled, including Asuncion (Assomption), Buenos Aires (Buenos Ayres), and Montevideo. The Rio de la Plata (Riv. De la Plata ou Paraguay) is the focal point of the lower half of the map, separating Argentina from Uruguay. South of the Rio de la Plata, the Pampas are labeled.