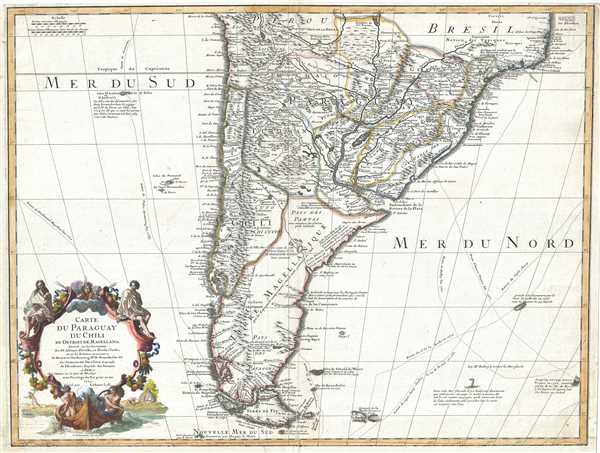 This is an extraordinary example of Guillaume Delisle's magnificent 1703 map of southern South America. It covers roughly from 18 degrees south latitude south to Tierra del Fuego, and includes the modern day nations of Paraguay, Chile, Uruguay and Argentina along with the southern portions of Brazil and Bolivia. The map renders the entire region in extraordinary detail offering both topographical and political information with forest and mountains beautifully rendered in profile.

This map, like most early maps of the area, offers a fairly accurate mapping of both the east and west coasts with exceptional detail. The interior is where this map gets interesting. Delisle was a cautious and scientific cartographer, who based his maps on the first hand reports from sailors, merchants and missionaries that, at the time, were flowing into Paris at an unprecedented rate. Consequently many of his maps offer significant cartographic advances over their predecessors. This map is no exception and Delisle credits the mappings and explorations of this region to Afonso de Ovalle and Nicholas Techo. The relatively easy navigation along the Rio de La Plata and its tributaries, as well as the relative narrowness of the continent and accessibility of the Pampas, offered ample opportunity for easy mapping. Nonetheless, Delisle's mapping of South America's interior is full of inaccuracy, curiosities, and ample fodder for the gold hunting European.

Our survey of the map begins with Delisle's suggestion that the Santa Cruz River, or the 'Rio St. Julien' as it is labeled here, connects (or nearly so) with the Rio de la Campana coming from the Pacific, thus connecting the Atlantic to the South Seas via an easy overland river route. The idea of a river route transversing Patagonia caught the European imagination in the early 18th Century. The writer Daniel Defoe proposes a similar route further north in his book A New Voyage and such concepts appeared in several maps of the period including Herman Moll's important map of the South Sea Company. Of course, the Andes were in fact an indomitable barrier and short of the treacherous Strait of Magellan itself, no such water route existed.

Some of the most interesting elements of this map appear far from the mainland in the surrounding seas. The routes of several important explorers are indicated including Pedro Sarmiento in 1589, La Roche in 1675, Halley in 1700, Amerigo Vespucci in 1502 and Captain Charp in 1681. The Falklands are depicted in an embryonic form as identified by Captain La Roche in 1675. Also notes Francis Drake's discovery of Cape Horn. In the lower right hand quadrant there is an interesting image of a stylized swan accompanied with a description in French, probably attributable to the explorer Lozier Bouvet, so charming that I felt obligated to translate and include here,

In this Glacial Sea there are many animals that are half bird and half fish; on the surface they pass like a swan coming out of the water only to take the air, the rest is always under water.

Also in the lower right quadrant Amerigo Vespucci's ship appears as he crosses into the Western Hemisphere. Slightly to the northwest of this little ship another island appears, supposedly discovered by La Roche in 1675, and is mostly likely a mis-mapping of South Georgia Island.

Altogether this is a spectacular map set in extraordinary conditions. Stands up to hours of perusal and presents dramatically.