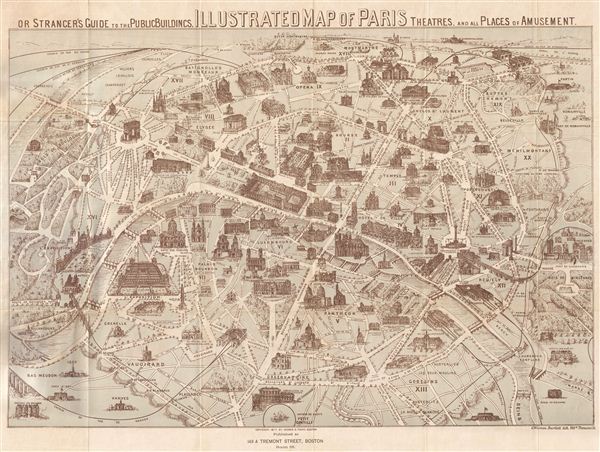 A fine example of G. Warren Bartlett's 1877 pictorial map of Paris, France. Bartlett most likelyisued this map in hopes of capitalizing on tourist traveling to europe for the 1878 exposition Universelle or third Paris World's Fair. Centered on the Seine River, the map covers central Paris and its immediate vicinity. The map features Paris divided into 20 arrondissments. The map offers extraordinary detail throughout, featuring important buildings and monuments shown in profile, including the Arc de Triomphe, Pantheon, l'exposition etc. Also features gardens, theaters, rivers, museums, roadways, and various other topographical details. Paris itself is set as if in a verdant garden surrounded by the Bois de Boulogne and various suburban villages. The eiffel Tower, built twelve years after this map was issued is not featured here. The map folds into a linen binder which includes a guide to the public buildings, theatres, cafes and various places of amusement within Paris. The map is dated and copyrighted 1877, by George H. Young and is part of Bartlett's Illustrated Map of London and Paris. The accompanying map of London is not present.

Very good. Typical wear on original fold lines. Folds into linen binder. Orignally bound with London map, which is not present.
Looking for a high-resolution scan of this?