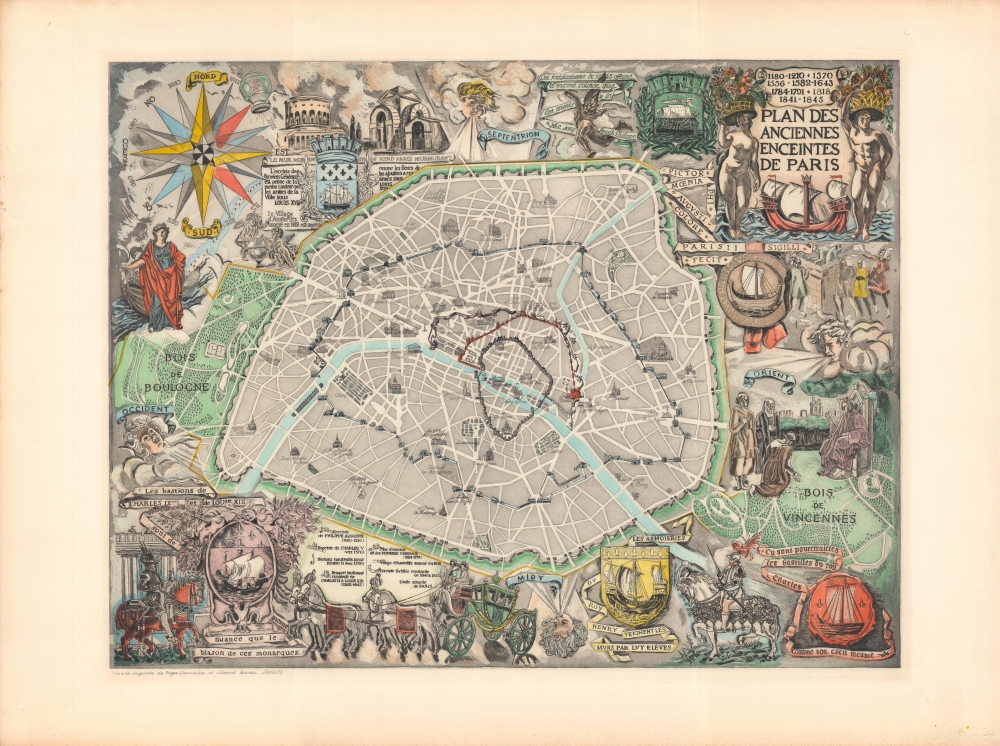 A curious and historically fascinating 1937 map of Paris by Roger Lacourière and Henri Clément Serveau. It highlights the city's evolution by way of tracing the development of its walls over the centuries. Stylistically, it is noteworthy for its resemblance to maps of the 16th and 17th centuries.

Coverage roughly corresponds to the modern borders of Paris, nearly a circle with two large 'wings' consisting of the Bois de Boulogne and Bois de Vincennes. Landmarks such as churches, train stations, parks, and cemeteries are indicated throughout. The outermost ring of fortifications, known as the Thiers Wall (named for the country's prime minister) date to the mid-19th century. This wall was immediately unpopular as it disrupted the easy connection between Paris and its suburbs, and while it did dissuade the Prussians from mounting a direct assault in 1870 - 1871, it could not prevent France's repeated losses on the battlefield. In a stunning volte-face, between late January and early March 1871, France and Prussia reached an armistice, a new but enfeebled French government was organized (led by Adolphe Thiers), left-wing parties took control of Paris, and the French army laid siege to the city, attacking the same walls that the Prussians had recently been bombarding, before storming the city in May and wiping out the communards. The ill-fated Thiers Wall was demolished in the 1920s and converted into civilian boulevards, including the Boulevards des Maréchaux and the Boulevard Périphérique.

The map is surrounded by illustrations and explanatory text on the history of the city and its walls, including drawings tracing the evolution of the city's coat of arms. The ship in the coat of arms originally was the seal of the Marchands de l'eau, a commercial guild that received royal permission to trade on the Seine in the 12th century. In the 1850s, the motto 'Fluctuat nec mergitur' (roughly, 'rocked by the waves but not sunken) was added, an apt choice as the city's subsequent history was quite turbulent, including the Paris Commune, the threat of invasion in World War I, occupation during World War II, and mass demonstrations in 1968.

Stylistically, the map is reminiscent of much earlier city plans, such as those in Braun and Hogenberg's Civitates orbis terrarum, and motifs from early modern maps such as the four winds. Its production technique was similarly old-fashioned; though made in the era of modern lithographic printing, it was printed using a plate that was engraved (or perhaps etched) to produce a print that was then hand-colored.

This map was made by Roger Lacourière and Henri Clément Serveau in 1937, and was likely based on a large mural of the same title by Clément Serveau that was displayed at the Musée Carnavalet. A map with a very similar title (OCLC 494643962) was published as part of Pierre d' Espezel's Paris relief: histoire de Paris des origines à nos jours in 1945 by Éditions Chantecler, but it looks to be an entirely distinct work rather than a later edition of the present map. The present map is not cataloged in the OCLC, but is held by the Musée Carnavalet. Lacourière and Clément Serveau only produced 150 prints of this map, making its appearance on the market a rare and special occasion.

Henri Clément Serveau (June 29, 1886 - July 8, 1972), often simply as Clément-Serveau, was a prominent 20th century French artist and engraver. He studied at the École nationale supérieure des arts décoratifs and the École nationale supérieure des beaux-arts under Luc-Olivier Merson, through whom he had the opportunity to design French banknotes. He quickly gained wide recognition, displaying his art at multiple esteemed salons. Experimenting with multiple styles and techniques, he was a prolific book illustrator in the years following the Great War, often employing woodblock printing. Later, he developed grand frescos and murals for artistic and technical exhibitions. Learn More...


Roger Lacourière (November 19, 1892 - August 17, 1967) was a French printmaker and engraver best known for his work with Henri Matisse and Pablo Picasso. Lacourière founded Éditions de la Roseraie in 1923 for publishing illustrated books, under the artistic direction of Édouard Chimot (1880 - 1959), and then in 1929 founded the printmaker Atelier Lacourière, which, upon his retirement, was taken over by his master printer Jacques Frélaut and became known as Atelier Lacourière-Frélaut. The firm closed in 2008, but Lacourière and his team have been recognized as among the most important French printmakers of the 20th century. Many of the most prominent French illustrators and engravers of the late 20th century worked there are one time. Lacourière was known for experimenting with the medium of intaglio printing, trying different materials and chemicals to produce new effects. Learn More...