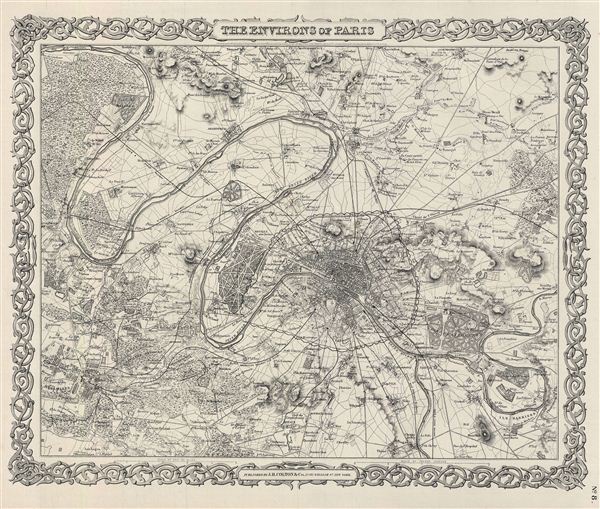 A beautiful 1855 first edition example of Colton's map or plan of Paris and its immediate vicinity. Map covers the Seine valley in a roughly 30 mile radius of Paris. Versailles appears in the extreme southwest and Vitry in the extreme northeast. Covers the embastilled center of Paris as well as the immediate environs including the 14 ring forts. Mostly likely derived form French military maps issued by the Depot de Guerre, this map reflects the transformation and modernization of Paris under Napoleon III and Georges-eugène Haussmann. Map offers extraordinary detail throughout showing forests, fields, individual buildings, gardens, estates, temples, farms, rivers, roadways, trains, and topographical features. Surrounded by Colton's typical spiral motif border. Dated and copyrighted to J. H. Colton, 1855. Published from Colton's 172 William Street Office in New York City. Issued as page no. 8 in volume 2 of Colton's 1856 Atlas of the World.