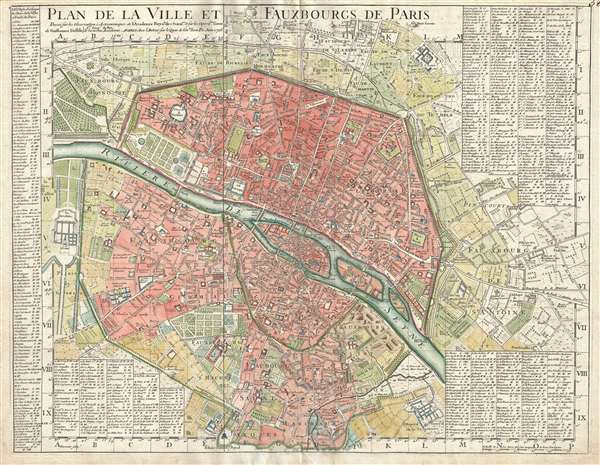 This is a separately issued 1716 Guillaume Delisle city map of Paris, France. This map depicts the city of Paris and its surroundings in the early 18th century. Paris proper stretches from the Tuileries gardens and the Louvre along the Seine (Seyne) to the contemporary location of the Jardin des Plantes, which is depicted on the map (although much smaller than the contemporary garden) and labeled as the 'Jardin du Roy' (the King's Garden). The northern reaches of Paris on this map appear to end near the community of Montmartre, which would not be annexed by Paris un 1860, when it would become the 18th arrondissement, or district, of Paris. The southern border of Paris was the northern half of the modern day 5th arrondissement and stopped short of the Luxembourg palace and the community of St. Michel, which is now a famous neighborhood in Paris.

Several recognizable locations from modern Paris are included on this map, including Notre Dame cathedral, the Palais Royale, the Place des Victoires, the Place Royale (Place de Vosges) and the Sorbonne. Le Marais, one of the most famous districts in Paris, is labeled. Le Marais has transformed over the history of Paris. During the 17th century, Le Marais was the preferred area of Paris for the French nobility to take us residence. Some of their residences, essentially urban mansions (hôtels particuliers in French), such as the Hôtel de Soubise and the Hôtel Carnavalet, are labeled on this map. By the 18th century, however, the area had been mostly abandoned by the nobility, leaving only minor nobles residing in the area. Following the French Revolution, the district was completely abandoned by the aristocracy, and became an active commercial area, hosting one of the largest Jewish communities in Paris. Also, the area around the Sorbonne is called 'Université' (University). Within the city proper, the detail is incredible. All the roads are labeled, as well as the churches, monasteries, and abbeys. Outside the Paris city walls, in the 'suburbs,' there are also several recognizable locations, including the Rue du Faubourg du Temple, Les Invalides, the Luxembourg palace, and of course les Champs Elisées, which is where the modern-day boulevard and the Arc de Triomphe are located. All the 'suburbs' (fauxbourgs) on this map have since been annexed by Paris and the names persist, because those neighborhoods are still known by the names on this map, even if they are a part of Paris itself.

The map is surrounded by a 'Table alphabetique des rues de la Ville et Fauxbourgs de Paris' and gives the grid location of each of the rods in Paris, in alphabetical order. This inclusion means that this map was not only meant to be attractive, but practically used. This map also includes, underneath the title, the addition of the phrase 'Ier geog(raphe) du Roy', denoting that Delisle was the official royal geographer. Deslisle did not earn this title until 1718, which means that example of this map is likely a second edition, dating from 1720.

This map was published by Guillaume Delisle in 1720 from his workshop on the Quai de l'Horloge in Paris. It was engraved by Desrosiers. This map is separately issued and was not uniformly bound into any atlases leading to it being quite rare today.